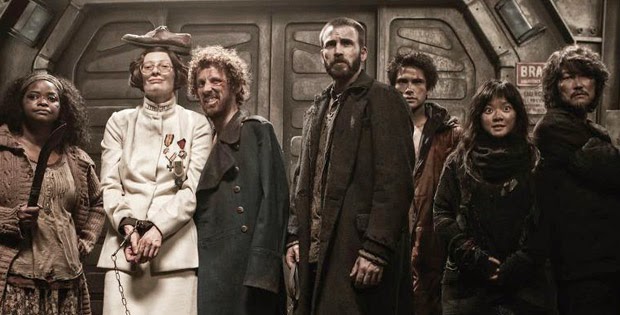 From acclaimed director Bong Joon Ho (The Host, Mother, Memories of Murder), and executive producer Park Chan-Wook (Oldboy), a new sci-fi epic based on the French graphic novel, featuring a powerhouse international cast. It’s been 18 years since a failed global-warming experiment froze the earth and killed off most life on the planet. The few remaining humans live on the Snowpiercer, a train on an infinite loop around the globe. For those at the front, it’s a lavish paradise of drugs and sushi in the lap of luxury; for those trapped in the tail section, life is short and cruel.  But change is in the air. Curtis (Chris Evans), desperate to escape the tail of the train, plans an uprising, aided by his mentor Gilliam (John Hurt). What begins as an isolated riot explodes into a mass revolution, an all-or-nothing push to the front of the train, and a war for humanity’s future. Also staring Tilda Swinton, Ed Harris, Jamie Bell, Octavia Spencer and Song Kang-ho.

Thanks to those lovely folks at Cinema Nova and SNOWPIERCER, exclusively at Cinema Nova from July 24th, we are giving you the chance to win one of 10 Double Pass for a Preview Screening on Thursday July 17 at 6.30pm.

Terms and Conditions:
Only entries made via the the comments on the Facebook post will be included in the draw.
All entries will go into the All Star Barrel and winners will be drawn at random.
Entries close 6pm Monday the 14th of July and winners will be announced Tuesday the 16th.
Winners will be notified how to collect their tickets via private message on Facebook.

Special thanks again to Cinema Nova and SNOWPIERCER, exclusively at Cinema Nova from July 24th

For more info head to: http://www.cinemanova.com.au/catalogue/coming_soon/42419

Posted by All Star Comics Team at 1:44 PM