ALL STAR RECOMMENDS FOR OCTOBER 13TH 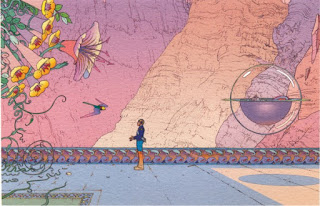 No time for greetings, did you hear the news?

Save your pennies, prepare to sell your bodies, souls, lifeblood, life…uh…seed, anything you can for next year because Marvel, Dark Horse and Fantagraphics are together conspiring to take all your money and mine, collectively wiping us out with a plan so fiendish and diabolical it would be shocking if it wasn’t just so perfect.

Marvel has finally worked out some copyright mojo and have announced that the near mythical Shang Chi: Master of Kung-Fu series from the ‘70s-‘80s will finally be collected in a series of four omnibus editions. This really is the holy grail of Marvel collections (Rom aside) and for decades the series has sat uncollected due to the inclusion of Sax Rohmer’s Fu Manchu character as the book’s antagonist. No word as yet as to how the rights were untangled, but give me a name, Marvel, and a bouquet of roses shall be express delivered to this particular legal wizard.

Dark Horse has worked out some similar copyright wizardry, announcing the arrival of The Moebius Library next year, meaning that all those strips I talk about every week in the Heavy Metal recaps and many, many more will be bound together in a collection of premium hardcovers. No word yet as to how the copyright was cleared up here either, but again thank you oh wondrous comic book legal people!

2016: A fine time to be financially poor, for we shall be rich in comics excellence. 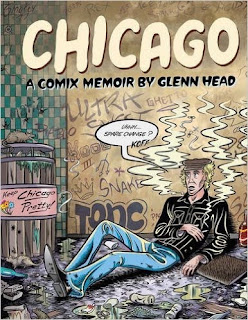 COMIC OF THE WEEK : CHICAGO
By Glenn Head
Published Fantagraphics

Glenn Head’s magnificent “comix memoir,” Chicago, opens with the following quote from George Orwell: “Autobiography is only to be trusted when it reveals something distasteful.” It’s a message Head seems to have taken to heart, depicting himself utterly warts and all and has created a riveting memoir that should be on every single art student’s Must Read list.

Beginning in June 1977, we find teenaged Glenn Head living in the lap of suburban luxury in Maddison, New Jersey. His father works on Wall Street and has given Glenn everything he ever wanted or needed, but Glenn chafes against this upper Middle Class lifestyle and the boredom of suburban life and wants out to pursue his artistic dreams. Enamoured of the underground comix scene and packing both a modicum of talent and an ego the size of a Robert Crumb girl, Glenn’s off to a Cleveland art school, paid for by his concerned father who may not understand Zap Comics but wants his son to be not only happy but to have the best education possible to achieve his dream of becoming a successful comics artist.

Once at art school Head quickly alienates everybody, teachers and fellow students alike. His attendance and lifestyle become so strange and erratic that he’s suspected of having mental health issues. Finally deciding that school can’t teach him anything worth learning and harbouring a dream to cartoon for Playboy, a deluded, arrogant Head, without telling anyone, packs up yet again and hitchhikes to Chicago with literally no money in his pocket and no place to stay, determined to make it in the comics biz.

Head depicts his young self with absolute ruthlessness, presenting all his teenaged self’s arrogance, ignorance, ingratitude and foolishness. Young Head is constantly oblivious to the dangers he regularly puts himself in and is so clueless about Chicago he actually seems surprised when a chilly wind hits. Chicago very quickly becomes something almost akin to a survivalist tale as Head scrambles to keep himself fed, rested and safe.

The late ‘70s are beautifully realised, from its fashions to its food choices to its automobiles and buildings. With his authentic underground comix style, Head re-creates a kind of comics verisimilitude in that Chicago could easily sit next to other comics created during the period and on a casual flip-through, you’d swear the book itself was a product of the ‘70s. Highlights include visits to the Playboy offices, dinner with Robert Crumb and a chance encounter with Muhammad Ali that has to be seen to be believed.

Chicago is almost impossible to put down. I read it in a single intense session, grimacing the whole way through, stomach in knots, half of me wanting Glenn’s hubris-born comeuppance to be swift and harsh, half of me wanting him to just return home, embrace his long-suffering father and get his shit together. It’s a ballsy book with a scary ring of truth about it, a hideous warning about the traps awaiting the artistic ego, a rollicking trip through the late ‘70s and a brilliant recreation of a very different publishing and creative climate. Marred only by a jarring time-jump, Chicago is still yet another contender for your bulging annual Best Of list. 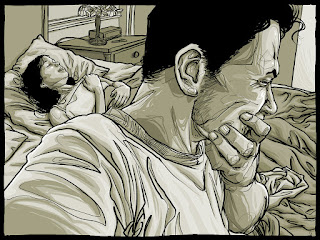 WEBCOMIC OF THE WEEK : ACHE
By Mike Walton

More dental-based horror this week, a week I learned I have to have a tooth pulled – weird that I just featured Sloane Leong’s Clutch in this very space…I wonder if subconsciously I suspected some bad dental news.  Anyway, Ache comes from False Positive, a site filled with webcomics by the very talented Mike Walton. I wish Mike’s site had less ads flashing at me and a more user-friendly layout (scrolling pages rather than clicking through), but his comics are easy on the eye even if his site is not.

The story of a man who attempts to extract a sore tooth himself but gets way more than he bargained for, Ache is a perfect little pre-Halloween warm up for you. 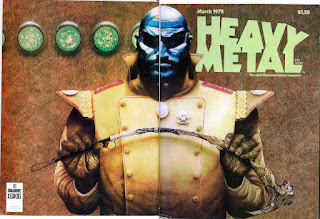 I  feel as though I’ve been writing about Richard Corben’s “Den” forever, so it’s somewhat bittersweet that this serial ends in this March ’78 issue (barring an epilogue next issue), with an explosion and the kind of nonchalance from its protagonist worthy of a Robert E. Howard character. “We are alive and well,” Den says, “That is all I care about now.” It’s astonishing that Corben remains as prolific as he does almost forty years later, and his art hasn’t skipped a beat. So much of “Den” (for me anyway) has been about Corben’s intricate and psychedelic skies, so it’s fitting that out hero flies off on his ginormous winged lizard into a sunset all the colours of a swirling, retro Batik dress. We’ll say our proper goodbyes with the epilogue next week, but “Den” is still an astonishing achievement.

Mora and Garcia’s “The Winter of the Last Combat” has its second and final chapter, with Mora’s elegant black and white art recalling the photo realism of Arthur Ranson and bringing to wonderfully gloomy life this story of a crusader now “disgusted by men and the God in whose name they pillage and murder.” Gloriously existential, our fever-plagued hero makes his way through landscapes both hallucinated and real, muttering that “there is nothing except man, man battling against others, against the world…man questioning himself eternally about what it all means.” This is, naturally, excellent and brooding Euro comics.

Onto the letters column, where it’s heartening to see that it wasn’t just your humble reviewer, writing from the next century, that found December 1977’s issue to be rather lack lustre. Reader R. Gomez, clearly angling for my job, offers, “…the flow of ingenuity seems to have been shut down to the merest trickle.”

But not so fast, Gomez! Philippe Druillet’s “Urm” has its second part here and remains a roaring return to form for its creator. Druillet’s splash pages are worthy of wall-hanging, his layouts symmetrical, his panels beautifully balanced in their use of comic’s space. Not much plot this issue, but with art this sinister yet gorgeous, who cares?

The legendary Gray Morrow’s fantastical “Orion” debuts in full colour, having originally appeared in black and white in Wally Wood’s Image-before-Image anthology comic, Witzend. There’s also more “Barbarella,”“1996,”“Airtight Garage,” the beautifully dreamy, “Underground Comic” by Stuart Nezin and even a self-portrait by Charles Vess to round out this issue’s substantial highlights.

The French, once again proving themselves number one, have released Atsushi Kaneko’s Deathco in their native language. Publisher Casterman has also put together this trailer, giving the inky, over-the-top violence of Kaneko’s latest work the kind of motion comics treatment I usually roll my snooty eyeballs at. It’s Kaneko though, okay? Look at how crazy his latest work is!

I picked up the first two volumes of Deathco in Japan and once again it makes me terrifically sad that nobody seems to want him in English. I don’t understand. An assassin’s guild, a teen girl killer protagonist with a pet bat who floats around by hanging onto a bunch of black balloons, and more casual mayhem than I can recall seeing in the first hundred-odd pages of anything, it’s an utter mystery why his work is continually ignored by US publishers.

Please take a look at this festival punk de violence et d'hemoglobine and just see if you don’t agree.

Cameron Ashley spends a lot of time writing comics and other things you’ll likely never read. He’s the chief editor and co-publisher of Crime Factory (www.thecrimefactory.com). You can reach him @cjamesashley on Twitter.
Posted by All Star Comics Team at 9:07 AM