ALL STAR RECOMMENDS FOR OCTOBER 27TH 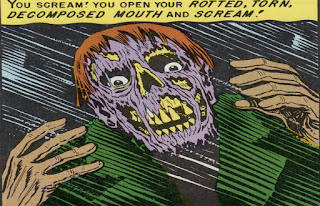 I was pulled from my mother’s birthing bits feet first early one Halloween morning eons ago, clearly difficult even from the very start. This week I hope you’ll allow this Halloween baby an extra indulgence as I go all-horror with one of my favourite comics stories ever – the classic “Love and Death” from Saga of The Swamp Thing, present a webcomic displaying the ultimate in culinary nastiness, include the first ever episode of the Tales From The Crypt TV show and, for this week only, skip ahead in the Heavy Metal recaps to October 1979 for a self-contained, all-H.P. Lovecraft issue of HM.

So stock up on comics instead of candies this Halloween and feel free to share the seasonal joy and let me know some of your favourite ever horror comics! 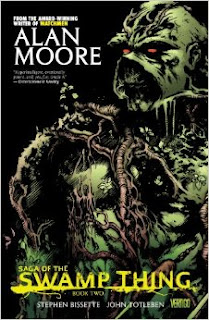 COMIC OF THE WEEK : SAGA OF THE SWAMP THING BOOK TWO 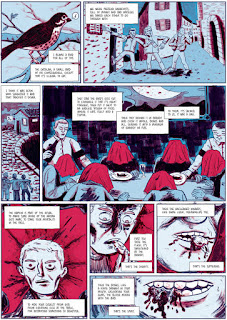 WEBCOMIC OF THE WEEK : FINAL MEAL


By Christopher Sebela and Zack Soto

The tale of a man whose palate craves not the varieties of the flavour spectrum, but the spice of cruelty itself, Final Meal builds with the inevitability that the title implies. However, with writing as strong as Sebela’s and art as moody and crisp as Soto’s, the almost anti-climactic nature of the story’s conclusion should not affect your overall reading pleasure.

Taken to a mysterious, exclusive restaurant to experience the ultimate in his cruelty “food fetish,” out narrator relates his strange journey all over the globe to find the food that has suffered the most in its preparation. Soto’s moody, lively cartooning brings to life the insanity and desperation of this character’s quest and his flesh-based meals are rendered with appropriate grotesqueness.

Liable to nudge guilty meat-eaters (like me) or lapsed vegetarians (again like me) further towards plant-based diets, Final Meal packs an EC-esque irony that’s just perfect for the season. 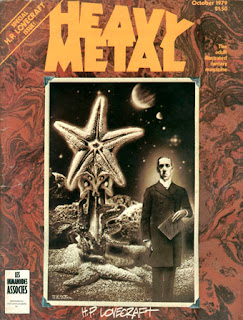 COUNTDOWN TO MOZ METAL: HEAVY METAL OCTOBER 1979
Yes, thanks to the magic of living in the present, we are fast-forwarding a year and a half this week to a special Halloween issue of Heavy Metal, the Lovecraft-inspired stand-alone issue published in October 1979. Normal service will resume next issue, as (among other things) Philippe Druillet’s “Urm The Mad” concludes, and if you think I’m done drooling over Druillet, you couldn’t be more wrong.

As usual, the October 1979 issue is beautiful to look at, playing host to a number of incredible European creators. Sadly, however, the substance just isn’t there overall, with most of the material ending up as either narrative throwaways or curios, Lovecraftian only in name rather than execution. The editorial notes the diversity of the stories within and wisely tries to offer some cohesion to the issue by suggesting the focus is on “two of HPL’s most characteristic obsessions…the fear of something huge and powerful that is outside but wants to get in and the awful attraction effected by dark and smelly holes. You witness, Dr. Freud.”

The absolute star of the show is Alberto Breccia, who skilfully and beautifully adapts HPL’s “The Dunwich Horror” with his none-more-black, charcoal-smeared art and heavy use of captioning. It’s a perfectly moody and evocative fit for HPL’s lengthy 1928 classic which, like last week’s Rat God by Richard Corben, moves the cosmic terror to a slightly more rural setting.

“Good day, Lovecraft, I am the President and I wish to hunt the Ktulu!” And with that goes any hopes that the mighty Moebius might take this assignment – to which he seems indelibly suited – with any seriousness. Instead, the artist delivers “Ktulu,” a story still stunning in its visuals even if it falters as an examination of the work of Lovecraft. This story of a group of politicians entering a “gigantic cavern,” interdimensional in nature, to hunt “Ktulu” like big game still carries that trademark Moebius dreaminess and gorgeousness, yet unfortunately it has not the space nor the seriousness of intent to follow up on just how cool that premise actually sounds. An Elder God safari hunt. I’d write the shit out of that. I suspect most of you would too.

Terrance Lindall’s “Xeno Meets Doctor Fear And Is Consumed” continues the surreal dreaminess established by Moebius, but similarly offers little and I’m actually beginning to wonder if it’s a page count restraint rather than an imaginative laxness that’s the issue here, for like “Ktulu,” “Xeno…” feels as though twenty-odd pages have been somehow hacked from it.

Alain Voss’ “The Thing,” is striking in its Rick Geary-goes-Pointillist inkiness. It captures the overwrought verbosity of much of Lovecraft, but pastiches it in this tale of an interdimensional portal accessed via catacomb…and telephone. It’s a pretty and enthusiastic piece though and ending with the madness that afflicts so many a Lovecraft protagonist who plunges into the unknown it gets the thumbs up for both being an attractive comic and actually meeting the brief somewhat.

All hail Druillet (again)! His “Excerpts From The Necronomicon” proves a highlight from the issue and thankfully at that, as HPL is one of Druillet’s most profound influences. Presented as though torn from the Necronomicon itself, Druillet’s inky, scratchy pages have the look of deliberate, spontaneous haste about them, the look of the work of a man detailing indescribable horror and sketching the creatures that lay beyond the realms of our perception. Perfect in their rushed, scrawled appeal, their indecipherable cursive script, they have the vague look of pages from the Necronomicon Ex Mortis; the book of the dead featured in the Evil Dead. Many more pages would’ve been appreciated, particularly as they were actually drawn but not included, such as:

While this issue is pretty hit and miss and as such will be a bit of disappointment for any serious Lovecraft fan, any doubts over whether or not it’s worth even the most cursory of flip-throughs should be dispelled with this, a Walt Simonson drawing of Cthulhu. Truly, I am your Halloween fairy: 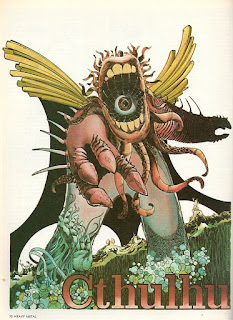 COMICS VIDEO OF THE WEEK : TALES FROM THE CRYPT: THE MAN WHO WAS DEATH

Rounding us out this week is the first ever episode from the ‘90s HBO Tales From The Crypt series, inspired (of course) by the notorious EC comics of the same name. Still one of the most highly-regarded instalments of the series, “The Man Who Was Death” finds Bill Sadler playing Niles Talbot, an executioner forced into unemployment when the death penalty is repealed. Instead of finding a 9 to 5 like a regular Joe, the justice-dispensing Talbot hits the streets, arranging electrocutions for those who escape the courts justice. In true EC style, the results of his actions are deliciously ironic.

Directed and co-written by The Warriors’ Walter Hill and acted with total relish by Sadler, “The Man Who Was Death” is a fine way to spend a lazy 25 Halloween minutes as you await potential trick or treaters.

Cameron Ashley spends a lot of time writing comics and other things you’ll likely never read. He’s the chief editor and co-publisher of Crime Factory (www.thecrimefactory.com). You can reach him @cjamesashley on Twitter.
Posted by All Star Comics Team at 8:53 PM