ALL STAR RECOMMENDS FOR JULY 5TH 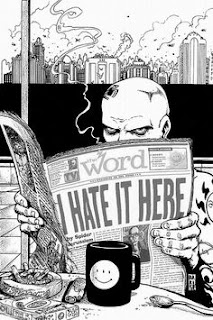 The nation goes to the polls!

It’s Election Day as I type this bit, occurring in possibly the most depressing political climate of my adult lifetime. Where is Spider Jerusalem, outlaw journalist when you need him? Ah, yes, that’s right, he’s in the future. Shame. I can think of numerous current incumbents in need of both a potentially libellous dressing down and a bowel disruptor blast. Personally, I want to see politicians of both major parties sweating profusely, panicked as a mammoth mob of angry voters tired of it all descends to metaphorically burn them all down. I shan't hold my breath, however.

Anyway, I hope you voted and voted well (should you be of age) and, whatever your political leanings, that you’re reading this with a renewed sense of optimism and positivity for the future of this grand nation and, yes, even the world. I somehow doubt it, though. The world right now feels like a nightmare Warren Ellis had during that time he tried to quit cigarettes cold turkey.

But at least we have comics. Good ol’ comics... 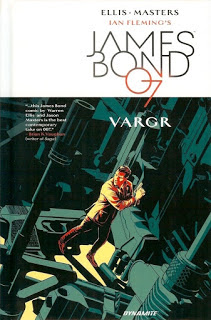 If, like me, you’ve somehow got this far in life without ever actually reading an Ian Fleming James Bond novel, this new comics series from Dynamite, collected in a handsome hardcover edition, might come as a bit of a surprise. The new comics-Bond, ripped from the books rather than the films, drinks neat bourbon instead of a martini shaken not stirred (Bond trivia titbit: bourbon is Fleming-Bond’s drink of choice when not in a social setting), makes a bomb with little more than plastic explosive and a cigarette, and in the cold open to issue one throws cinder blocks at his enemy before engaging him in a shovel fight. Gone is the camp satire of the pre-Daniel Craig films and gone also is the international jet setting playboy vibe that the Craig films (well at least the first two) maintained for their protagonist. Back is the short black hair and the scar on the cheek of Fleming’s murderous professional. It might all seem at first like “low budget Bond” as our protagonist is still the international superspy but his destinations are factories and laboratories, not lavish casinos or beach resorts but it is grimily 2016 and, for my money, drags its sociopathic 00 Agent into the modern day far more successfully than even the recent crop of films.

“Vargr,” the first story arc in this new series by writer Warren Ellis and artist Jason Masters is obviously as real world as it can be. Ellis, ever the futurist writer, hits the perfect pitch of conspiracy, speculative technology, violence and, yes, dapper sartorial choices for his legendarily English pulp character. Although this may well be the most grounded Bond tale yet told, he’s smart enough to work the classic Bond tropes in with the realism – there's a death trap, a dangerous, oddly-named femme fatale as well as cool cars, gadgets and villains “augmented” in the form of cutting edge prosthetic limbs. Still, “Vargr” is so restrained in its use of fantasy that it’s almost a shock at first. Comics require no real “production budget” (outside of the obvious) and the temptation to go balls-out, Moonraker bonkers must have been tempting to someone along the way. There is much irony in the fact that the most “stripped back” Bond I’ve ever encountered comes from the medium with the greatest history of melodrama and things blowing up spectacularly and ridiculously.

This is not to suggest there is no updating of the mythos, however, as gone is the misogyny and sexism found in much of the (filmic) canon. In fact, outside of some flirting with Moneypenny (who out-euphemisms our hero on a constant basis) Bond’s only near-sexual experience almost ends in his death. This lack of amorousness is also in keeping with Fleming-Bond, as this handy and excellent piece on the superiority of Literary Bond to cinematic Bond tells us: “As for women, Bond was no lothario. He just couldn’t land the right girl before she got killed (like Vesper Lynd in Casino Royale) or deserted him (Tiffany Case in Diamonds Are Forever leaves him for an American Marine officer).”

Structurally, “Vargr” is terrific, with the gritty violence of the cold open setting not just the tone but mimicking the structure of the films in the most perfect way possible – you open the hardcover, Bond kills his target after lobbing cinderblocks around in a deserted night-time construction site, and then we hit the credits. You almost expect that iconic brass dah-dah-dahhhh-dah-dah-dahhh to hit and Shirley Bassey to start belting out some overly theatrical number, if only that were not completely anathema to the tone of this series. It’s the thoughtful little touches in structure and production like this open-credits-plot structure that really push this comic up an extra notch in quality, enabling it to beautifully occupy the space between prose and moving image as only comics can. Ellis’s scripts maintain the widescreen feel of his recent work, with horizontal panels feeling open and cinematic and all of the pages are just stuffed with detail by Masters, who surely 3D modelled every environment of the story, from offices to factories. Masters’ figures, perfectly designed (his Bond somewhat resembles a Don Draper addicted to murder instead of infidelity), may feel a little static at times, but the settings he creates are completely immersive; it’s like watching a film shot entirely in deep focus.

The violence is brutal and real with brains exploding in loose gelatinous blobs from frequent head shots. The hand-to-hand combat is fought in close quarters with the resulting strikes/stabbings/chokeholds proving fittingly visceral – props to Masters for bringing the action to gritty life. The glamour of Bond is stripped right away as never before as a result of this care, this careful scrubbing away of glitz and wealth, and the injection of visual noir elements to many of this story’s settings.

Then there is the grunt of the nine to five. Bond eats in the MI6 cafeteria, deals with regulations and is presented as, essentially, a murderous bureaucrat, punching the tickets of the Queen’s enemies at the behest of management. Lines like, "No tradecraft required. All I had to do was locate the actor in question and eliminate him," recreate the affectless banality of the murder trade that Fleming made such a core character trait, as this line of Fleming dialogue clearly expresses (taken again from the article previously linked), “It’s not difficult to get a Double-O number if you’re prepared to kill people. That’s all the meaning it has and it’s nothing to be particularly proud of…it’s one’s profession, one does what one’s told."

The drudgery of office work, of having bosses, of having your hands needlessly tied up in red tape is perfectly explored, exfoliating away all the romance and potential power fantasy suggested in classic Bond titles like On Her Majesty’s Secret Service. Yet Ellis peppers in enough gags to remind the reader that, despite how this much this review may celebrate the grimness, this is *not* "Zach Synder’s James Bond."

I don’t want to reveal any plot as the comic fairly whizzes by with its clean, open pages, but it’s crackingly Bond in its mix of the speculative and/or bizarre with the espionage. “Vargr” really is the perfect marriage of creator and licence. Lines like “Causing outbreaks of the future is hard...” remind readers that this is very much a Warren Ellis comic and can be enjoyed purely as such, but with its structure and attention to detail and immersion in Literary Bond, it’s hard to imagine Fleming fans being upset with this new version of England’s most enduring action hero – in fact, a friend of mind, a big Fleming fan, loved it. I’m desperate to read the prose books now. Maybe next vacation.

The wonderful, thriving, advanced and distinctly multicultural Europe depicted within "Vargr" may sting some readers given the insanity of the EU over the past weeks and the rise in hate crimes as a result of Brexit, but there's no denying that the current political climate provides a wealth of material for Ellis and Masters to sink their teeth into for "Eidolon," the forthcoming second arc in this series. 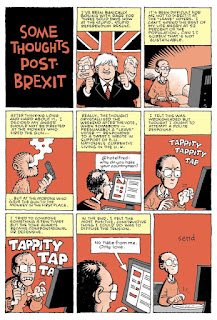 WEBCOMIC OF THE WEEK : SOME THOUGHTS POST-BREXIT
By Roger Langridge

"I decided that my anger should not be directed at the monkey who fired the gun," Roger Langridge writes rather generously, "but at the morons who gave the gun to the monkey in the first place."

Created rapidly and spontaneously, this two page comic by Langridge is absolutely must read. I can't say much more than that.

COMICS VIDEO OF THE WEEK : V FOR VENDETTA: THE REVOLUTIONARY SPEECH

Cameron Ashley spends a lot of time writing comics and other things you'll likely never read. He's the chief editor and co-publisher of Crime Factory (www.thecrimefactory.com). You can reach him @cjamesashley on Twitter.
Posted by All Star Comics Team at 11:29 AM