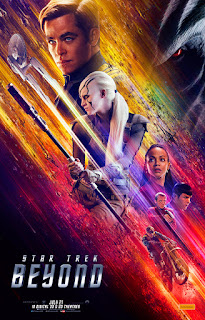 "Star Trek Beyond," the highly anticipated next installment in the globally popular Star Trek franchise, created by Gene Roddenberry and reintroduced by J.J. Abrams in 2009, returns with director Justin Lin (“The Fast and the Furious” franchise) at the helm of this epic voyage of the U.S.S. Enterprise and her intrepid crew. In “Beyond," the Enterprise crew explores the furthest reaches of uncharted space, where they encounter a mysterious new enemy who puts them and everything the Federation stands for to the test.

Thanks to the folks from Paramount Pictures and STAR TREK BEYOND in cinemas JULY 21, we are giving you the chance to win one of five in-season double passes to see the film!

To go into the draw for your chance to win all you need to do is tell us, "in tribute of Star Trek's adventuring spirit, if you could go anywhere, where would you boldly go?"

-Only entries made via the comments on the Facebook post will be included in the draw.
-All entries will go into the All Star Barrel and winners will be drawn at random.
-Entries close 6pm Monday the 18th of July and winners will be announced Tuesday the 19th.
-Tickets will only be available to pick up from the store and winners must produce photo ID upon pick up.
-Tickets MUST be picked up no later than a week after the draw. Any remaining tickets after this date will be given away at our discretion to make sure they don't go to waste.
.