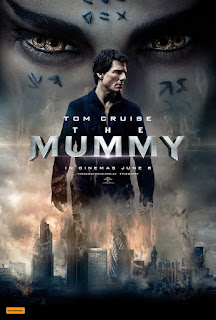 Thought safely entombed in a crypt deep beneath the unforgiving desert, an ancient queen (Sofia Boutella of Kingsman: The Secret Service and Star Trek Beyond) whose destiny was unjustly taken from her is awakened in our current day, bringing with her malevolence grown over millennia and terrors that defy human comprehension.

From the sweeping sands of the Middle East through hidden labyrinths under modern-day London, The Mummy brings a surprising intensity and balance of wonder and thrills in an imaginative new take that ushers in a new world of gods and monsters.

Thanks to those well preserved folks at Universal Pictures and The Mummy in cinemas June 8th, we have 5 Double In Season Passes to give away!

To go into the draw for your chance to win all you need to do is comment "My Mummy is great and all but I'd rather see this film with  ______ . " and fill the blank with a tag of the person you think would make a better movie date than your mum and you'll be entered in the draw.

-Only entries made via the comments on the Facebook post will be included in the draw.
-Entries will be "liked" by All Star to notify the comment have been entered in the draw,
-All entries will go into the All Star Barrel and winners will be drawn at random.
-Entries close 6pm Monday the 5th of June and winners will be announced Tuesday the 6th and notified soon after as to how to collect their tickets.

A huge thanks again to Universal Pictures and The Mummy, in cinemas June 8th
Posted by All Star Comics Team at 11:06 PM