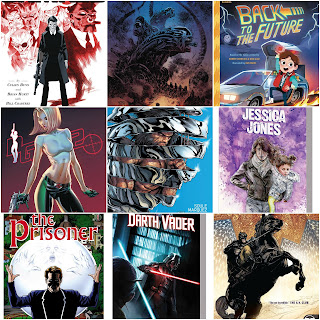 WOAH! Not long to Free Comic Book Day now...guess we should really start our prep for it, right? ;)
Of course there is plenty of new reads expected for this week that should tie you over.

Marvel's mightiest mutant has been resting in peace for some years, but now the return of Wolverine begins in the HUNT FOR WOLVERINE #1. Prepare for the return of the best there is, even if what he does is hiding from everyone he knows and loves.

Follow the cases of hard-boiled detective Alack Sinner in the
ALACK SINNER AGE OF DISENCHANTMENT TP! Featuring detective stories in the traditional fashion, imbued with the politics of the 70's and ensuing decade.


It all comes down to this, the finale to the epic "Death of the Mighty Thor" story concludes in MIGHTY THOR #706 LEG. Don't miss Jane Foster's last stand before the Gates of Valhalla.

Treat yourself to a copy of ALIENS DUST TO DUST #1 (OF 4) for Alien Day, this coming Thursday! Witness the fight for survival as a mother and son attempt to evacuate a colony on LV-871, the only thing in their way? Aliens, of course!

IDW celebrates a milestone with J SCOTT CAMPBELL DANGER GIRL 20TH ANNIVERSARY! Presented in its pages are the original black-and-white pencils of J. Scott Campbell's first two stories of Danger Girl, free from any pesky lettering. If you love all action and no talk, this is the book for you.

Before one of the biggest weddings of the year, revisit Batman's journey of renewal and redemption in BATMAN TP VOL 05 RULES OF ENGAGEMENT REBIRTH! Can Bruce Wayne evolve into a better hero, a better Batman, and will that make him, ultimately, a better husband?

From DC's Young Animal imprint, Lee and Michael Allred bring you:
BUG THE ADVENTURE OF FORAGER TP. Collecting the first six issues, watch as Forager seeks the metals he needs to protect and preserve the Multiverse, as well as keep it out of the hands of General Electric.

Let the tones of David Tennant's will-bending voice infect your mind as the character he brings to screen, Kilgrave, returns to comics in JESSICA JONES TP VOL 03 RETURN OF THE PURPLE MAN. Jessica Jones has faced him down before, now she has her own child to protect, the stakes have never been higher.

Featuring Cole Cash, aka Grifter, SLEEPER TP BOOK 01 collects the hero's earlier Wildstorm classics. Also featured is an early appearance of one of comics greatest creative parings Ed Brubaker and Sean Phillips with the tales of Holden Carver with a heavy dose of undertones of noir and spy-thriller action.

With his new lightsaber completed and Jedi Master felled by his hands,
STAR WARS DARTH VADER DARK LORD SITH TP VOL 02 LEGACYS END continues the new Sith Lord's 19 year journey to "A New Hope"! His mission this time: to protect the head of the Jedi Archives, Jocasta Nu?! No, you didn't misread that, so check it out to find out why Jocasta is wanted, alive, not dead.

Peter Parker may be swinging around New York once more, only years prior was Doctor Octopus filling that role in SUPERIOR SPIDER-MAN TP VOL 01 COMPLETE COLLECTION! Revisit Doc Ock's reign as the Superior Spider-Man, from his takeover of Peter's body to his recreation of the Raft Prison into Spider-Island II! Along the way, meet new friends, like Anna Maria Marconi, and witness the rise of old fiends, with Phil Urich becoming the Goblin Knight! It was a strange period for Spidey, but one of the best!


The heroes of Baldur's Gate return home in DUNGEONS & DRAGONS EVIL AT BALDURS GATE #1! The heroes destinies lie before them, but trials await before they can be claimed.

A danger dwelling beneath our feet, DEEP ROOTS #1 shows what happens when the roots of plants under our feet rebel! It is up to a band of humans to put the plants back in their place and save mankind.

Return to the world of the cult TV series in PRISONER #1, timed to coincide the 50th anniversary of it's American broadcast.

It's the movie everybody loves and now it's time to look back to the past with
BACK TO THE FUTURE POP CLASSIC ILLUS STORYBOOK HC! Re-experience the film classic with artwork from Kim Smith, from Doc Brown's first demonstration of the time machine to Marty reuniting his parents. Fun for the whole family!

Historian/detective Nick Travers returns in CROSSROAD BLUES OGN, hired to track down a missing college professor from New Orleans. Along the way, Travers will encounter a variety of characters, such as an eccentric albino named Cracker and a hitman who sees himself as the second coming of Elvis.

Meet Eddie, a regular enough dude except for two things: one, he can't stay dead and two, he runs a nightclub where demonic beings are barred! Experience the drama of the first five issues in this demon filled gangster tale from the creators of Sixth Gun, the DAMNED TP VOL 02 ILL GOTTEN.

Remender is getting all his creator owned ducks in a row.
Heath Hudson 50's space adventuring with a difference returns to Image with
FEAR AGENT FINAL ED TP VOL 01! This brand new edition features never-before-seen scripts from Rick Remender, all the variant covers, character designs and concept art. Whether you're a long-time fan or a newcomer looking for sci-fi thrills, the Final Edition has enough to keep you coming back again and again!

It's 1998 and Chris has started work at a vinyl record store, every teen's dream, in
HEAVY VINYL TP (FORMERLY HI-FI FIGHT CLUB). But when the lead singer of the store's favourite band disappears, Chris will learn that her store hides a secret: they also double as a vigilante squad!

Experience the story of a transgirl in PERVERT OGN, her survival in Seattle through sex work.

Not sure what to order? Need a comprehensive guide? Then PREVIEWS #356 MAY 2018 is the volume for you! Jam-packed with upcoming releases, don't miss a book and be sure to place your orders with the next Previews Album coming your way soooooon!

And there we have it. A great line up, treasures galore, spot one you need, just be sure to let us know before close on Tuesday night for us to get you sorted!
Until next time we see you stay super and love those comics.