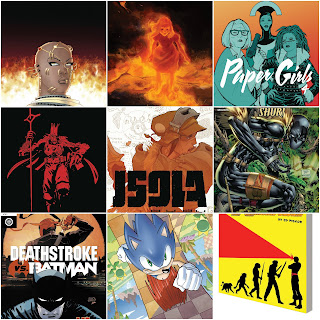 Hope you enjoyed your Easter break but now it's time to settle in for the week ahead and what better way to do that then planning what will be on your reading list this week?!

Also don't forget you can buy tickets for our Avengers Infinity War screening in store now and details for our Free Comic Book Day celebration will be going up very soon!
But now this week's comics.

The Marvel Universe is under attack by a species known as The Poisons that hungers for super-powered symbiotes in the follow up to the popular Venom event, VENOMIZED #1 (OF 5)

Joe Chamberlain would do anything to save his small, forgotten town, even make a deal with the devil and by bringing the curse of Brimstone on himself. Next in the line of DC's new Age Of Heroes titles,

THIS IS A SEQUEL!!!
Frank Miller's takes us back to the world of 300 in this much anticipated companion to his masterpiece.
XERXES FALL OF HOUSE OF DARIUS #1 (OF 5)

In a brand new adventure and return to comics, Sonic is racing around the world to shut down the robotic Badnik forces, in the new IDW series, SONIC THE HEDGEHOG #1.

With the security of the internet totally destroyed. Secrets are no longer sent over the web, they're entrusted to armed couriers called Ledger Men, who must battle danger that lurks around every corner in the new series from Image, ANALOG #1.

From childhood friends Brendan Fletcher and Karl Kerschl comes a breathtaking fantasy adventure in the vein of LadyHawke with a healthy dose of Miyazaki that was two decades in the making.
The captain of the Royal Guard has fled the capital city with the Queen of Maar, suffering under the effects of an evil spell. Captain Rook's only hope of returning Queen Olwyn to her throne and saving the kingdom from impending war lies on an island half a world away-a place known in myth as Isola, land of the dead, in the absolutely stunning, ISOLA #1.


Where in the world is Tim Drake?
BATMAN DETECTIVE TP VOL 05 LONELY PLACE OF LIVING REBIRTH.

Under the protection of the Black Panther, the African nation of Wakanda has thrived. But after attending a secret meeting, T’Challa returns home with severe injuries. What happened in that meeting? And what does it mean for the people of Wakanda and is it time for his sister, Shuri to shine?
BLACK PANTHER SHURI DEADLIEST OF SPECIES TP NEW PTG.

This stunning hardcover book showcases the art of the renowned Spanish artist Esteban Maroto in a science-fiction space opera from the 80s.
PRISON SHIP HC.

The specter of the devastating weapon known as the Death Star brought together a patchwork cloth of people, united in hope. And now these rebels continue to fight for a better tomorrow for a galaxy far, far away re-visiting a setting from Rogue One.
STAR WARS TP VOL 07 ASHES OF JEDHA.

In the lead up to Avengers Infinity War, take a moment to revisit the Mad Titan, Thanos from the king of Marvel space Jim Stalin in
THANOS INFINITY SIBLINGS OGN HC.

Ever wanted to learn about the X-Men but not sure where to start? Ed Piskor of Hip Hop Family Tree fame teaches you all you need to know to get you up to speed in the hit series that had everyone talking,
X-MEN GRAND DESIGN TP.


Wedding plans are in full swing for Batman and Catwoman in
BATMAN #44.

The ultimate showdown between Batman and Deathstroke starts here in this 6 part story
DEATHSTROKE #30.

The Crimson Tower is awake with warriors from distant lands are drawn to its gate, in the Barbarian masterpiece,
HEAD LOPPER TP VOL 02 CRIMSON TOWER.

The responsibility of making sure someone gets there daily paper is upped somewhat when the future can only be saved by time traveling 12 year old paper delivery girls in the latest,
PAPER GIRLS TP VOL 04.

With a matriarchal force running the town of Redlands, Florida, sacrifices must be made as dark secret is unleashed in book about witches like no other,
REDLANDS TP VOL 01.

So plenty to make it worthwhile to drop in this week to check out. If you spot something else you need, just be sure to let us know before Tuesday night and we'll get you sorted.
Until the next time we see you, enjoy what is left of those chocolate eggs and have a great week.

BACK IN STOCK
AMAZING SPIDER-MAN #797 2ND PTG ROSS VAR LEG
Posted by All Star Comics Team at 8:43 AM