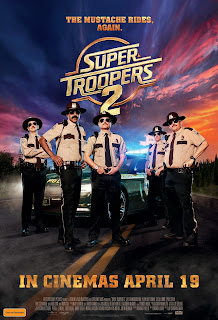 Everyone's favorite law enforcement team is back by popular demand with the long anticipated follow up to the cult comedy classic...SUPER TROOPERS. When an international border dispute arises between the U.S. and Canada, the Super Troopers-Mac, Thorny, Foster, Rabbit and Farva, are called in to set up a new Highway Patrol station in the disputed area. Unconventional police work follows, and the result is...SUPER TROOPERS 2.

Thanks to those law abiding folks from TWENTIETH CENTURY FOX and
SUPER TROOPERS 2 in cinemas April 19th, we have 5 prize packs to give away
that each include a t-shirt, moustache and a DVD of the original film.

To go into the draw for your chance to win all you need to do is tell us,
"If you haven't seen the original Super Troopers ______, meow is your chance" filling the blank with the tag of the person who really should of seen this film by meow and you will be entered in the draw.

Terms and Conditions:
-Only entries made via the comments on the Facebook post will be included in the draw.
-All entries will go into the All Star Barrel and winners will be drawn at random.
-Entries close 5pm Sunday the 22nd of April and winners will be announced Monday the 23rd and notified soon after as to how to collect their prizes.