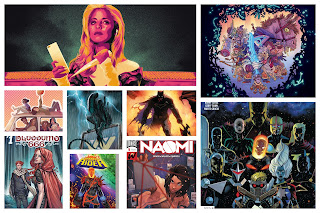 Yes, yes, yes. Step right up! Not the biggest shipment of the year YET it is full of some excellent new reads! That AND the All Star Comics Women's Comic Book Club meet up this Sunday, it's a winner week right here in store, just look below and see!

With Marvel's 80th Anniversary upon us, Marvel are digging up some classic titles for their new creators to play with. But maybe not all of them should have been uncovered, as Al Ewing and co. will show you in CRYPT OF SHADOWS #1. Something horrific has broken out of the dark depths of the Marvel Universe, and its terror is spreading across the Earth. Make sure you're properly prepared for this one, or you might need to sleep with the lights on afterwards...

Another book to celebrate Marvel's past arrives with the very different WAR IS HELL #1, a superhero-free book set during World War II and modern day Afghanistan. Howard Chaykin takes you to a battle in the sky over the English Channel between the RAF and Luftwaffe, whilst Phillip Johnson takes you to a conflict that still ensues today. Both will chill you to the bone, and remind you why war is pointless.

Donny Cates and Geoff Shaw, the duo who brought you Thanos Wins, return to bring a new lease of life to Marvel's cosmic team with GUARDIANS OF THE GALAXY #1. In the aftermath of Infinity Wars, Groot, Moondragon, Nova, Silver Surfer, Cosmic Ghost Rider, Adam Warlock, Beta Ray Bill, Phyla-Vell, Guardian, Darkhawk and Star Lord come together to defend the galaxy, but by the end, only six will stay on. Amongst these eleven heroes, which six are truly worthy of the title: Guardian of the Galaxy?

First, he was Frank Castle, the Punisher you know and love(?), until a deal with the devil made him the Ghost Rider. But a later deal with Galactus made him cosmic, and another deal with Thanos made him dead! But no-one can keep a good Cosmic Ghost Rider down, and so here is COSMIC GHOST RIDER TP BABY THANOS MUST DIE, another Donny Cates hit with art from Dylan Burnett. Castle is setting out to make the universe a better place and nothing, not Galactus, the Guardians of the Galaxy, or even baby Thanos, will get in his way.

Following ten weeks of uncanny goodness, don't let the exciting times come to a halt just yet, for you can't go past a copy of UNCANNY X-MEN ANNUAL #1, from Ed Brisson and Carlos Gomez. Cyclops takes centre stage in this one, so if you're a die-hard Scott Summers fan, this could just be your book of the year.

A fight between Superman and Mongul is the catalyst that launches the latest book in Brian Michael Bendis' Wonder Comics line: NAOMI #1. After the two duke it out, a young observer, Naomi, will go on a quest to find out who the last super-powered being to visit her neighbourhood was, and how that may tie in to her origins and adoption. It's the epic beginning to a journey that will take Naomi to the farthest corners of the DC Universe, and this is your invitation to join her.

For you fans of Giant Days and Check, Please, this is the new book for you: AVANT-GUARDS #1 (OF 12)! From Heavy Vinyl writer, Carly Usdin and artist Noah Hayes, comes the story of basketballer and aspiring actor, Liv and her arrival at Georgia O'Keefe College of Arts and Subtle Dramatics, a school that favours a drama geek over a jock. She feels alone, until another basketball-playing student, Charlie, arrives. Maybe Liv will be able to find her place in college after all.

Get yourself reacquainted with the world's favourite vampire slayer with BUFFY THE VAMPIRE SLAYER #1, from Jordie Bellaire and Dan Mora. Starting back at Sunnydale High, Buffy Summers is your typical teen, with friends, good grades and trying to avoid her destiny to become a slayer but things aren't exactly how we knew them before. History has been slightly tweaked and updated and there is bound to be a few surprises on this revisiting!If you're a longtime fan, or never even heard of Buffy before, this book caters for all.

Amanda Ripley, daughter of the legendary Ellen Ripley and star of the Alien: Isolation video game, returns in ALIENS RESISTANCE #1, from Brian Wood and Robert Carey. Amanda is being kept silent by the Weyland-Yutani Corporation about a threat regarding xenomorphs. But when she meets ex-Colonial Marine, Zula Hendricks, who is trying to reveal an illegal bio-weapons program, the pair will unite to expose these dark secrets to an unsuspecting public.

Charles Dickens' literary classic gets a futuristic upgrade, courtesy of Gary Whitta and Darick Robertson, with OLIVER #1. With the world ravaged by war, Oliver Twist is now a post-apocalyptic superhero trying to liberate his home country of England, whilst also trying to piece together the mystery of his own origins.

Teased in Marvel Legacy, Ta-Nehisi Coates takes King T'Challa out from the nation under his feet and throws him across the Multiverse in BLACK PANTHER TP BOOK 06 INTERG EMPIRE WAKANDA PT 01. An intergalactic empire has been built in his name, but when he awakes within it, the king can only remember a hard life, toiling in the Vibranium Mines. Where has the Black Panther gone?

The most rocking DC comic book event ever finally comes to paperback with Scott Snyder and Greg Capullo's DARK NIGHTS METAL TP. Collecting the six-issue miniseries, Batman and the Justice League will take on Barbatos and his Dark Knights, whilst preventing their own world from sinking into the terrors of the Dark Multiverse.

For years, the original X-Men from the past have fought in the present day for the future of their world, but now to save the future, they must return from whence they came in EXTERMINATION TP. The mutant hunter Ahab is after the heads of the young Angel, Jean Grey, Cyclops, Beast and Iceman, and if even one of them is claimed, then time will be destroyed. How many mutant lives will be exterminated to save these original five?

The Main Man is back, screeching on his space bike and hauling in the bounties with his chain in LOBO BY KEITH GIFFEN & ALAN GRANT TP VOL 02. Lobo will face down his illegitimate children, fight the galactic taxman as well as do his duty with Authority and serve his galaxy. Will anything he do actually help the universe, or will it need some time to recover before another volume can be released?

Chip Zdarksy returns to bring you another volume starring half the Fantastic Four with MARVEL TWO-IN-ONE TP VOL 02 NEXT OF KIN. Ben Grimm and Johnny Storm continue their mission to find their missing family, coming across all sorts of foes along the way, including their old enemy in a new set of armor, Dr. Doom as the Infamous Iron Man. But it isn't long before Reed and Sue are found, but something doesn't appear to be quite right... oh well, guess it's another day in the life for the famous quartet.

Cheryl and Jason Blossom are iconic Riverdale residents in this new series
BLOSSOMS 666 #1 we find out which one of the twins is the anti-Christ? They both want the title, who will win? (Probably Cheryl, right?)

The classic horror mag is back and it's better and bloodier than ever, FANGORIA VOL 2 #2.

If you are in the mood for a tear jerker we have the manga for you! I WANT TO EAT YOUR PANCREAS GN tells the story of Yamauchi Sakura a high school student who is dying of from a pancreatic disease and has been suffering alone until another student finds her diary and learns her secret, the two become close and spend Sakura's last few months together.

A tale of love as Xavier, a 48-year old writer sets out to restart is life after a midlife crisis in NEW LIFE GN.

These four comic adaptations have something for everyone and are a must for Gaiman fans! PROBLEM OF SUSAN AND OTHER STORIES HC.

Adventurer Mikura Amelia tracked down the illusive drifting Electric Island but once she found it her GPS gave out and now is stranded, what secrets does the island hold and where is it heading? WANDERING ISLAND TP VOL 02.

So there it is, if you've spotted something else you need us to stash from this list just be sure to let us know before close on Tuesday to get it sorted for you.
Until we see you next, live life and read comics!

Posted by All Star Comics Team at 4:32 PM