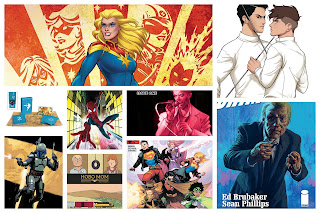 2019 ain't messing around. Only the second shipment of the year and we are seeing some massive releases! Just look at this list!

With Charles Soule's run over, and a while still before Chip Zdarsky's begins, fill the chasm in between with MAN WITHOUT FEAR #1 and MAN WITHOUT FEAR #2. The first two issues of a five part series from Jed MacKay which examines what's going on in Hell's Kitchen following the apparent death of its' guardian, Daredevil. In these issues, see how Foggy Nelson is coping without his friend and law firm partner in the first, whilst the Defenders continue to fight for the people of Hell's Kitchen without their fallen ally.

Having spent months in space, protecting the Earth on a space station with Alpha Flight, Carol Danvers returns to New York City with CAPTAIN MARVEL #1. The beginning of what will be a fantastic new series from Kelly Thompson and Carmen Carnero, and just in time for Cap's onscreen debut. Thankful to be back on and down on the ground, Captain Marvel won't get long to rest just as the unexpected rears its ugly head.

Local scribe, Tom Taylor, and rising star artist, Juan Cabal, start a brand new series featuring Marvel's flagship character with FRIENDLY NEIGHBORHOOD SPIDER-MAN #1. With comics always needing to pit our heroes against the most impossible of odds, this new book will instead take things a little easier, giving you an insight into Spider-Man and what it is that makes him a friendly, neigbourhood hero.

Another Star Wars character gets a day in the spotlight thanks to the efforts of Jody Houser and Luke Ross in STAR WARS AOR JANGO FETT #1. He's the feared bounty hunter who keeps calm under pressure, and only loses his head when it's forcibly cleaved from his shoulders. Now he's on a new job, but who's this kid with him? Who else could it be, but his son, Boba Fett! Let's hope those fellow bounty hunters of his don't think Fett's gone soft as a father, and try to betray him.

Another Web of Venom one-shot hits the shelves with WEB OF VENOM UNLEASHED #1, written by... wait a minute, Ryan Stegman? That's right folks, Venom's ongoing artist is taking over writing duties for this one, as we track the symbiote's journey through Eddie Brock's old haunts in San Francisco.

2019 sees Brian Michael Bendis' creative hot streak at DC continue with YOUNG JUSTICE #1, the first in the new line of Wonder Comics! BMB and artist Patrick Gleason reunite and inject new life into the old team, reuniting Robin, Wonder Girl, Impulse, Amethyst and the missing Superboy together, whilst throwing a new character, Jinny Hex, into the mix. When Gemworld invades Metropolis, the young heroes will have to defend their home... and find Conner Kent returned to them at last in this DC Rebirth era.

Spinning out of the popular Tom Clancy's The Division 2 video game comes TOM CLANCYS DIVISION EXTREMIS MALIS #1. After an attack devastated New York City, the Division were formed to protect the United States from any such potentially devastating threats in the future. In this story, the partner of Agent Caleb Dunne is murdered, and he will have to go down a slippery path of mystery and intrigue to reach the truth.

With Kill or Be Killed complete and My Heroes Have Always Been Junkies in stores around the world, the acclaimed creative team of Ed Brubaker and Sean Phillips finally return to their most successful creation with CRIMINAL #1. In this special, double-sized issue, Teeg Lawless is back in town, and his teenage son is getting him back into more trouble. Trouble that may require more than just his fists and brawn. The perfect issue for true crime fans and those looking to jump into the rich world.

A different kind of comic book from Image debuts this week with GUNNING FOR HITS #1, telling the story of Martin Mills, a member of the shady NYC music business in the 80s. He's out trying to sign a hit rock band to his label, and will do all the dirty work he has to to achieve it in this business crime thriller written by real life music producer Jeff Rougvie and illustrated by artist Moritat.

C. S. Pacat's overwhelmingly successful sporting drama series continues with FENCE TP VOL 02, with tryouts for a place in the prestigious Kings Row fencing team underway. Nicholas, despite being the underdog, is fighting for his spot, but he'll have to compete against his surly roommate, Seiji Katayama, amongst others, to prove himself worthy of it.

Laura Kinney moves past her time as Wolverine and returns to her roots as X-23 in X-23 TP VOL 01 FAMILY ALBUM, from Mariko Tamaki and Juan Cabal, to ensure that no-one else ever need suffer the way she did. With her sister Gabby and pet wolverine, Jonathan, by her side, she'll undergo all sorts of odds, from fighting former allies to posing undercover in a school, to make sure she completes her personal mission.


In the final days of the Indian Wars, a new hero rises in TUROK #1, from comics veteran Ron Marz . Pursuing his kidnapped brother, Turok find himself in a new land, strange land, along with the US Cavalry soldier he was hunting. With strange creatures beyond their imaginations inhabiting this undiscovered country, Turok will need to rise above the odds to keep everyone alive, friend and foe.

With the last issue sold out, you better make sure that your reservation is in for SELF MADE #2, from Sydney writer Mat Groom, who kindly came into the store not long ago to do a signing of #1, and artist Eduardo Ferigato. With Amala's true nature revealed, it's up to her creator to find a way to discover why her genesis occurred, before she is lost forever.

That's right, folks, we did indeed sell out of all our copies of the exciting first issue of Self Made. But if that preview for issue 2 was too tantalising, too intriguing that you just have to pick it up, but you haven't had a chance to get issue 1, then you are in luck! This week brings us a restock of SELF MADE #1, which begins the journey of Amala and her confrontation with her God.

After decades on the comic page and the small screen, Aquaman finally received his own solo film last year, and your chance to get an in-depth look at the translation from script to screen arrives with ART AND MAKING OF AQUAMAN HC. Packed to the brim with interviews, concept art, behind the scenes photos and more, watch how the expanses of Aquaman's aquatic kingdom and homeland were brought to life through the magic of cinema!

Charles Forsman and Max de Radigues meld their unique, artistic talents from across the Atlantic to bring you HOBO MOM HC, a somber, intimate story depicting a broken family trying to repair their emotional bond and the price of freedom. Natasha was a wife to Tom and a mother to newborn Sissy, but she abandoned them both to live the life of a vagrant for many years. But now she's returned home, to a husband that's upset, yet still in love with her and a daughter yearning for a mother. Can the family reunite, or has it been too long for bridges to be mended?

With the standard copy of Creating a Champion already making a huge splash, those of you who waited a little longer for something more deluxe will find yourselves rewarded with LEGEND OF ZELDA BREATH WILD CREATING A CHAMPION HC HERO ED! Featuring everything in the initial release, along with a Spirit Orb replica, a cloth map of Hyrule, a photo of all the Champions and an exclusive cover and collectible slipcase, this is the perfect book for the most die-hard of Legend of Zelda fans.

Mitch Clem's acclaimed web comic that analyzed punk culture and music with witty, lighthearted satire is completely collected in NOTHING NICE TO SAY GN. Running form 2002 to 2014, Clem and his comic built up a dedicated fanbase, which turned it into one of the most popular web comics ever made, and now it's your to own, on printed paper.

With a martial arts tournament complete and the Monster Association dealt with once again, Saitama still feels unfulfilled in ONE PUNCH MAN GN VOL 15, from One and Yusuke Murata. His strength, his ability to wipe out any of his foes with a single punch, it's hard to find much to challenge yourself with. Can King talk Saitama into finding new purpose by living like a hero?

The creator of many of sci-fi's greatest and most influential works, such as Do Androids Dream of Electric Sheep and Total Recall, the life of Philip K Dick was just as fantastic as what he wrote. His works spoke of his mindset towards the political climate, social tendencies and religious ideals, and you can learn about the life that inspired them in PHILIP K DICK A COMICS BIOGRAPHY HC. From five wives and a pittance for his masterpiece works to drugs that hindered rather than helped him, every little detail you wanted to know, and some you probably didn't can be found here.

As long as there's been swing, bebop, blues, jazz, soul and so many more kinds of music in African American culture, there has been... the Apollo! Constructed in 1934, the Apollo has been the home of and has nurtured many of the century's talented musicians, and its rich history is researched and presented to you in SHOWTIME AT APOLLO EPIC TALE HARLEMS LEGENDARY THE, from Ted Fox and James Smith.

Ever had a creative urge to tell a story, but feel you're lacking a resource to guide you? Never fear, STOLEN SHARPIE REVOLUTION SC DIY RESOURCE FOR ZINE is here. This little volume from Alex Wrekk will take you through what you need to know to create you own little zine, and the impact of zines on pop culture. For you budding creators out there, you won't want to let this one slips through your fingers.

Treat the child in you and spoil them too with BATMAN ANIMATED BATMAN 1/6 SCALE COLLECTIBLE FIGUR. An institution in not just superhero animation, but all ages television, Batman: The Animated Series was a landmark work, and now you can own a scaled figure of Batman himself, from Mondo. With 30 points of articulation, different heads and more gadgets than you can throw a batarang at, this is the perfect thing to spend you Christmas money on!

Oh what a wonderful selection! If you spot something you need us to stash, just let us know before close Tuesday night. Until we see you next, live life and read comics!