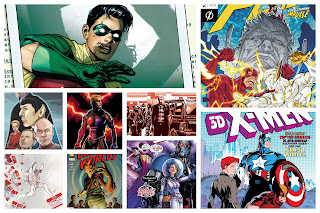 Ummm, yeah so it's the last week of Jan already. Seriously what the hell 2019! At least you've got plenty of great reads for us!

The biggest X-Men event in years begins with Zac Thompson and Ramon Rosanas' AGE OF X-MAN ALPHA #1. The Age of the X-Man dawns, and the X-Men are powerless to prevent it, causing a massive shift in what was a familiar world. Will Marvel's mightiest mutants be able to put things back as they once were, or are they doomed to live in this unnatural new era?

Cullen Bunn and Clay McLeod deliver two different tales of sci-fi and horror in JOURNEY INTO UNKNOWN WORLDS #1, another book designed to celebrate 80 years of Marveldom. Bunn's extraterrestrial story is far-reaching and unlike anything you've seen before, whilst McLeod's tale of terror will be so scary, it will make you wish you hadn't seen it all.

Step back into the past with UNCANNY X-MEN 3D #1, a special reprinting of Uncanny X-Men #268. It's still written by the master of comic book soliloquy, Chris Claremont, and the then-rising hot shot, Jim Lee, but now it's in 3D! Polybagged with a pair of 3D glasses, witness Wolverine's past with Cap and Black Widow like never before.

Joshua Williamson and Scott Kolins present a Heroes in Crisis tie-in with FLASH ANNUAL #2, where Barry is beleaguered by the loss of Wally West in the ravaging of the Sanctuary. Keeping that information quiet from the rest of the Flash family, he searches all across the Earth and the Speed Force for any hope of Wally's survival. But his hunt inadvertently unleashes Godspeed back into the world, and Barry's former friend is after the head of Kid Flash...

The conspiracy against the superheroes deepens with HEROES IN CRISIS #5 (OF 9) from Tom King and Clay Mann. The Sanctuary session recordings, supposedly deleted after each one is over, have been leaked across the globe, so who is responsible for compromising the Sanctuary? Is the same person that Harley Quinn and Booster Gold are looking for, the one who murdered unwell heroes and villains alike? You better pick this one up to find out.

Annual season at DC Comics continues with JUSTICE LEAGUE ANNUAL #1 from Scott Snyder and James Tynion IV. The degradation of the Source Wall has reached its critical point, and the Justice League must repair the hole or the Multiverse will collapse. Their only hope lies with the villains of No Justice, the Omega Titans!

You can find love in the strangest of places, and they don't come much stranger than the cosmos that is the DC Universe. Check out MYSTERIES OF LOVE IN SPACE #1, where you'll find eight tales of heartwrenching and heartwarming romance, starring Superman, the New Gods, Green Lantern, Starro, Hawkgirl and even the Teen Titans. There's a story for everyone here.

After the success of Fight Club 2, Chuck Palahniuk and Cameron Stewart reunite to bring you a new, 12-part maxiseries with FIGHT CLUB 3 #1. Marla Singer and her husband, the unnamed narrator (now going by Balthazar), are expecting their second child. But Balthazar isn't the father, his rival Tyler Durden is.

There are phenomena and events that are too weird, too strange for the US Government to solve, so when they're in a crisis, they turn to: Pitor Wyrd. In WYRD #1, Wyrd travels to Crimea, to investigate a monster, the result of a failure in a US Super Soldier program, roaming the wilds, with corpses lining its traveled path.

The Thunderbolt is a perfect hero, one that a struggling humanity sorely needs, but unfortunately for them, Thunderbolt is happy to leave them to their self-destruction. Keiron Gillen and Caspar Wijngaard begin the story that is much a homage to comics, as well as a deconstruction of the hero's story with PETER CANNON THUNDERBOLT #1.

The biggest Star Trek event in the entirety of the franchise's history begins with STAR TREK Q CONFLICT #1 (OF 6), from Scott and David Tipton and David Messine. A dispute amongst the legendary and godlike Q beings threaten the galaxy, and it will take the combined strength of captains James T. Kirk, Jean-Luc Picard, Benjamin Sisko and Kathryn Janeway, along with their loyal crews and starships, to put the conflict to ease and restore the peace.

In the 1980s, the citizens of Seattle, Washington were living their lives in terror of the infamous Green River Killer. Capturing him was the highest priority of the police, but at the beginning of 1990, the case was palmed off to solo detective Tom Jensen. 20 years later, with the help of DNA profiling, Jensen got his man, and that gripping true crime journey is brought to you with GREEN RIVER KILLER HC TRUE DETECTIVE STORY 2ND EDITION, from Jeff Jensen and Jonathan Case.

Shane-Michael Vidaurri makes his first foray into the art of graphic novels with IRON OR THE WAR AFTER GN, featuring a story of human conflict through anthropomorphic animals in the same vein as Maus and Animal Farm. Hardin, a rabbit with the Resistance, steals secret information from the monstrous Regime, turning a cold war burning hot and affecting everyone from top military officials to small, orphaned children.

A revolutionary figure in the music scene during the social upheavals of the 60s and beyond, James Brown has lived an amazing life, and Xavier Fauthoux has provided a definitive look at it with  JAMES BROWN BLACK AND PROUD HC. Watch as Brown, along with his fellow musicians, spread funk and soul throughout the country amidst the backdrop of Civil Rights reforms of America.

Gabriel Rodriguez, co-creator of the acclaimed Locke & Key series, presents his latest story, which blurs the line between magic and science with SWORD OF AGES HC. The young warrior, Avalon, has become the first to ever wield a famous and sacred weapon of legend, and she'll need it inspire other heroes to join her and rally against an alien force.

The annuals keep coming, continuing with TEEN TITANS ANNUAL #1 from Adam Glass and Ryan Benjamin. Damian is caught in a personal struggle after being betrayed by the Red Hood, and now Robin wants revenge. Amidst all this, the rest of the Teen Titans combat their new foe, Joy Stick, and Djinn also tries to keep a personal secret hidden from her team.

Brian Froud, the visionary designer behind Jim Henson's seminal film, the Dark Crystal, presents a volume of insight into the world of Faeries with BRIAN FROUDS WORLD OF FAERIE HC REVISED & EXPANDED. Considered to be his personal magnum opus, Froud presents drawings, paintings and watercolours never before seen by the public, all of which greatly expands upon his original works.

After his popularity fizzled in the mid 90s, but before Garth Ennis and Steve Dillon restored him to great heights, Frank Castle found himself in limbo... literally. The Punisher was dead, but Heaven wasn't ready to open its gates, making him an angel of divine vengeance in MARVEL KNIGHTS PUNISHER TP PURGATORY. Featuring artwork from the master of horror comics, Bernie Wrightson, maybe this original narrative misfire may discover a new following in a new decade.

Prepare yourself to witness the most rocking, kick ass team of heroes ever assembled in NEW LIEUTENANTS OF METAL TP, from Joe Casey and Ulises Farinas. The names of its members, the Mighty Krieg, Vandenborg Riot, Manowarrior and Steppenwulf, are legendary and the four are ready to take down all their foes in awesome style.

Gustave Flaubert's 19th novel has new life breathed into it by Philippe Druillet with SALAMMBO HC. Transposing the original setting from the Punic Wars of the third century BC to a space fantasy of Druillet's own creation, the ancient conflict between one culture exploiting the work of another takes on a new, psychedelic dimension.

Charles Soule's epic Darth Vader series reaches its climax with STAR WARS DARTH VADER DARK LORD SITH TP VOL 04 FOR. Learn the dark origin of Darth Vader's castle fortress, glimpsed in Rogue One, and how it came to be built at the site of Vader's greatest failing: the molten planet Mustafar. Built by the dark powers of the Sith, the planet's citizens won't take this lying down, something the Dark Lord of the Sith is bound to make them regret.

For you fans of Transformers figurines, especially those of you who live the packaging artwork, comes TRANSFORMERS PACKAGE ART PORTFOLIO. Featuring ten lithographic prints showcasing some of the very best of the original Transformer toy packaging.

After being without for so long, at long last, we finally have the highly sought after, highly adorable card game back in stock! Based of the incredible book from Kate O'Neill, create your own bond with a dragon with the TEA DRAGON SOCIETY CARD GAME. A great game for families and friends alike, and adorable to boot.

So that just some of this week's books, see something extra you like, just let us know before Tuesday close and we'll get it sorted for you! Until the next time we see you have a great week, live life and read comics!