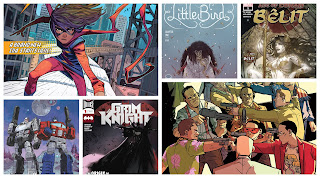 Most of us are still livin large with a long weekend, let take a second to look at this week's newest releases to keep the party going!

DING! DING! DING!
Ladies and gentlemen, you are about to witness the most epic showdown between comic book stores the world has ever known!
The fight is between your favourite local store, All Star Comics, and our Chicago analogue: Challengers Comics.
To settle the score, to prove which is truly mighty, Darcy Van Poelgeest and Ian Bertram's LITTLE BIRD #1 (OF 5) is the book to buy, as each store tries to sell the  most copies.
So if you want us to be worthy of the name All Star, you have to pick this one up, especially if you loved Saga and East of West.

With the Final Host finally defeated, the Avengers can get back to doing what they do best in AVENGERS BY JASON AARON TP VOL 02 WORLD TOUR: saving the world. But now that the Avengers operate independently, the USA and Russia are looking for new heroes to represent their interests, which look to put the Avengers back on ice. Amongst all this, see Namor's rise to warlord of the sea, and learn a little more about the Avengers of 1,000,000 BC.


Marvel's World of Conan gets that much bigger when Belit, the She-Devil of the Sea, gets her own miniseries, beginning with AGE OF CONAN BELIT #1 (OF 5), from Tini Howard and Kate Niemczyk. In this new series, you'll witness Belit's rise to become the undisputed Queen of the Black Coast and one of Conan's most powerful allies.

The Age of X-Man may be a utopia for mutants, but it's one that is devoid of love. But now, a new hero rises to right that wrong in AGE OF X-MAN APOCALYPSE AND X-TRACTS #1 (OF 5), from Tim Seeley and Salva Espin. That hero is... En Sabah Nur, the man they once called Apocalypse! Wow, bet no-one saw that one coming. How will a mutant who destroys find a way to create love?

Kamala Khan returns to comics with brand new issue, MAGNIFICENT MS MARVEL #1, featuring a brand new team, Eisner award-winning writer Saladin Ahmed and rising star artist Minkyu Jung, and brand new adventures in Jersey City. In her return, Ms. Marvel will have to combat against aliens that seem abnormally interested in not just her, but her family as well.

The Clone Wars continue to rage, and one of it's significant figures, the dreaded General Grievous is poised to strike in Jody Houser and Luke Ross' STAR WARS AOR GENERAL GRIEVOUS #1. Still on his hunt to kill as many Jedi as he can, Grievous gains access to a Jedi Temple, where the greatest and most deadly blow may be struck.

The future collides with the present in Sina Grace and Nathan Stockman's UNCANNY X-MEN WINTERS END #1, as Iceman and the X-Men receive a special visitor: Bobby Drake from the future! But what has happened in the years in between that make future Bobby tell present Bobby to give up the superhero life?

The Batman Who Laughs returned to the prime DC Earth with the help of a new Batman from the Dark Multiverse, but who is this dangerous Bruce Wayne? Scott Snyder and Eduardo Risso give you the backstory into the Batman known as the Grim Knight in BATMAN WHO LAUGHS THE GRIM KNIGHT #1, and it's going to be bloody.

In a world overrun with monsters, ghouls, zombies and more supernatural evils, a more pragmatic hero is required, so Magdalene Visaggio and Corin Howell provide one in CALAMITY KATE #1. Kate Strand, going by her superhero name Calamity Kate and packing some serious heat, is ready to take down as many monsters as she can, and make a nice profit along the way.

2018 bid the original IDW Transformers universe farewell, but 2019 sees a new universe rebuilt from the ashes with TRANSFORMERS #1, from Brian Ruckley and Angel Hernandez. This first issue takes you back to where the action all begins, the planet Cybertron, where Optimus Prime and Megatron clash to bring about their version of a perfect world for all.

When you take the two time Einser award-winning artist of the Unbeatable Squirrel Girl, Erica Henderson, and team her up with Rick & Morty comic writer, Kyle Sparks, you get the violent hilarity you can only find in ASSASSIN NATION #1. The man who was once the World's Greatest Hitman has the biggest target painted on his back, so he hires twenty of the best killers in the world to protect him and track down those looking to take him out. But if too many chefs spoil a broth, what happens if you hire too many murderous bodyguards?

It's common knowledge that Damian Wayne is the son of Batman... right? Christopher Priest challenges that when Batman finds a package with DNA results pointing to Deathstroke as the true progenitor of Damian in BATMAN VS DEATHSTROKE HC. To discover the truth, and find the person muddying the waters, it will take a clash between the World's Greatest Detective and the World's Deadliest Assassin.

From the Eisner award-winning writer of Giant Days, John Allison, comes BY NIGHT TP VOL 01, a story about finding your way home and your identity, featuring artwork from Christine Larsen. Jane is an aspiring documentary film maker, a chemistry major and cautious, while her best friend Heather is an urban explorer and will take any risk. Together, after exploring an abandoned industrial site, they find a portal to a new world. Will they dare to step inside and find a new lease on life? Or stay in the dull, boring real world?

After the events of Onslaught and Heroes Reborn, the Fantastic Four return to the regular Marvel universe in FANTASTIC FOUR COMPLETE COLLECTION TP VOL 01 HEROES RETURN, with acclaimed creators such as Chris Claremont, Scott Lobdell, Alan Davis and Salvador Larroca taking the helm. It's good timing too, because they can't leave a single foe unchecked, including Mole Man, the Frightful Four, Terminus and many more, in these action packed issues.

When Morty gets a crush on a cute girl who plays Dungeons & Dragons, he'll make the mistake of asking his grandfather, Rick to teach him the rules and strategies. As it happens, Rick is a gaming veteran, and he's gonna take Morty and the family on a hellish adventure to worlds which run on the rules of D&D in RICK AND MORTY VS DUNGEONS & DRAGONS TP, from New York Times  #1 best-selling author Patrick Rothfuss, comic veteran Jim Zub and artist Troy Little.


A new era for the Goon begins with creator Eric Powell's GOON #1, which also marks Goon's return to his real home, Albatross Funnybooks. To begin celebrating the 20th anniversary of the character, Powell brings the book back to its original humourous roots, as Goon and Franky go out in new, strange adventures.

The transformation sequences of Sailor Moon along with the violence of Kick Ass are combined into one package with MAGICAL BEATDOWN #1, from Jenn Woodall. A seemingly average girl has the ability to transform into a foul-mouthed, blood knight of a Magical Girl, and she's ready to take down any street criminal that gets in her way with her arsenal of magical weapons.

While others have brought his Game of Thrones epic to the TV screen, George RR Martin himself has penned scripts for potential television shows. Most go dismissed, but Raya Golden has dug up one where Law & Order meets the Men in Black to bring us GEORGE RR MARTIN STARPORT GN. Depicting what happens when Earth accepts a deal from a group of 314 alien species to make humanity number 315 in their collective, it narrows down on a starport in Chicago, and those who protect the streets.

IDW repeats the success of their Transformers Art Packing Portfolio release by getting the famous packaging artworks of the GI Joe figure range displayed in a single volume: GI JOE PORTFOLIO. Relive the glory days of your past, as the epic artworks that wowed a generation of kids into collecting every figure they could.

The lives of Julie, the werewolf barista, and all her supernatural friends continue in Grace Ellis and Shae Beagle's MOONSTRUCK TP VOL 02. In this volume, they're trying to unwind at a party, but some fairy bros have other plans in mind, but with the winter solstice looming, Julie has no time for mischief.

For fans of either Hayao Miyazaki or Raina Telegmeiger comes NIGHTLIGHTS HC GN VOL 02 HICOTEA, from Lorena Alvarez. Our hero, Sandy, loves to explore, and her latest adventure comes about after she wanders away from a school field trip to inspect an empty turtle shell. Little does she know that this shell is a gateway to a magical realm, and its inhabitant will need her help.

The second arc of Robert Kirkman and Lorenzo De Felici's acclaimed new series is collected in its entirety in OBLIVION SONG BY KIRKMAN & DE FELICI TP VOL 02. Nathan Cole is caught up in the affairs of two worlds, and it'll be up to him to forge ahead for both their sakes.

When an unknown woman flying at speeds of 120 mph dies in a fiery explosion mid-flight, teenage Luna becomes obsessed with learning all about this mysterious Flying Woman. Taking the first steps into her investigation in Fausto Vitaliano and Claudio Sciarrone's SHE COULD FLY TP, will this help Luna bring peace into her life?

Troy Nixey's quirky tale of a boy named Trout and his clash with an evil puppeteer and his puppet show is reprinted in TROUT HC VOL 01 BITS & BOBS. Trout isn't like most other kids, he's been on weird adventures, and encountered more unusual phenomena than most people, adults and kids combined. So when a mysterious puppet show comes to town, it's up to Trout to defend his neighbours.

Greg and Meg Smallwood bring to you the latest in Archie's horror comic series, VAMPIRONICA TP VOL 01, which sees one of Riverdale's most popular high schoolers with a thirst for blood. Veronica the vampire is a force to be reckoned with, her bloodlust ready to turn her hometown into a vampiric haven.

Based off the designs of Ant Lucia, the latest statue from DC, the DC COMICS BOMBSHELLS BIG BARDA STATUE, depicts a rough, rollerblading Big Barda from DC Bombshells and she's ready to crush the competition. So if you pick this statue up, you'd better make sure she's the centrepiece of your display.

Yes! A shorter working week but a massive shipment filled with excellent items. Need something here, just let us know before close Tuesday night and we'll get it sorted.
Until we see you next have an awesome 4 day week, live life and read comics!

Posted by All Star Comics Team at 2:58 PM