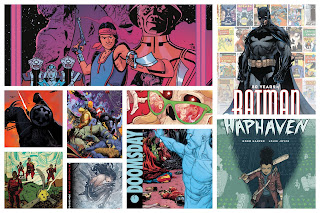 March on, March! Autumn heatwaves and excellent comics.
Remember comics are cool and this week shipment looks like delivers that in a big way!

The Age of X-Man expands further when we find out what happens to those who don't conform with mutantkind's standards in Vita Ayala and German Peralta's AGE OF X-MAN PRISONER X #1 (OF 5). The classic Danger Room takes on a new level of terror as it becomes a prison for the mutants who won't get in line with the others, and its latest guest is none other than Lucas Bishop.

Following his trip back to the past to kill a baby Thanos, Frank Castle, the Cosmic Ghost Rider, has sworn not to meddle with history while he remains stuck in time. But in Paul Scheer, Nick Giovannetti and Gerardo Sandoval's COSMIC GHOST RIDER DESTROYS MARVEL HISTORY #1 (OF 6), when Frank finds himself present during the birth of the Fantastic Four, he may just have to break his oath sooner than he imagined.

If you can't get enough of Gail Simone's Domino series, then you don't want to miss her new miniseries starring the luckiest mutant around: DOMINO HOTSHOTS #1 (OF 5). With her cohorts Diamondback and Outlaw, Domino gets caught up in a conflict between warring nations. A conflict that will require a team of super women to bring it to an end, with Domino leading the pack.

Robbie Thompson and Niko Henrichon invite you to meet what appears to be a regular, everday family from the Marvel Universe, the Warners in MEET THE SKRULLS #1 (OF 5). Mom and Dad go to work, and their daughters, Jennifer and Alice, attend high school, where life ticks by with nothing unusual happening in their days. Yep, they seem pretty normal... apart from being Skrulls intent on leading an invasion force, of course.

You all know Darth Vader, the heroic Jedi Knight who fell to the Dark Side and became a villainous Sith Lord. But when you lack the context of the films, when you're just another citizen living in the Galactic Empire, then you might see Vader in a different light, possible even a heroic one. That is the premise of STAR WARS VADER DARK VISIONS #1 (OF 5), from Dennis Hopeless that sets to examine the different ways the galaxy experience the symbol of the iconic Sith Lord.

The wait has been long, but no other comic is as worth the wait as Geoff Johns and Gary Frank's DOOMSDAY CLOCK #9 (OF 12). The DC Universe can't hide a secret from Doctor Manhattan, who finally emerges to pay this world of superheroes his due.

It's the face-off you never saw coming: the Green Arrow vs. the Black Canary in the finale, extra-sized, anniversary issue from Jackson Lanzing and Javi Fernandez: GREEN ARROW #50. Following the events of Dark Knights Metal, Oliver Queen was given a mysterious weapon from the Justice League, and government operatives have sent in Dinah Lance as Black Canary to find out what it is.

A new book from Greg Pak and Giannis Milinogiannis begins with RONIN ISLAND #1, following the rebuilding of society after the major cities of 19th century Japan, Korea and China are eradicated from the face of the Earth. Now the survivors gather on an island, where an enemy army invades, announcing the coming of a Shogun who requires fealty payments. Can the peoples of three feuding countries come together as one to repel this new threat?

Chen Andalou was always the black sheep of a family of activists, so they were happy to be rid of him and his criminal ways when he was accidentally cryogenically frozen. But 60 years later, Chen defrosts and returns in Jai Nitz and Tom Reilly's ASTRO HUSTLE #1. With his younger brother now the President of the Galaxy, Chen will have a harder time doing what he does best: galaxy-wide crime sprees.

Jeff Lemire teams with Matt Kindt for the next expansion of his Black Hammer universe with BLACK HAMMER 45 FROM WORLD OF BLACK HAMMER #1. Stepping back into the days of World War II, the Black Hammer Squadron was formed to fight the Axis powers, but the Germans have more than just artillery on their side. They have the powers of the occult to contend with as well.

"We can reboot him!"
That's right, folks, Steve Austin is back in his own comic book series, SIX MILLION DOLLAR MAN #1, from Christopher Hastings and David Hanh. It's the 1970s, and while the internet is two decades away, the time of the cyborg is now, but after years of operating, is the Six Million Dollar Man finally beginning to devalue with age?

With the final film of the How to Train Your Dragon released in cinema, celebrate the visual achievement with a look behind the scenes with ART OF HOW TRAIN YOUR DRAGON HIDDEN WORLD HC. Linda Sunshine is your guide through the development of the film, from concept to final designs with additional commentary from the creators, no fan of the trilogy can go past this one.

After far too long, Mr. Fantastic, the Invisible Woman, the Human Torch and the ever lovin', blue-eyed Thing reunite as only Marvel's First Family can in FANTASTIC FOUR TP VOL 01 FOUREVER, from Dan Slott and Sara Pichelli. After defeating the embodiment of Entropy, the Fantastic Four return to New York, only to find a new superteam has moved in on their turf. Who are the Fantastix?

The new Captain Marvel movie signals a new direction for the Marvel Cinematic Universe, and to get the inside scoop on the making of the film, you'll have to get yourself a copy of MARVELS CAPTAIN MARVEL HC ART OF MOVIE SLIPCASE. With concept art, interviews and more behind the scenes fun, make sure you have this one down on your order.

The latest escapades of one of Marvel's more unlikely, but universally popular heroes are collected in UNBEATABLE SQUIRREL GIRL TP VOL 10 LIFE TOO SHORTSQUIRREL, from Ryan North and Derek Charm. This volume has it all, the death of Squirrel Girl, a fighting-mad Iron Man, Skrulls... wait, hold up there! The death of Squirrel Girl? Say it isn't so! How will Doreen Green get out of this mess?

Warren Ellis and Jon Davis-Hunt continue their action adventure spy epic with WILD STORM TP VOL 03, with John Lynch on the road after his shady Thunderbook project is exposed. Now he must warn his test subjects, who are hiding from persecution, for they are no longer... human. Which begs the question: what have the subjects of Thunderbook become?

Legendary creator Frank Miller returns to his world of 300 with XERXES FALL HOUSE DARIUS RISE ALEXANDER HC, which has the champions of Persia and Greece combat each other in one final conflict. The Persian King Xerxes looks to avenge his father, Darius, and create the world's largest empire. But Alexander the Great, from Greece, stands in his way of achieving his goal.

Magneto, Mystique, Emma Frost, Juggernaut and Mojo. All have been foes of the X-Men, and now you can get a closer look at their villainous lives with the one-shot stories found in X-MEN BLACK TP. If you want to know what they're getting up to when they're not fighting Marvel's merry mutants, then you can't miss it, with legendary X-Men writer Chris Claremont penning a story.

Magdalene Visaggio and Claudia Aguirre take you back to 1983 with MORNING IN AMERICA #1, where the opening of a new factory in Tucker, Ohio seems linked to a spate of mysterious disappearances. But the disappearances fade into the background when monsters start attacking the town, and only a gang of delinquent teenaged girls can save them.

The cult hit sensation from Charles Soule and Ryan Browne has its latest issues collected in CURSE WORDS TP VOL 04 QUEEN MARGARET. Wizord has made plenty of enemies on Earth, and now those enemies have joined forces to get their revenge. But its not just Wizord they're after, they're after his entire family of sorcerers.

Last year saw the Man of Steel celebrate his 80th birthday, now those honours go to the Darknight Detective with DETECTIVE COMICS 80 YEARS OF BATMAN DLX ED HC. Featuring stories from Detective Comics, spanning over eight decades, witness the evolution of Batman from Bill Finger and Bob Kane's avenger of the night during the 30s, to the caped crusader from during the 40s through 60s and culminating with the gritty crime fighter from the 70s to today. If there's one book you need for a crash course in all things Batman, then this is the book for you.

After the superstitious Alex Mills broke her mother's back stepping on a crack, she'll journey to the world where Earth's superstitions draw power from in HAPHAVEN GN, from Norm Harper and Aussie local artist, Louie Joyce. In the dreaded land of Haphaven, Alex must undo her bad luck by finding the lucky rabbit's foot and heal her mother's injury, but she also runs the risk of being cursed for an eternity.

The latest stories from Tom Parkinson-Morgan's popular webcomic series comes to paperback for all to enjoy with KILL 6 BILLION DEMONS TP VOL 03. Allison Ruth, in search of a long lost friend, she'll need to fight her way into the depths of a treasure fortress, where she will also have to combat her own inner lust for power.

A cold-blooded killer of an espionage agent, known only as the Black Kaiser, find himself on his latest mission in the US in POLAR HC VOL 00 BLACK KAISER, from Victor Santos. As you watch him stalk his prey, learn the dark back story required to mold a hitman in his image.

Rick Grimes and his surviving cohorts are back for more horrific adventures from Robert Kirkman in WALKING DEAD TP VOL 31. Things seem calm at first, as Rick gives the Commonwealth's governor a tour of the various communities Alexandria is united with, only for awful things to start occurring.

With the latest story arc awaiting more issues before it's collected, tide yourself over with Keiron Gillen's WICKED & DIVINE TP VOL 08 OLD IS THE NEW NEW. Featuring all the Wicked & Divine specials, containing work from a slew of artists, including Gillen's collaborator on his new book Die, Stephanie Hans, you can't call yourself a Wicked & Divine enthusiast without it.

And there is it. Of course this is but the tip of the comic iceberg for this week, so if you spot something on this horizon, let us k now before close Tuesday for us to get it sorted.
Until we see you next, live life and read comics!