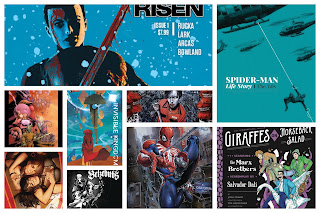 Top of the week to you good comic folks. Ready for everything this week is about to throw at you? Us neither but at least Wednesday brings us some joy in comic form!

We love Chip Zdarsky don't you know and Mark Bagley's (he's alright we guess) and their new (no doubt future award winning) mini SPIDER-MAN LIFE STORY #1 (OF 6).  This tale tracks the history of Peter Parker through the decades, from the 60s of his debut, to the current era. But there's a twist, Peter will age in real time, and deal directly with not just his conflicts, but the social issues everyone faced in those times. When Flash Thompson is drafted into the Vietnam war, how will Peter decide where his duty lies?

If that's not enough Spider-Man for you, then you have to check out the star of the video game with world wide acclaim, Spider-Man, in his own miniseries with SPIDER-MAN CITY AT WAR #1 (OF 6), from Dennis Hopeless and Michele Bandini. After eight years of learning the ropes, Peter Parker finally takes down the Kingpin. But will the power vacuum left in the crime lord's wake be more devastating than anything done to New York City before?

A new Dungeons & Dragons adventure from B. Dave Walters and Tess Fowler debuts with DUNGEONS & DRAGONS A DARKENED WISH #1. Within, you'll see legendary heroes return from beyond to defend the Moonshae Isles from war, whilst the wizard Helene and her cohorts forever change the Forgotten Realms.

In the latest science-fiction epic from former Ms. Marvel writer, G. Willow Wilson, and artist, Christian Ward, two unlikely women will unite to uncover a vast conspiracy in INVISIBLE KINGDOM #1. One is a religious acolyte while the other is a battle-hardened freighter pilot, and now they're both on the run from the religion and the corporation that runs the world.

At long last, Greg Rucka and Michael Lark's hit dystopian sci-fi Image series is back with LAZARUS RISEN #1, and in prestige format too, as befitting such an excellent series. It has been two years since the Carlyle family had been betrayed in the Conclave war, and that war still rages today. Now, Johanna Carlyle rises from the fall of her family to return them to their former glory.

Following the events of a coup d'etat, the Authority has taken over the position of absolute political power in AUTHORITY BY ED BRUBAKER & DUSTIN NGUYEN TP. Now that the dust has settled, the world has gotten used to this new order, but those within the United States of America are divided, signalling that it may be time for another American Revolution.

The unlikely team of Batman and Penguin is at the forefront of Tom King's latest issues, all collected within BATMAN TP VOL 09 THE TYRANT WING. Following attacks on his family and his status as a hero, the Dark Knight finds himself caught in a turf war between Penguin and a mysterious foe. All that intrigue, plus an annual written by local writer Tom Taylor, and some short stories from some of DC's rising talents.

Your favourite cast of dogs are back to solve another problem plaguing their best friends in Evan Dorkin and Benjamin Dewey's BEASTS OF BURDEN WISE DOGS & ELDRITCH MEN HC. The Wise Dogs clear up some seemingly unrelated supernatural events in Burden Hill, only to find they all lead back to a cult of survivalist witches, who may be the ones behind all the mayhem.

Starting off as just scribblings and doodling, JP Ahonen has refined his family of characters, the children of whom are part of a black-metal band in BELZEBUBS HC. With a story that's all about family life, raising kids and worshiping the man downstairs, you'll laugh, you'll cry and you'll want to do it all listening to some metal music. Rock on!

With an adaptation coming to the small screen, now is a perfect time to check out the BOYS OMNIBUS TP VOL 01, from acclaimed co-creator of Preacher, Garth Ennis, and artist, Darick Robertson. The world is protected by superheroes and masked vigilantes, but who protects the world from them? Why, the CIA-backed team known as the Boys, of course.

An epic run that had fallen by the wayside finally gets a new print run with IRON MAN BY FRACTION & LARROCA COMPLETE COLLECTION TP VOL 01. Matt Fraction and Salvadore Larroca take Tony Stark to places new and old, as he tries to redeem himself following his failure as Director of SHIELD during the Secret Invasion. If that wasn't hard enough, then keeping the identities of his allies secret from Norman Osborn, the new head of HAMMER, will crank up the difficulty. Let's hope Tony doesn't lose his mind over this... literally.

Nancy Drew meets the modern age in her new, self-titled series, NANCY DREW TP PALACE OF WISDOM, from the current writer of Captain Marvel, Kelly Thompson, with art by Jenn St-Onge. She's still the best at everything, especially solving crimes, but a mysterious message she receives will bring her back home, and make her rethink which of her friends are still friends, and which have become her enemies, especially the one hell-bent on killing her!

He always fought the good fight, and Logan gave his life to win just one more battle. But just as it was beginning to feel final, Charles Soule and Declan Shalvey strike back with RETURN OF WOLVERINE TP. Wolverine may be back, but questions still linger: who brought him back? Why did they bring him back? If you want to know the answers to Wolverine's rebirth, you have to add this book to your collection.

After being divided into different teams, the X-Men finally reunite under the pen of Matthew Rosenberg, Kelly Thompson and Ed Brisson in UNCANNY X-MEN TP VOL 01 X-MEN DISASSEMBLED, which reinvigorates and reinstates the flagship title. The full, ten issue opening arc is collected in one volume to kickstart your renewed love of Marvel's Merry Mutants.


Dick Grayson and his Teen Titans were always on the defence against their eternal foe, Deathstroke. But now Damian Wayne is in charge, the team is getting a lot more proactive about stopping Slade Wilson in TEEN TITANS #28 TERMINUS AGENDA, from Adam Glass, Christopher Priest and Bernard Chang.

In this special, mega-sized issue, get to know more about the early life of Mal Reynolds' eventual wife, Saffron in FIREFLY BAD COMPANY #1, from Josh Lee Gordon and Francesco Mortarino. It's the origin story you don't want to miss, and you'll have more of the Firefly timeline uncovered.

The most powerful man in the Valiant Universe gets the spotlight in LIFE & DEATH OF TOYO HARADA #1 (OF 6), from Joshua Dysart, and a line up of artists, such as Mico Suayan, CAFU and more. A figure of controversy, Toyo Harada is trying to save humanity from itself, providing humanity doesn't kill him first.

Chip Ipswich is a regular enough man living the hard life in a town in America's heartland. Well, he's as regular as a vampire gets, at any rate. Working a dead end graveyard shift job at the local gas station, Chip's about fed up with his lot in life, until someone new turns up in town. The story is only just beginning, so be sure to check out DARK RED #1, from Tim Seeley and Corin Howell.

When the royal family of the post-apocalyptic kingdom, Pacifica, is decimated, the only heir left is the nine year-old Zakaiah. Expected to undergo trials to test her resolve and ability to rule, she instead embarks on a journey of her own in Don Aguillo's RISE #1, hoping to be ready to shoulder the burden of the kingdom by its end.

For you lovers of dinosaurs, you have to pick up the equal parts heartwarming and heart-wrenching book, CRETACEOUS GN, from Tadd Galusha. Set in the titular Cretaceous era on Earth, see the journey one young Tyrannosaurus Rex takes to find the family he was separated from.

In a future where everything runs on phone apps, Charlie Ellison finds herself the target of an assassination funded by the crowds in CROWDED TP VOL 01, from Christopher Sebela and Ro Stein. With the Reapr app being used against her, Charlie will rely on the services of Vita, a bodyguard from the Dfend app, rated the lowest for her use of practical rather than flashy protection decisions. Together, they'll get down to the bottom of who filed the initial hit against Charlie, and try to stay alive while they do it.

Back in the day, there was once a plan for the surreal artist, Salvador Dali, and comedy group, the Marx Brothers, to collaborate on the weirdest film ever. Only a script was written, until MGM rejected it, and it was thought lost... until today! Having been found and adapted by Josh Frank, polished by comedian Tim Heidecker and illustrated by Spanish artist, Manuela Pertega, you can now experience the strangest movie never made in GIRAFFES ON HORSEBACK SALAD GN.

It's the year 26 AD, and a young carpenter from Nazareth is struggling to find his place in a most violent world. He knows he's different from everyone else, but he doesn't know why. Lucky for him, he's about to find out how in JESUSFREAK HC, from Joe Casey and Benjamin Marra.

The first chapter of Rick Remender and Jerome Opena's story of the world of Zhal in SEVEN TO ETERNITY TP VOL 03. Collecting the latest issues, see Adam Osidis walk a line between tough choices and internal compromise, as he must defend the man who murdered his father to save the life of many others from disease.

Stjepan Sejic  begins a new storyline in his popular original graphic novel series with SUNSTONE OGN VOL 06, called Mercy. As Anne and Alan's relationship deepens, they find more questions rising up, and they'll need to find a way to answer as many as they can to ensure their happiness can endure.

And there you go, plenty to keep you happy and smiling for the next little bit. Spot something else you need, be sure to let us know to add it before close Tuesday as late requests placed on Wednesday might not get filled!
Until we see you next be safe, live life and read comics