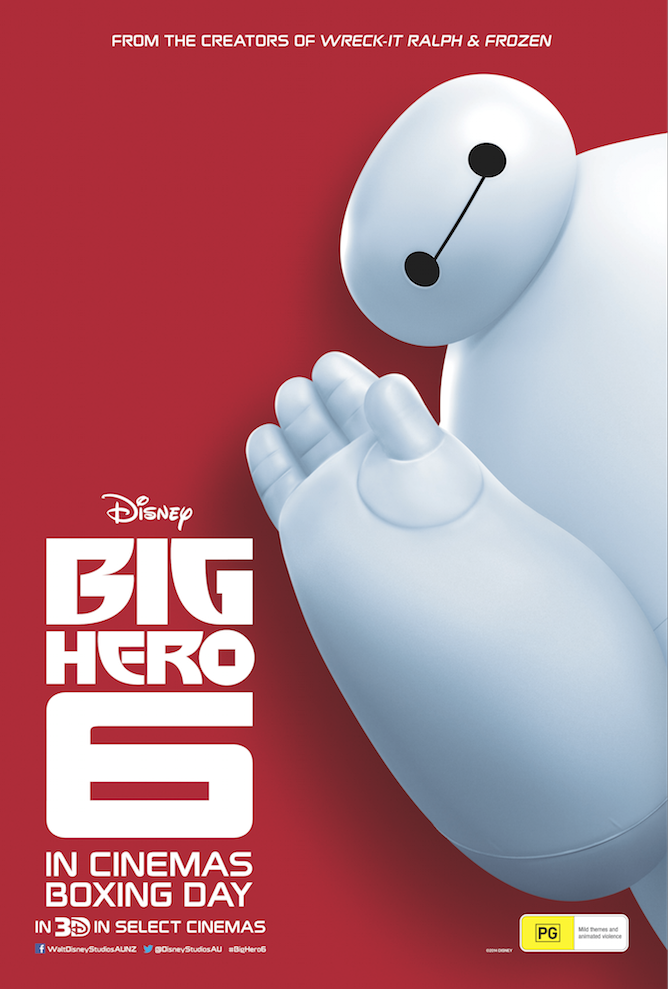 From Walt Disney Animation Studios, the team behind “Frozen” and “Wreck-It Ralph,” comes “Big Hero 6,” an action-packed comedy-adventure about the special bond that develops between Baymax (voice of Scott Adsit), a plus-sized inflatable robot, and prodigy Hiro Hamada (voice of Ryan Potter). When a devastating event befalls the city of San Fransokyo and catapults Hiro into the midst of danger, he turns to Baymax and his close friends adrenaline junkie Go Go Tomago (voice of Jamie Chung), neatnik Wasabi (voice of Damon Wayans Jr.), chemistry whiz Honey Lemon (voice of Genesis Rodriguez) and fanboy Fred (voice of T.J. Miller). Determined to uncover the mystery, Hiro transforms his friends into a band of high-tech heroes called “Big Hero 6.”Inspired by the Marvel comics of the same name, and featuring breathtaking action with all the heart and humor audiences expect from Walt Disney Animation Studios, “Big Hero 6” is directed by Don Hall (“Winnie the Pooh”) and Chris Williams (“Bolt”), and produced by Roy Conli (“Tangled”).

Thanks to those technological mastermind's at DISNEY and BIG HERO 6 in cinemas Boxing Day, we have 10 Quad In-Season Passes to give away! That's right, you and three friends could be off to see this Summer's biggest animated feature!

To go into the draw for your chance to win all you need to do is tell us, "In a classic "Rock Em, Sock Em Robots" battle, what other fan favourite robot would you like to see Baymax throw down with?"

Only entries made via the the comments on the Facebook post will be included in the draw.
All entries will go into the All Star Barrel and winners will be drawn at random.
Entries close 6pm Monday the 22nd of December and winners will be announced Tuesday the 23rd.
Tickets will only be available to pick up from the store and winner must produce photo ID upon pick up. Tickets MUST be picked up no later than a week after the draw. Any remaining tickets after this date will be given away at our discretion to make sure they don't go to waste.


A huge thanks again to DISNEY and BIG HERO 6 In Cinemas Boxing Day
Posted by All Star Comics Team at 8:12 AM