ALL STAR RECOMMENDS FOR MAY 12TH 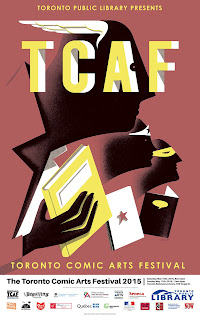 Hi there, fellow lovers of the four-colour form. Another week of comic book excellence awaits us!

Before we get going, a hearty shout out to Australian writer Ryan K. Lindsay, whose series Headspace jumped from the digital format at Monkeybrain to the printed format at IDW last week. Ryan is a friend of mine, so I felt a bit odd about possibly using Headspace as the feature book, but I will say that it’s totally well worth your time and features one of those “I shoulda thought of that” premises with its lawman protagonist trapped inside a serial killer’s mind. Ryan works harder than you and I combined. He’s tireless and passionate. He’s coming into his own and, with his Negative Space arriving from Dark Horse this year, he’s someone to watch.

Also, TCAF (Toronto Comics Arts Festival) was last weekend and I wipe tears from my eyes because I missed it. This year, Charles Burns, Julie Doucet, Hunt Emerson, Scott McCloud, Noelle Stevenson, Gengoroh Tagame, Chip Zdarksy and many, many, many more were on hand. Available to buy was hands-down the most incredible looking line up of debuting comics I’ve seen in…. I don’t know how long. Sigh. I was at TCAF last year, moderating a film and comics noir discussion with Ed Brubaker and Darwyn Cooke, and in my opinion, it is the standard bearer for the future of comics conventions – free, filled with comics of all sorts, and very friendly. It’s seriously worth planning a trip to Canada for. In honour of the event, here’s a great piece from Canada’s own NOW magazine on Zdarsky. If you’re a fan, or even just a curious observer of The Rise of Chip, you should take a look.

Finally, my favourite comics columnist, Joe McCulloch, crushed it last week with a kind of Free Comic Book Day as memoir-slash-review piece. You really should read it. 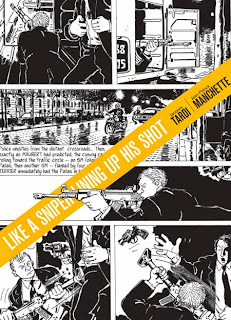 COMIC OF THE WEEK : LIKE A SNIPER LINING UP HIS SHOT BY JACQUES TARDI FROM THE NOVEL BY JEAN-PATRICK MANCHETTE
Published by Fantagraphics

Hollywood. It both excites and terrifies us when it gets hold of the things we love. Sometimes, the project turns out pretty well. Occasionally, the right people and the right project and the universe and luck and money and a million other things all come together and it turns out exceptionally. Often, however, fans of the source material that Hollywood gets its cash-filled mitts on are left at best disappointed. At worst, outraged.

Enter The Gunman starring Sean Penn, Idris Elba and Ray Winstone. The film is an adaptation of French writer Jean-Patrick Manchette’s 1981 novel,The Prone Gunman, one of my favourite crime novels ever. I still haven’t seen the film and I could be wrong, but from trailers it resembles the source material only on a base level. The germ of the plot appears to be there, but it looks more like a Matt Damon Bourne movie rather than the grubby little book that constantly spits out little hardboiled lines like, “I like whiskey sours because they taste like vomit.”

But it’s okay. Good or bad, I can take a deep breath because the novel has already been faithfully adapted. Into comics. And it’s incredible.

Like A Sniper Lining Up his Shot is one of three competed Manchette adaptations by the masterful French cartoonist, Jacques Tardi (a fourth, Fatale, was sadly never finished). In Sniper… Martin Terrier is an ex-mercenary turned hitman who really just wants to hang it up and retire gracefully and peacefully with an old flame. In true crime fiction fashion, however, his employers are not happy about this decision, enemies linked to a past hit seek vengeance, and the old flame has a life of her own that she might not be so willing to give up.

It all sounds remarkably generic boiled down to its essentials, but the genius of Manchette was less in his twists (of which there are a number) but more in the clipped dryness of his delivery and the cold, emotionally-devoid interactions of his characters. Terrier moves through the surprisingly quirky plot like an automaton and while this archetype is not uncommon in crime fiction, the lack of charm in Manchette’s characters or bubbliness in any plot hijinks casts a layer of existential frostiness over all his work. Encountering his writing is like reading Sartre or Nietzsche or Camus for the first time, only with hitmen and vengeful fatales and mental patients and guns, so many guns.

As Darwyn Cooke is unquestionably the artist to bring Richard Stark into comics, so Tardi is the artist for Manchette. His rubbery, cartoonish, unsmiling, ink-smeared figures are perfect for the amoral characters that fill Manchette novels. His devotion to the source material, like Cooke’s, is clear but does not shackle him slavishly to every line. His pacing is perfect; his pages are busy but clear, cinematic in their shot choices. His scenery is rendered intricately and realistically, his rain-washed Paris and wintery French countryside are both grim and lively, perfect homes for these shady, joyless killers to move about in.

The sparseness of Manchette’s prose lends itself perfectly to comics and particularly to Tardi. In turn, Tardi, in the starkest, crispest black and white, is able to capture all of Manchette’s traits – the increasing oddness of the unfolding plot, the perfunctoryinteractions of these unattractive, scowling characters, the bleak, black humour—expertly on his pages.

As with many things I try and plug here, Like A Sniper Lining Up His Shot is apparently almost out of print. If you’re a fan of noir or hardboiled crime comics, it doesn’t get much better than this.

WEBCOMIC OF THE WEEK : IF MY DOGS WERE A PAIR OF MIDDLE-AGED MEN
By Matthew Inman

You may have caught this already as it’s one of those things that blew up on social media, but I had so much fun with this I just had to include it.

Matthew Inman’s terrific little comics flip the anthropomorphic script, showing us just how both crazy and endearing canine behaviour is by imagining his two dogs as portly, ageing men. The result is weird, gross, but also strangely sweet and very funny. It also made me think about just how much I love my own dog, Bea (who once enjoyed fleeting fame on the Fantagraphics Blog for her championing of Graeme Chaffee’s Good Dog)and that’s never a bad thing.

Harrow County #1 by Cullen Bunn and Tyler Crook drops tomorrow! I got to read it a few weeks back and liked it a whole lot. Here’s a look at Crook’s colouring process. How deceptively easy it looks to create such gorgeous art…

Cameron Ashley spends a lot of time writing comics and other things you’ll likely never read. He’s the chief editor and co-publisher of Crime Factory (www.thecrimefactory.com). You can reach him @cjamesashley on Twitter.
Posted by All Star Comics Team at 11:44 AM