ALL STAR RECOMMENDS FOR MAY 19TH 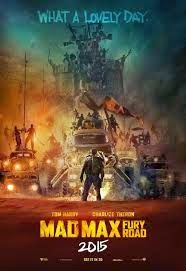 So I literally just got back from Mad Max: Fury Road and my eyeballs are leaking joyful tears of blood. I am just so thrilled that the film exceeded my expectations and lemme tellya I had, like, Lord Humongous-sized expectations. I noticed that Brendan McCarthy was credited as co-writer and realised I had completely forgotten that this was the comic industry’s own Brendan McCarthy.

There’s a terrific article here about McCarthy’s enthusiasm for the world of Max, his involvement in Fury Road and how Mad Max informed Freakwave, an early collaboration with Peter Milligan. I felt like a total dunderhead that all this had slipped my mind….

Also, as I worked on the below Comic of the Week, which happens to be an Archie Comics publication, news broke of Archie’s ambitious Kickstarter. Created to fund the launch of three rebooted titles, Jughead, Betty and Veronicaand Life With Kevin, the $350,000 sought by the company was quite a massive chunk of change and questions quickly arose over both the necessity of and the reasons for the venture. Things quickly became rather divisive. As I was literally taking a final pass at this column, I found out the whole thing had been cancelled. In all honesty, it’s probably a good move.

As I’m currently sitting at 1 in 5 delivered Kickstarter endeavours (and this includes my beloved Fantagraphics, which still not fulfilled its obligation to me) I’d sworn off backing crowdfunded comics for quite a while anyway, but I was keeping an eye on this. I like Archie Comics a lot. It has balls. It is embracing diversity. It has a tonne of talent working for it. There’s no doubt the material will be top notch. Chip Zdarksy on Jughead? Adam Hughes on Betty and Veronica? It’s genius creative casting.

We’ll all just have to wait a little longer for them, that’s all. 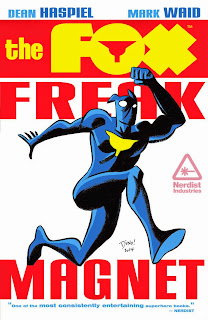 The stable of characters in Archie Comics’ superhero imprint, Red Circle, has had a number of reboots of varying success over the decades since their creation. As Red Circle morphed into Dark Circle earlier this year, the imprint continued to grow, evolve and mature. However of all Red Circle’s roster it’s The Fox, currently helmed by artist and plotter Dean Haspiel, which has maintained some truly old-fashioned comic book kookiness.‘Freak Magnet’ collects Haspiel and co.’s first five issues and the result is one very slick, very colourful and very fun comic book.

Although originally created in 1940, this iteration of The Fox sees flagging reporter Paul Patton Jr attempting to drum up some dwindling photojournalism work by dressing up in his dad’s superhero outfit, hitting the streets and making the news himself. This plan (which, if you think about it, was likely patented by one Peter Parker) was initially successful, buthas ultimately backfired terribly. Paul is now a “freak magnet,” perpetually attracting the strange and the deadly. Constantly forced to don the tights to get himself out of trouble, all he truly wants is to be left in peace to reforge a relationship with his daughter and enjoy some down time with his wife, who also happens to be the costumed adventurer, She-Fox. However, it’s just simply not meant to be.

It’s refreshing to see scripter Mark Waid working on something so wonderfully oddball, proving that there’s really nothing this veteran can’t do. Stuffed full of ideas such as a corrupting social media platform created by a demonic villain, an interdimensional landscape made of diamonds, an evil druid, a being that huffs out “hallucinobreath,” time travel and much more,The Fox treads some incredibly weird ground for what is, effectively, a street level hero.

Its success must be chiefly attributed to the sensibilities of Dean Haspiel, who channels the psychedelic weirdness of his creator-owned Billy Dogma work with a love of Silver Age shenanigans.The five issues collected in “Freak Magnet” are jam-packed – never standing still for any length of time they also constantly escalate in scale. Somehow, there’s even room for a backup story featuring WWII adventurer, The Shield (drawn by Mike Cavallaro and scripted by another superhero veteran in J.M. DeMatteis). Re-examining the dynamics and clichés of the patriotic wartime hero,The Shield even manages to seamlessly dovetail into The Fox’s main storyline, giving the collection a suitably epic ending.

As Haspiel himself puts it in the afterword, The Fox has allowed him to “unleash unbridled action and adventure where a reluctant antihero could wax desires and anxieties while kickboxing psychotronic monsters and galactic druids.” If that doesn’t sound like your cup of tea, I’m not sure what will. 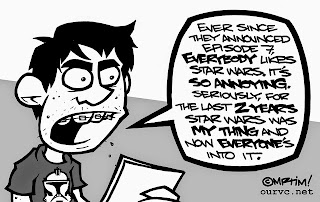 WEBCOMIC OF THE WEEK : OUR VALUED CUSTOMERS
By Tim Chamberlain

The one panel gag strip is difficult to do consistently but Tim Chamberlain ’s apparently real life snippets of comic shop customer dialogue are generally really solid. It’s likely the echoes of things we’ve all overheard, either in person or online, captured here in all its snarkiness that makes it resonate so well. Either way, it makes me curious as to what Team All Star has overheard during the years….

COMICS VIDEO OF THE WEEK : GLEN ORIBIK A GALLERY

Terribly sad news last week. Painter Glen Orbik is no longer with us. A titan of his field, Orbik painted distinctive, striking covers for both comics and crime book imprint, Hard Case Books. His Hard Case work is likely what he’ll eternally be remembered for as he caught the spirit of classic pulp paintings and either replicated it or updated it perfectly, depending on the needs or age or setting of the particular title. But, ever versatile, he sure could paint those superheroes too.

Orbik squeezed a massive amount of energy into paintings that never appeared static, unlike those by many of his peers. Here’s a video gallery of his covers work, clearly displaying his versatility and the ease with which he moved from, say, Aquaman to Christa Faust’s Money Shot. He was amazing.

See you next week (where things get dark!). Love your comics.