ALL STAR RECOMMENDS FOR JULY 21ST

Good day you, fine reader. I hope you’re escaping from the cold by snuggling up with loved ones and reading a few funny books. There were a number of truly excellent comics published last week, so there’s really no excuse.

Did you know there’s a launch on in-store this week? Well there is! Comicsmas in July is this Saturday, July 25th with Frank Candiloro, Ashley Ronning, David Blumenstein and Alisha Jade all launching new books. With Frank and Ashley both having appeared in this column before, you bet I’ll be there at some point. Should be fun. 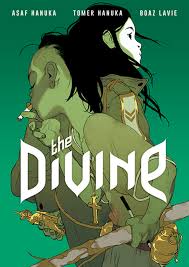 COMIC OF THE WEEK : THE DIVINE
By Asuf Hanuka, Tomer Hanuka and Boaz Lavie
Published by First Second

Although inspired by the true story of Johnny and Luther Htoo, twin boys who led a collective of refugees named God’s Army, The Divine is far from a real world slice of war-torn drama. Instead this 150 page book is a surreal slice of the fantastic that grows ever more nightmarish as its pages turn, morphing into something like Akira meets Apocalypse Now. It’s a strange but compelling beast, with simply gorgeous artwork bursting out from its white-bordered pages.

Created by illustrators and comics artists Asuf and Tomer Hanuka and writer Boaz Lavie, The Divine is set in the fictional Southeast Asian country of Quanlom. Exploited by the West for its rich mining potential, the land is being torn apart and its peoples displaced. Explosives expert Mark is freshly-married, has a baby on the way and is denied a big promotion. When an old friend, a military contractor named Jason, comes calling with a big, quick, high-paying job “lava tube denuding” (or “blowing up mountains” as Mark puts it), he reluctantly agrees, not knowing that both the spirts of this ancient land and a particularly brave, young  and violent section of its people will stand in his way.

It’s The Divine’s slow descent into weirdness, darkness and the supernatural that, narratively, makes this thing work. There’s some great foreshadowing in the form of a simple shaving nick that signals the ominousness ahead and some wonderfully oddball dreams, normally a real peeve of mine, are included and are just too well realised to dismiss as simple filler.

It’s not perfect, unfortunately.  Jason is far too obvious and one-note as the Ugly American, spouting lines like, “Maybe you didn’t notice but the job is done. We’re not getting paid to babysit locals.” However once The Divine, gifted sibling child soldiers who lead the resistance against the destruction, deforestation and displacement happening in their country, enters the picture you’ll forget all about this caricature of a villain.

And the art. Oh, the art. From its sweaty nightmare-born techno-womb to the mountainous Quanlom terrain, to its boy soldiers, to its dragons (yes, dragons), to its frozen moments of explosive violence, The Divine is simply a gorgeous piece of work. Again I wish First Second would reconsider their formatting as Tomer and Asuf Hanuka’s work is screaming out for a larger presentation. It’s a testament to just how good the Hanukas are that I was able to get lost in their sumptuously coloured pages given how reduced they are in finished presentation.

If you’re curious, my advice is don’t even flip through The Divine. Just get it home, read it and get sucked right in to the magenta overload of its pages. You’ll likely have some story quibbles, but that’s alright – you can’t argue with its art or its heart or the coolness of its mythology. 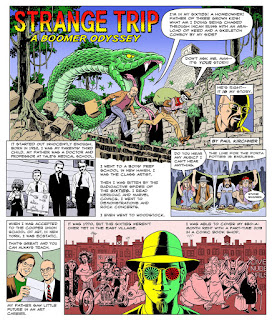 WEBCOMIC OF THE WEEK : STRANGE TRIP: A BOOMER ODYSSEY
By Paul Kirchner

A reminder that it’s not just in the current comics economic market that talented creators struggle, Kirchner’s resignation to a career in advertising to make ends meet even after giving the world the Kafkaesque commuter journeys of The Bus for Heavy Metal and Dope Rider for High Times is sad indeed. Fret not though, for art wins in the end. As it always should.

Strange Trip is a brisk, witty and compact read, perfectly paced and full of nice little period details as Kirchner rips through the decades to arrive right back where he started, drawing his two most famous creations once more.  Vintage episodes of The Bus are also linked to in the Globe article and come highly recommended also. The Bus is superbly dreamy and may make you feel slightly better about your own journeys across the slowly-choking PT system of wherever it is you actually are. Check it out. 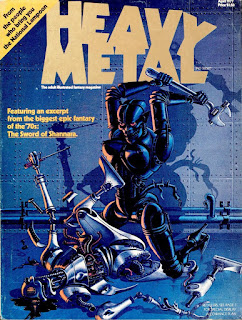 “From the people who bring you National Lampoon,” says the top left corner of the cover to Heavy Metal’s debut issue from April of 1977, a publishing arrangement which would not last anywhere near as long as the brand’s influence or legacy. The cover of this first issue of “the adult illustrated fantasy magazine” featured a painting by Jean-Michel Nicolette in which an enraged, big-boobed, stiletto wearing robot of death beats an asexual droid into scrap metal with a gigantic wrench.  A fine summation of this periodical’s glory days indeed.

In the editorial, the good folk from National Lampoon say of France’s Metal Hurlant, or Screaming Metal, the source material for much of their product: “The magazine appears to be the work of an alien intelligence, as indeed it is. It is French.”

Still as strange as that is you can’t fault the early US editors of the magazine for their taste. They recognised the potency of the European material they had on their hands and also the opportunity cut the product with liberal doses of comics by off-kilter American creators, diluting the Euro-madness somewhat and adding perhaps a slightly more comprehensible, palatable strain of American fantasy to their pages.

It’s a heady brew, this debut issue, chock full of now-legendary creators and profoundly influential comics. There’s literally too much good, eclectic stuff for me to cover in this space – including an excerpt from Terry Brooks’ The Sword of Shannara and the incredibly strange collaging at play in Age of Ages by Norman Rubington, but special mention must be made of two features.

Arzach by Moebius also makes its English-language publication debut here, not that language is an issue as the comic itself is silent.  Arzach the warrior soundlessly sails through the landscape of the subconscious on a giant albino pterodactyl-type creature and, in the process, blew more comic book reading minds than likely anything preceding him. Profoundly important and influential, Arzach is still glorious.

There’s so much more to love here, Conquering Armies, Space Punks and even Sunpot by Vaughn Bode (whose work I’m forever ambivalent about, to be honest) raise the underground comix cred considerably.  An all-time classic debut.

COMICS VIDEO OF THE WEEK : THE ART OF HEAVY METAL MAGAZINE

Yep, to celebrate me insanely writing about as many issues of Heavy Metal as possible until the Grant Morrison era begins, here’s a cool little video sampling what you’re in for.  Man, I hope Morrison gets Corben back. That would blow my puny little mind.

Cameron Ashley spends a lot of time writing comics and other things you’ll likely never read. He’s the chief editor and co-publisher of Crime Factory (www.thecrimefactory.com). You can reach him @cjamesashley on Twitter.
Posted by All Star Comics Team at 2:11 PM