ALL STAR RECOMMENDS FOR JULY 7TH

You should take a moment to feel bad for Mitch, All Star co-owner and all-round good guy, who is likely away from the Californian sun and the best fish tacos he’ll probably ever eat in his life to format this column.

Actually, you should not. He’s in San Diego rubbing shoulders with the stars at Comicon. And you? You’re stuck with me. No justice in this world, none at all...

Still, let’s keep it shortish for him.  Have another margarita, Mitch, you lucky bastard. 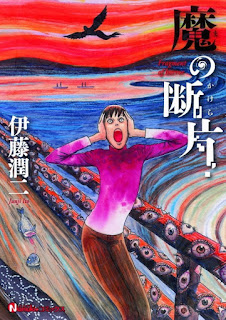 COMIC OF THE WEEK : FRAGMENTS OF HORROR
By Junji Ito
Published by Viz Media

“This world is jam-packed with dark nature spirits!” screams a character on the second page of Junji Ito’s latest collection of horror stories, Fragments of Horror, released in English a couple of weeks  ago by the good folk at Viz. If the cover (a homage to Munch’s “The Scream”) doesn’t spell it out clearly enough for you there it is –on page TWO – the chassis of Ito’s Horrormobile. Like HP Lovecraft, like William Hope Hodgson, like fellow countryman Ryunosuke Akutagawa, Ito is obsessed with the things that piece the flimsy membrane that separates our reality from the next. These glimpses into the beyond and the realisation that we are the punchline of some grand cosmic joke is what sends many a weird horror protagonist into a spiralling hellish madness (and/or death) and Ito’s work is no exception to this.

“Futon,” the opening story, is a short, sharp manifesto. It’s a message from the author to his audience reminding us that although he’s been away from horror for some time (his last work strictly in the genre was 2006), the man who gave us Tomie, the wonderfully bizarre Uzumaki and Gyo, his ode to death-stench, has not forgotten the supernatural oddities that power his work or the relatively banal, everyday items and activities that ground it.  In “Futon,” a man catches a glimpse of what lies beyond, and the cosmic irrationality of his newfound ability to piece the interdimensional veil leaves him a bedridden mess. As his visions increase, he melts into his futon becoming a spongy phosphorescent mould “with strong hallucinogenic effects.” In “Wooden Spirit,” a house built in the mid-1800s and inhabited by the builder’s descendants, becomes a grotesquely hairy, multi-eyed monster. “Blackbird” gives creepy new life to the worn-out J-Horror trope of the long-haired female doom ghost, with its revolting, plump-limped spirit – looking something like Sadako from Ringu gone collagen injection nightmare.

If meltdown at the pointlessness of it all is not really your bag and you like things a bit more visceral, there’s also plenty of body horror on offer here, all of it presented in Ito’s almost ironically clean lines. Like the work of the legendary manga-ka Kazuo Umezu before him (I discussed 10,000 pages of Umezu’s wonderful work here), Ito’s adept at subverting the “cute” as proved by the violence, deformity and ruin he frequently inflicts on his characters once handsome and clean-cut appearances.
In “Dissection-Chan,” cosmic and body horror aficionados alike have their cake and eat it when a young woman with a desire to be dissected stalks a medical student. In “Tomio: Red Turtleneck,” a man cheats on his girlfriend with a demonic fortune teller.  In “Magami Nanusuke,” a writer obsessed with odd physical tics is visited by a super fan. All three of these tales have surprising, strange and disgustingly embodied horrors awaiting their readers.

Seriously, there’s not a dud amongst the eight stories collected in Fragments of Horror. It’s the perfect read for those looking for something a little different in their comic book horror and a great sampling for those curious about Junji Ito but have yet to take the plunge into his inky, trans-dimensional waters. 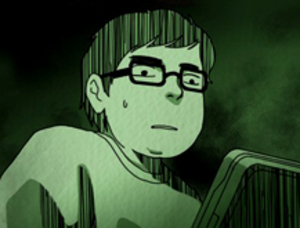 Okay, seeing as this is, like, probably the most famous webcomic ever (top five easy), I won’t be offended if you skip this section and chastise me for being too popularist. But thematically, man, it just fits so well…

Dropped upon an unsuspecting, now permanently-terrified public in 2011, The Boncheong-Dong Ghost proves that it’s not just the Asian horror of creators like Junji Ito that we’ve got to worry about because Japan’s Korean neighbours are next-levelling the stuff and giving it away. The Bongcheong-Dong Ghost proved scary enough to spawn memes, reaction videos and all sorts of annoying internet culture stuff that should not spoil your enjoyment of what is undoubtedly a comics classic. Seriously. It will be canonised one day.

For the uninitiated: I am saying nothing except make sure you are reading on your laptop or PC with your Flash or whatever all updated, scroll very slowly, turn your sound up and, if you’re feeling particularly brave, turn the lights off.

Honestly. Be careful with this one if you’ve never read it. It packs scares.

So the above rambling about the crushing weight of ever-descending cosmic horror and the revolting mess that lies beneath all of our skins was not enough to convince you to try Junji Ito’s work. Hmm. Okay, maybe the effortless charm possessed by Jonathan Ross will do the trick.  Here’s Ross, interviewing Ito for his terrific Japanorama series which ran, in total, from 2002-2007 (and should be watched by all!). It’s a short interview, but notable for how politely the sweet-looking Ito handles Wossy’s terrible jokes.

Cameron Ashley spends a lot of time writing comics and other things you’ll likely never read. He’s the chief editor and co-publisher of Crime Factory (www.thecrimefactory.com). You can reach him @cjamesashley on Twitter.
Posted by All Star Comics Team at 3:45 PM