ALL STAR RECOMMENDS FOR JULY 28TH 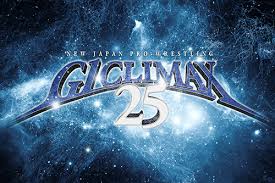 Who reads comics and has an obsessively detailed G1 Climax 25 spreadsheet printed out to handily tally points? This dork!

No time for talk. It’s night four as I type this.

COMIC OF THE WEEK : BORB
By Jason Little
Published by Uncivilized Books

So as you may know, All Star co-owner Mitch is overseas being an Eisner-winning big shot and posting pics of himself with Mike Allred and Ed Piskor on Twitter. I know, I know, I want to hate him too. The thing is he’s just way too nice to even get so much as annoyed at. Here’s proof in the form of a slice from one of his emails to me, upon arriving in San Francisco:

“…the way the homeless have to live is terrible. There is like a horrible, unspoken understanding between them and everyone else, where for the most part neither party acknowledges each other's existence. It's a horrible sense of making them invisible, I can't imagine how it must make them feel.”

We’ve all likely felt this way at some point. The conflicting unease, sympathy, mistrust, disgust and heartbreaking sadness of the plight and appearance of the much less fortunate can take some digesting, particularly if you experience all of these reactions simultaneously which can happen. This unease is even heightened when visiting foreign countries where the circumstances of the homeless are frequently far worse and way more in your face than they are here. And maybe you look a round, see a guy with a cardboard sign and a fresh pack of cigarettes and sometimes think do they really even have it that bad? With some shame I must admit that in my lowest moments I’ve actually had a slight pang of envy at the homeless in Japan, many of whom live a seemingly peaceful existence in tight little social clusters in blue-tarp covered domiciles that quite often look really cosy.

Even here in Melbourne, things can’t be that bad, right? I see Bianca, Shane and Boof at least several times a week. That beautiful dog is virtually a celebrity at this point. They’ve tapped into electricity and can “lock out intruders,” so how bad can their lives be?

This envisioning of homelessness as some sort of romantic, off-the-grid, vagabond lifestyle is remarkably insensitive, offensive, completely absurd and likely makes me sound like a total asshole. I’m just trying to be honest here though, because Borb, by two-time Ignatz-winning and Eisner- nominated creator Jason Little, will make you have a good hard look at yourself, your level of empathetic capability, your aloofness and the degree to which you’ll completely separate your reality from that of those around you.

Formatted as a four-panel newspaper strip, Borb tells the tale of a homeless man whose train wreck of a life spirals ever downward in humorous gag-strip fashion. Humiliated, debased and mistreated at virtually every turn, poor Borb highlights the problem of the homeless and our reactions to this problem and simultaneously, mercilessly makes fun of both.

Resembling something like a Captain Haddock gone completely to seed and off the rails, Borb perfectly embodies the horror of not being able to either afford or have access to the things we can and frequently do take for granted. Suffering broken limbs, destroyed teeth, lack of hygiene, zero affection and never being treated by anyone at any time with anything resembling common decency, poor Borb is of a class so far below us he’s, as Mitch noted, virtually invisible. Even when he is cared for, his treatment is frequently superficial, little more than a Band-Aid on the problem. The “temporary housing” he’s granted at one point is little better than some flophouse that should be earmarked for demolition. Its broken windows make it impossible to heat and once Borb cuddles up to his dodgy space heater, he accidentally burns the place to the ground.

This is one example of many “Oh Borb, you goof…whatever mischief will you get up to next?” moments as Borb splits his pants, shits in bags, accidentally drinks perfume and takes tumbles down subway staircases. Alcoholic, dyslexic and broke, Borb is frequently the object of both ridicule and mistrust. He embodies all the stereotypes of the homeless – including their unfortunate, yet understandable tendencies toward self-destruction – to reveal just how cruel our opinions, ignorance and ambivalence toward their plight actually is. He’s the “bum” as total caricature, but as you chuckle along, ever-sad as you do so, the joke slowly turns as Borb’s gags and pratfalls increase in severity and hopelessness and the despair ramps up.

What’s truly special about Borb, which is created partly in homage to Depression-era newspaper strips, is how the “comedy vagabond” archetype of such material slips away to reveal the horror and complete futility at the very heart of this character’s existence. He’s “Just some homes guy,” says an EMT tending to him says at one point and this is a refrain that echoes all the way through the work right up until its conclusion, when you realise there never is or has been humour in any of this.

Ultimately, Borb must himself bear some responsibility for his existence just as we all do. Jason Little squeezes in enough of his backstory to make this apparent. How you, as both human and reader (the best kind of human), react to this is perhaps the core of Little’s book. How big is your heart? When comes the point where you write a person off? Or damn them for their errors? Well, prepare to find out if you read this brilliant, relevant and utterly necessary piece of comics. 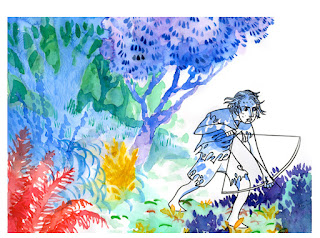 WEBCOMIC OF THE WEEK : HAUNTER
By Sam Alden

Sam Alden drops readers right into Haunter, a beautiful and exciting two-part webcomic published at the always top notch Study Group Comics site, giving us what ultimately amounts to little more than extended chase scene. But what a chase scene it is. A raggedly-clad female survivor of some disaster or other (one presumes) is on the hunt for a boar with nothing more than a simple bow and arrow, but ends up being stalked through the landscape by something seemingly ancient and supernatural.

Completely silent, Haunter is all about the landscapes – bizarre forests, odd temples, underwater caverns – the ever-versatile Alden’s remarkable linework and lush palate and the chase itself which reads like some uncommonly lovely backwoods survivalist horror movie gone quite surreal. Haunter is brisk, constantly moving and full of visual surprises. Devoid of backstory, much plot or any dialogue, Haunter is all about forward motion. Thrillingly climactic, it’s remarkable how much Alden will make you care for a protagonist you know little or nothing about other than the fact that she’s clearly quite the survivor.

While you’re there at Study Group Comics, have a virtual rummage around the place. The site is a complete embarrassment of riches. 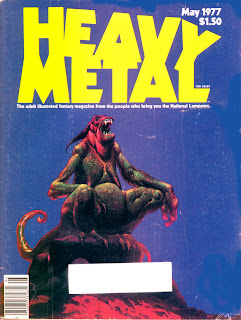 Did you know that not every man can handle Metaxa? I didn’t, but considering I had no idea what Metaxa is that’s probably to be expected. Clearly I am not man enough to imbibe this liquid, advertised in the second ever issue of Heavy Metal with a full pager featuring a spiked, gauntleted fist clutching a bottle of the stuff and thrusting it our faces, but a quick Google search reveals that Metaxa is a honey-flavoured Greek “amber spirit” (now drunk not by warriors but by handsome stubbly men, clearly not tested in battle, and their blonde sun-drenched women according to the website). Still, the fine print of this amazing ad tells me that it’s “84 proof Greek Specialty Liqueur,” so perhaps I’m writing it off to quickly. “Drunk by Gods and Warriors. And men who can handle it.” I’m up for the test…


Metaxa! The official hooch of Heavy Metal May ’77!

It’s quite the ad, but far from the most remarkable thing about this issue, which opens with my hero Jacques Tardi’s “MEAOBbBIN MECRU” (that is not a typo), a tale of sexy Russian cosmonauts that almost resembles a team-up between Gilbert Hernandez at his most absurdist and Guy Peellaert of Adventures of Jodelle fame. Remarkable.

Philippe Druillet’s astonishing “Agorn” follows, a stunningly weird slice of black and white dark fantasy in which the titular character, plagued by nightmares, has the love of his life cast to “the demons of the dark” by his family and their magician so he slaughters them all ruthlessly, in the process becoming damned “for thousands and thousands of years” by his actions, forever woken from sleep and forced to relive it all over again. Beautifully circular in structure and complex in layout, “Agorn” should be read several times in a loop to best appreciate the hell its doomed protagonist is trapped in.

“Den” and “Conquering Armies” continue masterfully, along with “Harzach” (Arzach) by Moebius, but it’s “Roger,” a Fumetti by Locquet and Souchu, that will likely turn the most heads for the new reader with its male action figure protagonist raging against Roger, the god-like being who plays with them as though they were “mass-produced dolls”.  Strikingly quirky and odd, “Roger” thankfully continues in several months time. Roll on August ’77!

As the intro to the issue says, “Other tales complete their time/space existence here before yr [yes, it says “yr”] very eyes,” but I’m out of room so let’s just say that the hallucinatory “Virgo” by Philippe "Caza" Cazamayou, featuring a naked woman partaking of the…um…seed…of a reptilian fruit that looks more like the head of Killer Croc’s appendage than something from the Garden of Eden and subsequently ends up pregnant with some sort of Godly planetoid, is worthy not for just its strangeness and stunning detail, but also as it could potentially be read as Lilith’s sexual encounter with Samael…

COMICS VIDEO OF THE WEEK : A CONTRACT WITH GOD: WILL EISNER

A million miles away from Borb in tone, style and intent are Will Eisner’s tenement stories, yet their depiction of the lower class packed into these classically New York buildings is no less striking. Incidentally, I’ve always felt that Eisner’s more “personal” works cast him in the role of something like comics’ Dickens, which upon reading the below once more is fairly fitting.

Anyway, here’s a really nicely made video of “A Contract With God”, one of Eisner’s most famous pieces. This 1978 story of a how the death of a loved one changes a once kindly Jewish man is perhaps a little heavy on the melodrama, but Eisner’s characters exhibit all the wonderful facial expression and body language that made him a master and just look at his architecture…*swoon.*

Cameron Ashley spends a lot of time writing comics and other things you’ll likely never read. He’s the chief editor and co-publisher of Crime Factory (www.thecrimefactory.com). You can reach him @cjamesashley on Twitter.
Posted by All Star Comics Team at 12:29 PM