ALL STAR RECOMMENDS FOR AUGUST 11TH


Urrghhh…the flu has struck down my household like some biblical plague, making reading strange comics stranger which would be nice if I didn’t constantly sneeze all over them.

Still, I have a replacement laptop (Codename: Oscar) and if you need a cheapie that goes like the clappers, I heartily endorse the HP Stream in manly gradients of blue… 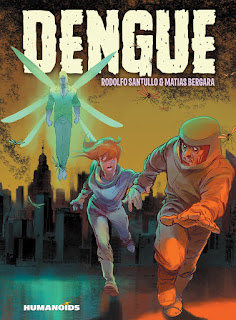 COMIC OF THE WEEK : DENGUE
By Rodolfo Santullo & Matias Bergara
Published by Humanoids

Oh, Humanoids. I’m sorry I’ve neglected your fine boutique Euro wares in this column, it’s just that there’s too much to say. Yes, I have columns planned on The Incal and Son of the Gun and Swords of Glass and many more, but I’m slightly intimated by what I know will end up being overly long pieces that bang on about existentialism and psychedelia and, really, we’ve all had about enough of that from me, I’m sure. Thankfully, however, there is the recently released Dengue to talk about, which at 96 pages is a book I can recommend promptly and earnestly without a word count blow-out and a rant about the heart of the universe.

“We get in out airtight suits and cars, with our stinking bug spray and we only go out when absolutely necessary. Yet we carry on regardless,” says main character Sergeant Pronzini and this is likely as good a summary of Dengue as you’ll find.

Thanks to Global Warming, Dengue fever is spreading and with it, the rise of the mosquito as the dominant lifeform on Montevideo, Uruguay. Humans are forced to either live sealed up tight in their homes or venture through the ruined city only in hazmat suits or risk becoming infected. There are piles of dead bodies and general apocalyptic ruin to prove this. Sergeant Pronzini is a grizzled, chain-smoking homicide cop who resembles a badly hungover Robert De Niro. The discovery of the naked, murdered body of a famous scientist working for the company that seeks a cure to the disease sees Pronzini thrust into a deep conspiracy, exposing corruption, greed and lies at the highest levels. Despite the heaviness of that synopsis, Dengue is, oddly enough, “Cli-Fi” (can you believe that’s a genre now?) at its most fun.

Thousands are dead or infected and the latest scientific discovery reveals that with three mosquito bites, the infected can mutate into something neither quite human nor insect. This development could be treated as something like The Fly, yet the satirical streak that runs through Santullo’s script, broken up into easily digestible chapters that at first seem loosely connected at best, makes Dengue an unexpectedly fun ride. From its mosquito monsters to its corporate irresponsibility to its haggard yet brave protagonist and his dogged truth-seeking reporter partner, Valeria Bonilla, Dengue packs a lot into its relatively brief page count, becoming quite the political page-turner in the process.

Bergara’sunique art will likely not blow you away at first glance. Far from the intricate, highly-detailed work we’re accustomed to from this publisher, Bergara is more of a caricaturist, with thick lines and big chins recalling the legendary Carlos Ezquerra somewhat. It’s likely this off-kilter sense of characterisation that creates much of Dengue’s mood, however, as imagining the pages with a more traditionally elegant and “beautiful” Euro comics look is a difficult task once the covers are closed. Bergara’s not the flashiest, but his pages flow wonderfully, his human characters are consistent and unique in appearance, particularly the dogged, slumped Pronzini, and his mosquito men are hulking, monstrous things like Un-Men from Swamp Thing.Both creators live in Montevideo (which I did not know going in) and this may also contribute to the seamlessness of their collaboration and the uniformity of their creative vision.

Brisk and compelling, Dengue is playful in tone, serious in subtext and, beginning as procedural and ending as the story of the uprising of a brand new underclass, is surprisingly epic for such a slender book. Part of me wanted more middle to the story, more outward growth from the crime solving that opens the book so strongly, but this is ultimately a minor complaint. Santullo and Bergara successfully deliver an offbeat, humorous and compelling take on an end of the world full of bugs, body horror and climate change, which is a far more difficult task than it probably sounds. 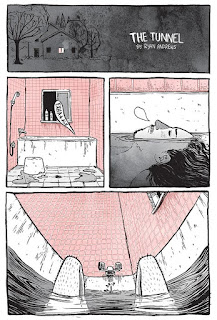 WEBCOMIC OF THE WEEK : THE TUNNEL
By Ryan Andrews

A man takes a relaxing bath and, in the process, discovers a tunnel that leads from his bathroom into the catacombs where thousands of creepy-crawlies nest. Strange, short and silent, this a cracking little webcomic for those with a few minutes to spare. In related news: I feel a lot like the guy in this comic right now. Urghhhhhhh. 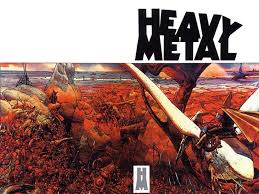 “Scour the countryside with your goons Skoor-Neg! We must find the girl KEETH-REN!”

But wait, the pulse-pounding excitement of Richard Corben’s lusty “Den” has me getting ahead of myself, for any magazine that opens with an advertisement for Supertramp is alright with me. In honour of that, let’s all pump up The Logical Song and get into Heavy Metal July 1977!

“Arzak concludes this issue,” says the editorial (the consistently cheeky tone of which is fast becoming quite endearing), “as does Sunspot. So you won’t have Vaughn Bode to kick around anymore.” That’s actually a relief as it was getting difficult to avoid talking about it.

As enraptured by the pyrotechnic adolescent fantasies of “Den” as I am, this issue of HM totally belongs to Moebius. There’s a bunch of Arzach here, along with a wraparound cover and collaboration with Philippe Druillet, “Approaching Centauri,” and part one of the now legendary “The Long Tomorrow” with Dan O’Bannon, writer of among many other things, Alien.

However, stoner boob objectification turns dull, stupid and eye-rollinglyunfunny in “Nep Simo” by Alain Voss, a kind of hippy Little Annie Fanny that clearly did not do much for me. More “Conquering Armies,” however, is greeted with a thumbs up and a reminder to self that I need to buy the hardback, full colour edition Humanoids released a couple of years back before it disappears forever, but it’s really the back end of this issue that’s supercharged, with the aforementioned “The Long Tomorrow,” “Crossroads of the Universe” by Enki Bilal and the final slice of “Arzak.”

“Crossroads…” sees Goran VIII, Galactic High Priest “trapped…on a pagan world” and tasked by his god (or, rather his superiors in god’s name) to slay a demon who continues to rematerialize and is in fact in the form of his own naked body. Bilal’s artwork is at it’s stunning, cross-hatchiest best in this strip, with its dark, rocky alien landscape and multiple moons stealing the spotlight from its conflicted, beardy,priestly protagonist.

But enough of this, all we really care about is “The Long Tomorrow,” right? Hatched after the failed attempt by director Alejandro Jodorowsky to bring Dune to the bring screen (as detailed in the marvellous Jodorowsky’s Dune), Jodo’s collaborators on that particular project, O’Bannon and Moebius didn’t let the film’s failure get them down for too long. An SF/noir/spy mash-up, “…Tomorrow” features hardboiled PI, Pete Club who’s hired by upper class “dame” Dolly Van de Katterbar to retrieve a mysterious package from a sub-station locker. Of course, Dolly winds up dead, Pete is shot at and a plot involving a stolen brain is kicked off.

Totally bonkers and, honestly, not terribly memorable in terms of story, it goes without saying that Moebius produces pages worth lingering over.

Ain’t they the best? Do they happen anymore with any regularity? If not, it’s likely because everyone’s seen this 12 minute video in which Moebius and Hugo Pratt throw down on a gigantic sheet of paper with little more than thick black markers and make such magic that few these days dare follow.

In any event, perhaps it’s the cold I’m afflicted with as I type this, but this is an utterly hypnotic piece of film, featuring two of the all-time greats having fun and creating some absolute magic. Watch and remember: somewhere out there, someone owns this piece of paper with both Corto Maltese and Blueberry as drawn by their respective creators. I’ll do my best not to flood this section of the column with more Tac au Tac videos from this period, but really would you blame me if I did?

Cameron Ashley spends a lot of time writing comics and other things you’ll likely never read. He’s the chief editor and co-publisher of Crime Factory (www.thecrimefactory.com). You can reach him @cjamesashley on Twitter.
Posted by All Star Comics Team at 2:30 PM