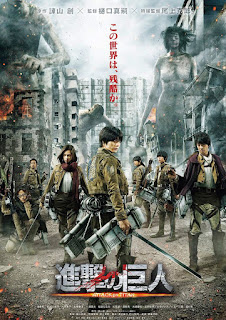 Japan, present day. The sudden arrival of the Titans—mysterious, gigantic humanoid creatures who devour human beings one after the other—brings mankind to the brink of extinction. Fast-forward more than 100 years later. What remains of the human population now live in relative peace behind massive walls that were erected to defend themselves against the Titans. Yet once again, that peace is shattered when a Titan measuring over 50 meters tall smashes through the wall, allowing a horde of other Titans to enter.

Our hero, Eren, had been resigned to a life confined behind these walls. “Nothing I do would make a difference”, he ponders. But when he joins the ‘Outer Wall Restoration Team’ set up to fight against the Titans, he is reunited with Mikasa, a childhood friend and someone he had long regretted not being able to save. The new recruits embark on a mission to obtain explosives, which had become rare and precious, before getting past the waves of Titans to plug the gaping hole in the wall, with humanity’s survival on the line. Will there be a future for Eren and Mikasa, and for mankind itself?


Thanks to those massively awesome folks from the Cinema Nova and Attack On Titan, starting a limited release season from 27th of August, we have 5 Double Passes to the Thursday, 27 August, 8:40pm session at Cinema Nova to give away.

To go into the draw for your chance to win all you need to do is tell us, "there are a few different classes of Titans, some with unique abilities, all of them creepy. What type of Titan would you be?" Feel free to create your own class and type of Titan.

Being a limited release season, click HERE if you want to check for other session times.

Again a HUGE thanks to Cinema Nova and Attack On Titan, starting a limited release from 27th of August.