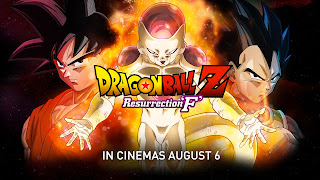 Hot on the heels of last year's summer blockbuster, Battle of Gods, Dragon Ball Z is back in theaters. Dragon Ball Z: Resurrection "F" is the second film personally supervised by the series creator himself, Akira Toriyama. The new movie showcases the return of Frieza - one of the most iconic villains of all time.

Even the complete obliteration of his physical form can't stop the galaxy's most evil overlord. After years in spiritual purgatory, Frieza has been resurrected and plans to take his revenge on the Z-Fighters of Earth. Facing off against Frieza's powerful new form, and his army of 1,000 soldiers, Goku and Vegeta must reach new levels of strength in order to protect Earth from their vengeful nemesis.


Thanks to those Power level 150,000,000 guys from Madman and Dragonball Z Resurrection F, in cinemas from August 6th, we have six single passes to the film to give away.

SPECIAL NOTE: This is a limited cinema release. Cinemas playing and screening times for this film can be found HERE.

To go into the draw for your chance to win all you need to do is tell us, "What would your special fighting move be called and how would you say it when using it in battle?"

Terms and Conditions:
Only entries made via the the comments on the Facebook post will be included in the draw.
All entries will go into the All Star Barrel and winners will be drawn at random.
Entries close 5pm Sunday the 9th of August and winners will be announced Monday the 10th.
Tickets will only be available to pick up from the store and winner must produce photo ID upon pick up. Tickets MUST be picked up no later than a two days after the draw. Any remaining tickets after this date will be given away at our discretion to make sure they don't go to waste.

A huge thanks again to Madman and Dragonball Z Resurrection F, in cinemas from August 6th
Posted by All Star Comics Team at 10:23 AM