ALL STAR RECOMMENDS FOR AUGUST 4TH 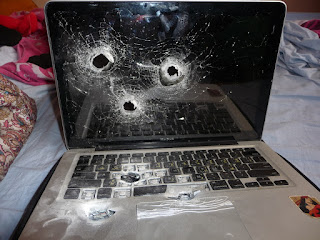 Hi there, readers of my inane waffle…

Due to international houseguests, encroaching illness, the death of my beloved Samsung Q330 laptop and his hastily purchased replacement turning out to be a lump of useless plastic and circuitry, this week’s column is a bit of a roughly cobbled together effort. Sorry, I’ll be back in full swing next week. 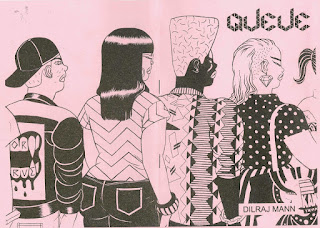 COMIC OF THE WEEK : QUEUE
By Dilraj Mann
Self-published

Well, phew. If there’s one thing it’s nice to not have to worry about anymore, it’s a lack of fashion in comics. This might sound incredibly superficial and not at all important, but I would disagree – for far too long, comics (specifically mainstream comics) have suffered a drought of artists who actually drew people (specifically teenaged people) who looked cool, relevant, and up-to-the-minute with their couture instead of pleated-pants wearing weirdos who tend to emulate the fashions of their talented but not particularly worldly middle-aged artists.

A bit harsh, perhaps, but open up Ultimate Spider-Man #1, as Exhibit A. No, this was not the product of 1985, it was actually the year 2000 not that you’d know it from Mark Bagley’s costuming of all his characters, most egregiously Harry Osborne. Poor Harry looked, even on the day of publication, like he just came off a stint as an extra in Less Than Zero.

This welcome turn-around in comics fashion largely has to do with the influx of younger and notably female creators to the medium, like the Lumberjanes crew and Babs Tarr and Jillian Tamaki and so many others. Not to be outdone, guys like Jamie McKelvie, Simon Gane and again many more have demonstrated a serious level of care and attention to what their characters actually wear and how they style themselves. And here’s another male artist to watch, England’s Dilraj Mann.

Mann’s zine, Queue arrived in my mail this week and it is a wonder of both style and substance wrapped up in sexy risographed printing. Four characters wait in line outside to meet a club. They are strangers. However, each of them is connected in some way to Delilah, a fleshy, sexy but very confused girl burying the pain of a break-up through all manner of partying and their accoutrements.

It’s worth noting that Mann clearly celebrates the female form the way Crumb does – he’s all curves and asses and flesh; these are seriously embodied chicks, not the waifish stick-figures of the catwalk world. Full figured, even fuller-lipped, gap-toothed and cat-eyed, Mann’s characters are yet packed with a bizarre sensuousness.

Although resembling something like Brandon Graham and Dave Cooper drawing Nightclubbing kids, Queue is more than just cute characters and their marvelous wardrobes – structurally ambitious, it constantly cuts between Friday night at the club and earlier in the week to show us a glimpse of each character’s interactions with Delilah. Mann’s page layouts are superb, confident and ambitious. Of particular note are three club-set pages where Delilah pops some pills and dances. Mann slows things down and speeds them up amazingly, chopping his panels up like coke lines, forcing his readers to scan through as if viewing the sequence through a strobe light, while at the same time moving events of the night around like chess pieces.

Here’s but one of them: 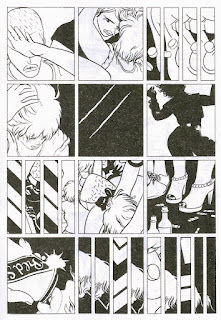 You can pick Queue up at Mann’s site and while you’re there, take a look at some of his prints and original art – it’s gorgeous, striking stuff. 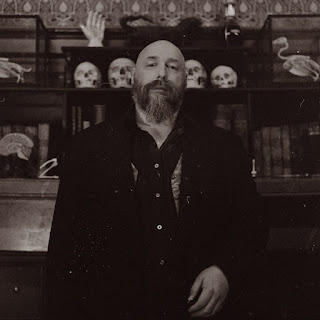 WEBCOMIC OF THE WEEK : WARREN ELLIS: “READ COMICS. ALL THE COMICS. THEN CUT THEM OPEN…”

No webcomic this week, see poor-me intro, but I might just have something better. Thanks to Tom Spurgeon’s The Comics Reporter, I stumbled upon this excerpt from a recent Orbital Operations newsletter from Warren Ellis and posted at Down the Tubes. I read Operations religiously, like it’s a personal letter just to me which I know is ridiculous but I’m not feeling well so go away.

Here’s Ellis describing the importance of conducting your own creative autopsy on comics. All comics. Not just the ones on your pull list. 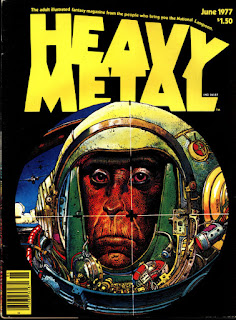 “They were made of metal and hate. On the gigantic planet Gail they raised their arrogant architecture toward heaven and their eyes, as brilliant as those of wild beasts, towards the night.”

All hail Philippe Druillet, who kicks of this third issue of Heavy Metal with part one of “Gail,” a tale about an off-world prison colony called Saint Mary of The Angels,” where criminals and political prisoners alike find themselves shipped daily. Druillet’s ridiculously spiky space ships and generally bleak industrial-gothic SF designs are on full display here as a prisoner named Christmas the Stranger is transported to “the prison in the stars.” Magnificent stuff.

“Conquering Armies” by Jean-Pierre Dionnet and Jean-Claude Gal continues yet again with what is, for my money, its strongest chapter yet, with its sentry protagonist eating cockroaches amidst the field of the slaughtered dead. “Rockblitz” by Sergio Macedo brings us a super cool grey toned airbrush effect, future gangs, robots, rock and roll and a majestic three-horned saxophone. The mighty Richard Corben pulls double duty as first, Den rescues a damsel, then he and Frank Frazetta provide splash illustrations to accompany several pages of Robert E. Howard verse. Amazing. Tardi is back again with his cracking post-colonial SF short, “Fear of The Blue-Eyed Sloane!” (Seriously will somebody please collect Tardi’s shorts?) and Moebius’ “Arzack” (Arzach) continues in all its wordless majesty. Two noteworthy additions are “Vengeance” by Dominique Vallet, an elegantly-illustrated piece about a man carrying out his justly-sought revenge against a sorcerous, somewhat sentient wall and “Shells” by Francois and Luc Schuiten, a pretty sensuous and striking piece with an almost EC-like twist about an armoured man and woman deciding to cast off their exoskeletons to satiate their fleshy desires.

Got two hours free? Love DeConnick, Fraction and their assembled crew? Boy, do I have the video for you. Enjoy.

Cameron Ashley spends a lot of time writing comics and other things you’ll likely never read. He’s the chief editor and co-publisher of Crime Factory (www.thecrimefactory.com). You can reach him @cjamesashley on Twitter.
Posted by All Star Comics Team at 2:57 PM