ALL STAR RECOMMENDS FOR SEPTEMBER 29TH 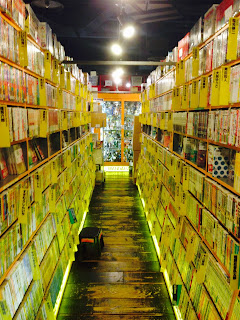 Hello! Oh, what a trip to Japan I had…I honestly don’t know where to start or even if I should start because I might not ever stop. I’ve returned with so much manga and so much up to date info about where to visit and shop for comics (quick tip: always go second hand, unless you’re in shops called Village Vanguard or Taco-Che) that I think maybe the best thing for me to do would be to take some time and put together a shop/place of interest listing. We’ll see. I have to admit that it was a little disheartening to see the ever-depleting piles of weekly manga shrinking even further from my last visit. However, there does appear to be a fair bit of digital manga – one guy on the train was reading some kind of motion comic version of Slam Dunk, which with its endless panning did not appeal at all to this particular gaijin reading over his shoulder. Although still viable and thriving, the market seems tougher than ever, I’ll say that much.

I’ll write about a few artistic discoveries I made as well as some newer works by amazing non-translated creators and older works by some now sadly no longer with us over the next few weeks, but as I battle the Being Home Blues right now I’ll just quickly point out that I Am A Hero by Kengo Hanazawa is coming next April from Dark Horse (don’t tell me I didn’t warn you in advance!) and it is not to be missed. I’ve “read” the first 500 or so pages of this Zombies-in-Japan epic (roughly the first Dark Horse omnibus edition I’m guessing) and while it is a slow burn, once the zombies show up they don’t stop coming. Hanazawa’s fond of playing out big shocks over sequences of stunning and numerous widescreen double-page spreads that only the expansiveness of manga can allow. His artwork is intricate and fluid and his zombies are utterly disgusting. Give it a shot. 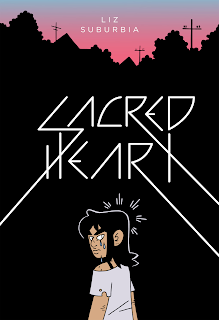 COMIC OF THE WEEK : SACRED HEART
By Liz Suburbia
Published By Fantagraphics

What a year 2015 has been in terms of quality comics – at this point my Best Of “shortlist” is roughly the length of All Star’s weekly Diamond shipping invoice. Joining a crowded field of contenders is Liz Suburbia’s Sacred Heart, the first book in a projected four-volume series from the Virginia-based cartoonist and published by the fine folks at Fantagraphics.

Years ago, all the adults disappeared from the town of Alexandria, leaving the kids to carry on in their absence. On the whole, this cast of teenaged punks, nerds and jocks, navigating the minefields of their surging hormones, the complexity of their inter-personal relationships and the responsibility of raising younger siblings, does incredibly well without any grown-ups to guide them. It’s not all punk rock parties and young love, however. An apocalyptic vibe hangs over Alexandria, with the kids well aware of what’s happened to their parents, an odd religious undercurrent and, much more ominously, murders committed on their suburban streets.

Ben Schiller is one of Alexandria’s teens. She’s got a crush on a handsome football player with his own secrets, an increasingly complicated relationship with her best friend Otto and a sister named Empathy who she worries about constantly. Sacred Heart is seen predominantly through Ben’s eyes and Suburbia expertly dilutes the high concept nature of Sacred Heart’s premise with beautiful moments of both character interaction and the continuing banality of everyday existence. Even in this most unusual of circumstances, the young characters struggle to keep on keeping on as time marches onward and more of their peers are killed.

Suburbia’s cartooning is just lovely, with her punk rock kids, starkly contrasting black and white and even her lettering recalling Jaime Hernandez by way of Brandon Graham’s full-lipped, rounded figures of all sizes and shapes. Her layouts are superb and her manipulation of comics space-time is a highlight. Her montage pages are exceptional, widening out her “lens” to cover a large portion of her cast in single-panel, everyday moments, creating breadth and scope within her world and yet also intimacy. Each of her characters is distinctive and whole, with his or her mannerisms and psychological concerns and, although it does not affect the narrative at all, the social order of High School intriguingly remains very much intact even though classes are no longer in session.

Sacred Heart is difficult to discuss without spoiling. It’s a comic that cares more about its characters than pushing its plot (the major story reveal is literally on the very last page, so don’t flip to the end if you are perusing a copy) but with Suburbia’s teens talking and interacting like actual teens, the complete banishment of exposition is actually one of the book’s great strengths. Its surprising subtlety and ambiguity means that much is left unexplained or to the reader to decode and further mysteries are revealed as existing ones tie up. However, Sacred Heart is created with such a sure hand that there’s no doubt Suburbia knows where she’s headed and how she’s going to get there.

Sacred Heart is, at over 300 pages, a complex, thrilling and lovingly created graphic novel that deserves not only a massive teen audience but also one way beyond the confines of that demographic.

WEBCOMIC OF THE WEEK : MY DOG: THE PARADOX
By Matthew Inman

Dogs. You love them. I love them. I’m really short on time this week, so here’s another touching comic about them from The Oatmeal by Matthew Inman. 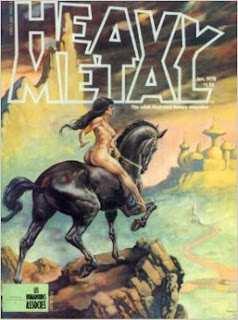 Rebounding from the last lacklustre issue like Rocky in pretty much all of the Rocky movies, Heavy Metal’s January 1978 issue is a smash. The editorial is again, tremendous, with our unnamed scribe reinforcing the magazine’s commitment to European material in the face of letters (one of which is printed in this issue) from “…American hewers of wood nymphs and water babies [who] feel our usual three to one ratio is downright unpatriotic.”

Great stuff. One can only imagine the submissions that HM received from American would-be Moebiuses and Druillettes of the time and indeed a rummage through the blind submissions pile would be on my comic book Time Machine To-Do list.

Corben’s “Den”continues ever on, as does Moebius’ “Airtight Garage” with Jerry Cornelius himself making his first (I believe) comic book appearance.“A Rose For Ecclesiastes,” a prose story by Roger Zelazny accompanied by illustrations by the legendary Gray Morrow proves much more satisfying than last issues hot mess by Len Wein accompanied by a game Howard Chaykin. Morrow’s full-colour drawings surround the text completely on each page (almost, I must confess, to the point of confusion on a couple of pages), dating the piece but wonderfully so, for nobody really draws like this anymore. Certainly nobody colours and shades with pencil like this anymore.

There’s more of Chantal Montellier’s savage deconstruction of male culture in “1996” (although the end to this two-parter is something of a disappointment after such an excellent set up), “Conquering Armies” concludes darkly and utterly gorgeously (I will be featuring the remastered Humanoids edition of this story, Armies, sometime soon. Hot tip: order and purchase this before it’s out of print) and “Talapalca” by Dominique He presents an SF twist on a real Incan legend, gorgeously drawn in a highly-detailed style that verges on pointillism at times.

The utter star of the show however, is the opening chapter of “Ulysses” by Jacques Lob and Georges Pichard. A psychedelic take on Homer’s epic (with the poet himself aboard Ulysses’ ship The Penelope), synchronicity rears its all-knowing head once again as your humble reviewer not long ago finished volume one of Fraction and Ward’s Ody-C but is also in the middle of David Gemmell’s trilogy of novels that tackle this very material but strip the myth from it, humanising it – great books all.

Lob you may know as the writer of Snowpiercer, but it’s Pichard’s art recalling the design-oriented, ‘60s stylings of Guy Peellaert with the bodacious curves of John Buscema’s sultry vixens that’s the stand out. In short: this is wonderful. I’ve read it in its entirety several times before and if I had more time on my hands, I’d write an essay on this and Ody-C and how myth and psychedelia intertwine so lovingly.

If I played it too safe for your tastes in my review of Sacred Heart, here’s the humble and charming Liz Suburbia herself, via the wonders of the interwebs, having a chat with readers at San Francisco’s Comics Experience store.

Extremely forthcoming about her process, the struggles of creating comics and working full-time, the editing of Sacred Heart, the re-creation of pages, the backstory of her planned epic and where it will lead, it’s a great chat even if the audio gets a touch swampy at times.

Be warned: here be SPOILERS. Lots and lots and lots of them, so if you don’t like that sort of thing, please do read the book first – your reading experience will be much richer for it.

Cameron Ashley spends a lot of time writing comics and other things you’ll likely never read. He’s the chief editor and co-publisher of Crime Factory (www.thecrimefactory.com). You can reach him @cjamesashley on Twitter.
Posted by All Star Comics Team at 12:21 PM