ALL STAR RECOMMENDS FOR JUNE 23RD 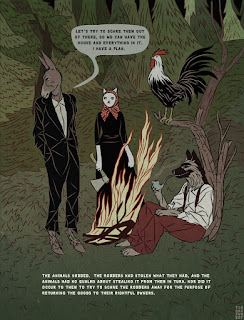 Hi. My dog is on my lap.  It is very difficult to type like this…

If I have my dates right, this coming weekend should be Oz Comic Con Melbourne, and if you click that link and scroll down past the actors and voice actors and cosplay guests, you will find real life actual comics people attending a comics convention. Astounding, I know. Anyway, one of those comics-related-at-comic-con attendees will be Melbourne’s own Tristan Jones, who enjoyed a major milestone last week with the release of Mad Max: Fury Road: Furiosa (so: many: colons!)  in which he drew the adventures of everyone’s favourite Imperator. As there will likely be no pop culture figure as prominent this year as Furiosa you should go say hi and congratulate him on this massive achievement.

Also, as briefly mentioned last week, We Are Going To Bremen To Be Musicians rounded out my TCAF reading.  Written by Geoff Berner and illustrated and published by Tin Can Forest (Canadians Pat Shewchuk and Marek Colek) …Musicians is a beautiful retelling of the Grimm Brothers folktale, The Town Musicians of Bremen, in which an ageing donkey, dog, cat and rooster flee murder at the hands of their respective owners and, on a whim and with no prior experience, head to Bremen with the goal of becoming professional musicians. “Where did the idea come from?” the narration asks us, “No one knows. Where do donkeys usually get their ideas?”

…Musicians is a gorgeous looking and designed book, a hybrid of illustrated storybook and comics, with Tin Can Forest’s sumptuous art, inspired by “forests of Canada, Slavic art, and occult folklore,” difficult to pull your eyes away from. Keen not to be left behind by his collaborators, Berner’s writing bouncily carries the tale along, with plenty of whimsy and a fair bit of sass and the overall effect is one of total dreaminess – perfect for such a story. It’s available through the Tin Can Forest site and, really, I can’t say enough good things about it. 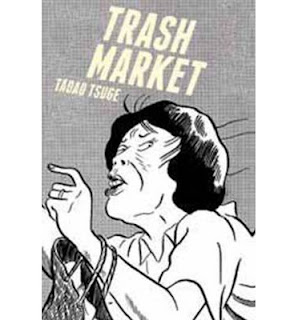 COMIC OF THE WEEK : TRASH MARKET
By Tadao Tsuge
Published by Drawn & Quarterly

From the darkest, most unlikely corners of post-war Japan, various pieces of lost, discarded, broken and destructive humanity have a light shone on their daily struggles in Tadao Tsuge’s Trash Market.  Edited and translated by Ryan Holmberg, Tsuge’s work gets its first, long overdue, English language collection. For six stories created between 1968 and 1972, Trash Market feels remarkably modern, exemplifying the seriousness and artistic progressiveness of much Gekiga (or “dramatic pictures”) of the period which, finally, western audiences can enjoy in ever increasing quantities thanks largely to publisher Drawn and Quarterly’s efforts.

Encountering early Gekiga is like cracking open a particularly evocative time capsule, enabling readers to transport themselves to a Japan struggling to reshape itself into something new, wrestling inter-generationally as westernisation creeps in and the strange split-personality (existing to this day) of a country existing in both past and present became readily apparent. As such, the book is high on melancholy and real-world darkness. In Tsuge’s work, Holmberg writes, “one finds male characters beset by anomie, festering resentment, traumatic memories and unspeakable guilt of the war.” They are the trash of the new Japan, these men, the waste of the old, as bombed down and destroyed as the streets of Tokyo’s “low city” (shitamachi) in which they are forced to live.

The thoroughly contemporary feel to Tsuge’s story structure would seem to spring from his process as much as the modern translation. As described by Holmberg: “He begins drawing with only a rough beginning, middle and end in mind, with no script or breakdowns.” This method of comics creation, likely terrifying to any western comic book editor, lends Tsuge’s work a highly literary short story structure, presenting snippets of lives dependant not necessarily on plot or action but simply on existence itself.  The work of Tsuge and his contemporaries (particularly that of Yoshihiro Tatsumi – please do seek out his Abandon The Old in Tokyo, The Push Cart Man and Other Stories and Good-Bye) have the feel of Dirty Realism about them, easily thirty years before this term was created to define a style of American writing. For Tsuge’s characters, there is no escape from this world, no pivot points in their stories, no respite. There is simply daily existence, a fraction of which we are invited to witness and much of it Tsuge himself experienced in his surprisingly colourful life.

In “Song of Showa,” young Tomeo (based on Tsuge if the essays at book’s end are any indication) witnesses frequent domestic violence and family turmoil. Crammed into a tiny abode, Tomeo’s mother struggles to keep the family together amidst poverty (Tomeo’s two brothers are not being paid for their work), mental illness (Tomeo’s father is violent, traumatised and receives the best of the family’s meals) and the values of old Japan (Tomeo’s Grandfather is violent and cruel, resenting his daughter, his son in law and grandsons). The streets are filled with criminals and prostitutes, yet young Tomeo is still able to snatch some joy from the activity and colour surrounding him despite the misery of his daily life. “Song of Showa” is both a heartbreaking story, refusing to allow Tomeo any respite, and an evocative portrait of “low city” existence.

The titular “Trash Market” is the longest story in the volume and is also clearly drawn from Tsuge’s life. One of numerous odd jobs Tsuge took to support himself during lean times was at a blood bank, where cash was paid to blood donors and hygiene appears to have not been an utmost priority to staff. In fact, Tsuge contracted hepatitis during his stint working at the blood bank, for which he’s treated for to this very day.

“Trash Market” finds a group of petty criminals, Navy vets, former tutors, labourers and burn-outs of all sorts queuing at a blood bank to donate their blood for cash. They pass the time and attempt to ignore the stifling heat by swapping lewd tales of sexual encounters that may or may not be factual, insulting one another and generally keeping each other amused any way they can. Many of these characters have clearly made an occupation out of their visits to the bank, becoming, in essence, professional donors.The interactions of those awaiting their turn is the sole focus of the story and, aside from a brief sequence inside the blood bank itself where a donor flirts with a nurse, the exterior is the story’s sole location.

“Trash Market” is a portrait of those brought low by circumstance and poverty, yet who are able to find humour and warmth in each other’s company. You’ll probably feel like you’re there amongst them, cringing at their jokes and wincing at their actions. All are equal at the blood bank – the tutor, the labourer and everyone in between. A camaraderie borne of equality at the lowest rung of the class ladder exists amongst this misfit crew, and each ekes out as much very literal blood money as health and regulation will allow.

With four more stories of equal merit and fascinating supplementary material included,Trash Market is highly recommended for readers with an interest not just in Japan, but also for those interested in structure and the thoroughly Literary possibilities of the form. It’s also a powerful depiction of a fascinating time in a most fascinating country. Hopefully, further volumes compiling the work of Tsuge’s offbeat social realist are forthcoming. His work does not make for the most superficially enjoyable trip to Comics Japan you’ll ever take, but definitely one of the more eye opening. 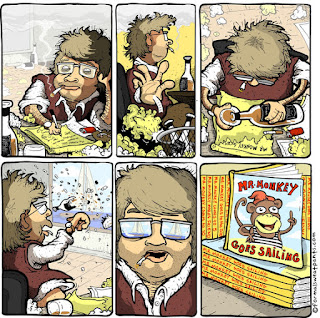 WEBCOMIC OF THE WEEK : FORMAL SWEATPANTS
By Josh Mecouch

For a weekly webcomic featuring short, standalone gag strips, the “funny ha-ha” strike rate of Formal Sweatpants is remarkably high. Mad contributor Josh Mecouch has a warped sense of humour and a healthy streak of goofiness that populates his comics along with thickly-lined, frequently grotesque animal, vegetable and human characters.

Highlights include “Gerard,”“Little Baby Carrot,” “Halloween Party” and “Spider Web” but really, you can’t go too far wrong here. Start with Popular Pants, work your way through and then hit Random. You’ll find it pretty easy to tear through the site’s content and even at its worst it’s still odds on you’ll at least get a smile. As I’ve mentioned before, gag strips are incredibly difficult to pull off regularly but Mecouch may well disagree – there’s an amazing amount of humour packed into Formal Sweatpants and, all in all, he makes it look pretty easy.

COMICS VIDEO OF THE WEEK : INKSTUDS WITH BRANDON GRAHAM

Brandon Graham draws a raccoon in a car. I think that’s all you need to know.

Cameron Ashley spends a lot of time writing comics and other things you’ll likely never read. He’s the chief editor and co-publisher of Crime Factory (www.thecrimefactory.com). You can reach him @cjamesashley on Twitter.
Posted by All Star Comics Team at 11:36 AM