ALL STAR RECOMMENDS FOR JUNE 30TH 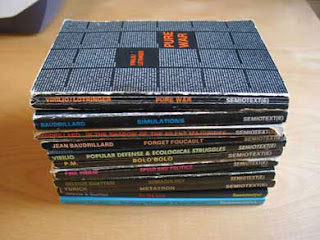 Let’s talk book-books for a moment. Skip ahead to the sequentials if you like.

Here’s a hot tip for all writerly, left-leaning, philosophically-inclined comics readers out there: the most important and creatively-influential non-fiction books you should be reading are published by Semiotext(e). Their catalogue has influenced the recent work of writers like Warren Ellis, Ales Kot and novelist Jeff VanderMeer, whose Area X trilogy of books, all released last year, need to be smashed into your brain ASAP. With Semiotext(e), start with The Coming Insurrection, head into The Administration of Fear and then pick at random as you will (The Soul At Work or Where Art Belongs would be my choice). Your mind will split open like a flowering
orchid.

I shouldn’t drink and write these intros…. 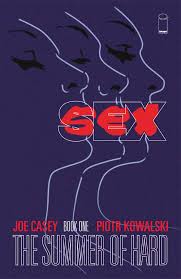 I can’t remember where I read this, but during his 2000-2002 run writing Detective Comics, Greg Rucka commented that the biggest problem he had in plotting the series was coming up with things for Batman to actually do. Bruce Wayne was never a problem for the writer, which likely explains the “Bruce Wayne: Fugitive” storyline of the period. Joe Casey and Piotr Kowlaski’s Sex takes this idea of featuring the man behind the mask (or the mask behind the man, depending on your view of which is which) and runs with it, giving us The Armored Saint, a superhero who has swapped his costumed adventures for corporate drudgery and, as a result, is forced to come to terms with both his own sexual repression and the very nature of his masculinity and identity. It’s very much, at least in its beginnings, a kinky Bruce Wayne in retirement book.

Despite Sex featuring a Batman-analogue of sorts, it’s perhaps worth noting that obviously Batman himself is not sexless. Whether he’s portrayed as the “hairy chest love god” as Grant Morrison once proclaimed, or the monogamous, but still very sexual, “Boyfriend Bruce” or being forced to conceive a child with the daughter of one of his most dangerous enemies, or being accused by real-world psychiatrists of inappropriate relations with his teen sidekick, or hilariously getting it on with Catwoman in cringe worthy early New 52 books, Bruce’s/Batman’s sexuality has always been apparent, if widely debated and largely off-panel. The bottom line, however, is that Batman doesn’t need to exclusively unbuckle his utility belt to have a good time. Bruce Wayne has long served as a strong sexual outlet for both personas.

Armoured Saint is a different story. He is the ‘80s revisionist superhero as dysfunctional celibate, his relationship with Sex’s Catwoman stand-in, Shadow Lynx, contextualised by intimacy of their rooftop chases and endless duels. His sexuality is expressed solely through the costumed adventures his alter ego had neither the time nor the inclination for.

Fittingly, Saturn City rises around our repressed hero in tight gleaming skyscraper-clusters of steel and glass, blatantly and obviously phallic (yet I can’t find any mention of this in other reviews I’ve read: Calling Dr Freud!), stretching off until the horizon and frequently framed in a worms-eye shot thrusting up to the sky. Seemingly an entire territory of high-rises, Simon, glum and completely unsure of his next step, has stripped himself of his own context within the city and is crisply dawn by Kowlaski in his designer suits struggling to find his new outlet amongst all the rigid towers surrounding him. Initially he appears completely unarousable, moping around high class restaurants, brothels and clubs, at one point watching two female sex workers go at it with such aloofness, one of the offended performers curtly asks if he’s going to start wanking any time soon.

The characters themselves are wonderfully brought to life by Kowalski, whose grounded art features slender, long-limbed characters coated with a slick porn sheen, groomed and proportioned like youthful adult film stars. It’s all luridly coloured by Brad Simpson who gives an ‘80s comic palette a strikingly sleazy overhaul, making images pop off the page like an dirty mag photographed in the overexposed “Vibra-tone” so fetishised by collectors of old filth rags. If that description makes little sense to you, think of Sexassomething like a Nicholas Wendig-Refn film (like Drive) paired with the overly dialogued verbosity of an ‘80s Marvel comic.

Casey is adept at tailoring his stories to their particularly tweaked eras – he’s as at home recreating the alliterative hyperbole of ‘60s-‘70s cosmic comics (seen most notably in his and Tom Scioli’sexcellent Godland) as he is in Sex, where characters are unaware that that the medium has moved on from 1987 without them and word balloons of under thirty-five words are now the norm. If the eighties was the grim ‘n gritty revisionist hero party, Casey makes Sex the grubby, mid-week bad-ecstasy comedown.

Despite the screwing on display, however, it’s hard to imagine anyone actually finding the book arousing. Characters screw as though frozen in time, clinical and posed, voyeuristically photo-snapped, the acts unappealing in their sculptured porniness. Contrast this with, say, the sex in a Gilbert Hernandez comic (whose work is an admitted, if surprising, influence on Casey’s creation of Sex), where generously proportioned characters have at it in all manner of combinations with passion, gusto and, most importantly, motion. Despite the cartooniness of Herdandez’s art in contrast to Kowalski’s, his depictions of sex appear far more human. Kowlaski’s characters, for the most part (there are notable exceptions -- Shadow Lynx and the Robin-esque ex-sidekick Keenan being the most prominent), do it with all the energy, spontaneity and authenticity of Kim Kardashian’s famously dull tape. I suspect this is likely the point. Either way, happy stylistic accident or aesthetic choice, it’s genius.

Clearly, there’s a lot going on in Sex. I’ve barely mentioned any plot at all, of which there is ample, and subtextually it doesn’t end with the revisionist super-sexual exploration. All the characters, heroes and villains alike, are attempting to move on in a seemingly post-superhero world, each with their own kinks and proclivities and each with their own plans. Different readings of the book seem bottomless – the end of heroes in the current rise of Indie SF. The struggles of corporate comics to remain relevant and diverse whilst meeting the most basic needs of monetary survival, it’s all here and for an excellent reading of Sex as Casey’s exploration of his own possible mid-career crisis, check out Luke Geddes’ excellent review at tcj.com.

Sex is a dense, fascinating and lurid read, a comic that doesn’t get anywhere near the attention it deserves. Don’t be fooled by its titillating title, eye-catching and sales-driven in its upfront salaciousness, because Sex is truly a complex piece of comic book business. Three collected editions are currently out, and the world-building and ever-expanding plotlines consistently surprise. To put it bluntly, Sex is good. Really good. Go have some. 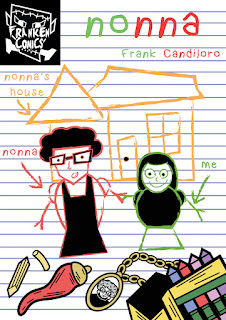 WEBCOMIC OF THE WEEK : NONNA
By Frank Candiloro

Melbourne comics creator Frank Candiloro’s Nonna is coming to print next month but, lucky us, he’s put the whole thing up online first. Huzzah. Over the space of 23 silent pages, Candiloro creates a very real relationship between a little girl and her grandmother and then quite neatly and compassionately explores the grieving process after Nonna’s sudden passing. There are some lovely, clever little visual beats and repeating panels that emphasise just how much Nonna’s absence weighs on the girl as well as the importance of the time they spent together and Candiloro makes the absolute most of the room he’s allowed himself for this project.

Candiloro’s cartooning is simple but detail-filled (his depiction of Brunswick is just spot on) and his adorable characterisation may well cause you to overlook just how skillfully he’s created a narrative about grief. While it may be a little odd to call a story about death “heart-warming,” Nonna is exactly that. Thematically resonant, structurally perfect, super nice to look at and, yes, heart-warming, I look forward to seeing what Nonna looks like once printed. Great stuff, Frank.


COMICS VIDEO OF THE WEEK : THE KING OF COMICS: JACK KIRBY
“He didn’t even want to ink his own work because that wasn’t involved with storytelling,” says Mark Evanier in the first minute of this short little documentary on the titan that was Jack Kirby. What a shame. So many pages marred by sub-par inking, slapdash, let’s-just-erase-this-detail by many who could simply not keep up with the Kirby’s energy, craft and desire to hit that deadline (Joe Sinnott and Mike Royer being notable exceptions to this).

This is a wonderful little two-parter but, like anything on Kirby, it breaks my heart a little.

Cameron Ashley spends a lot of time writing comics and other things you’ll likely never read. He’s the chief editor and co-publisher of Crime Factory (www.thecrimefactory.com). You can reach him @cjamesashley on Twitter.
Posted by All Star Comics Team at 9:53 AM