ALL STAR RECOMMENDS FOR JUNE 9TH 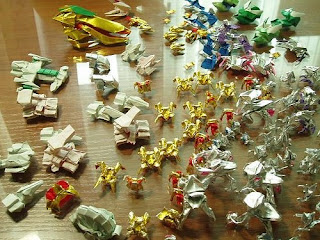 My week was long on drudgery, short on comics, which is the worst kind of week when you think about it. Here’s hoping yours had more four-colour magic in it than mine. The good news is I found four pages of crumpled notes for a silent story set in an “origami battle bar” I drunkenly scrawled down in a pub one day probably five years ago and it’s actually relatively legible and not unamusing. If anyone out there has some time and a lot of inclination to draw it, gimme a yell and I’ll write it up all proper-like. Yep, I’ll take my triumphs where I can this week – scrunched up at the bottom of my bag… 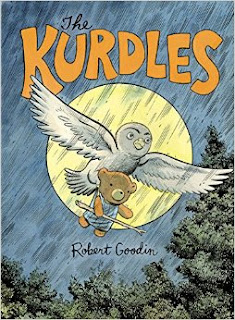 COMIC OF THE WEEK : THE KURDLES
By Robert Goodin
Published by Fantagraphics

If you’re perhaps slightly overwhelmed and mind-clogged by the sprawling, universe ending/mashing output of the Big Two right now and feel the need for a bit of a chill out session, man, do I have the funnybook decongestant for you. Simple, funny, imagination-packed and requiring no Battleworld maps or Pre-Crisis/Crisis/Post-Crisis timeline spreadsheets is the palate-cleansing The Kurdles by Robert Goodin. *

On a rainy night, a spoiled child thoughtlessly tosses a Teddy Bear named Sally from a moving car. Sally, resourceful and brave, picks herself up out of a pile of mud and makes her way into the woods. Things get worse for her from there, until she ends up just outside of a mysterious place called Kurdleton and befriends a unicorn, a scarecrow, a dog and an odd creature that constantly changes colour named Pentapus.

So begins The Kurdles, a fun and adorable adventure that will likely win over even the most jaded of readers. Publisher Fantagraphics ballsily compares the book to both Jeff Smith’s Bone and Carl Barks Uncle Scrooge, but it actually proves a fair comparison. The Kurdles feels just as at home in the company of those All Ages comic titans as Sally does with her new friends in Kurdleton.

Goodin, an animator whose credits include Duckman and American Dad, brings a sure sense of character design and a love of sumptuous watercolours to The Kurdlesand the book bursts with individuality and cuddliness as a result. Sally, with her little dress and stumpy Teddy Bear limbs is just adorable, but she’s far from a show-stealer – each and every character is given his, her or its own personality, voice and moment to shine over the course of the comic’s fifty-odd pages. Hijinks and attitude abound in the interactions of this bouncy little crew and when the treehouse that Sally’s new friends reside in (beautifully introduced over a striking double-page spread) becomes afflicted with a hair-growth disease, this odd little team has to act fast to find a cure before their home, now a distinctive character in its own right, literally grows legs and walks away.

This hardcover, album-sized book is a virtual charm factory and a more welcome and pleasantly short diversion from both your day and the intricacies of mainstream event comics I can’t imagine.** This volume feels very much like an introduction to further adventures (just who, for example, is Schleb Rohan?) and hopefully this hunch proves correct, for a return to this distinct, fun group of fast friends, ever sweet even as they bicker with one another, can’t come soon enough.

Home renovation has never looked as colourful, enjoyable or charming as it does in The Kurdles, despite what Channel 9 might tell you, so give your poor brain a moment’s break from trying to remember what actually happened in Inferno or a two-decade old issue of Thor that’s suddenly relevant again,*** and join The Kurdles in their straight forward, lovely, goofy adventures.


* As a forty-year-old man who started reading Marvel at the age of 5 (no, really), I actually am very impressed with what I’ve seen of Secret Wars. I swear I’m not being snarky and taking a shot, I have a lot of love for the MU and all its obtuse wee corners.

** No, really. I bought Sleepwalker. Off the shelf. In the newsagent.

***Look, my dream is to write Werewolf By Nightand Ka-Zar, okay? I swear…

WEBCOMIC OF THE WEEK : SUPER MARIO BROS
By James Harvey

Perhaps there’s something wrong with me, but if there’s one thing I’m growing to love it’s comics that explore the existential crisis that video game characters would experience if the Sisyphus-like nature of their existence was actually known to them. Complete this task. Die. Repeat. Get to next task (maybe). Die. Start again. Die. Repeat. Thankfully, I don’t think I’m alone here and I suspect that’s why things like Edge of Tomorrow and Source Code resonated as much as they did at the cinema – it’s very easy for us to feel empathy for characters to have to, repeatedly, begin again from scratch. As our “quests” are blocked and thwarted on a daily basis, so are theirs.

Anyway, James Harvey’s Super Mario Bros is yet another fine example of not only the above but also the wonder of the scrolling webcomic. As I’ve mentioned before, comic space-time becomes weirdly fluid when a creator uses a scroll effectively, bridging the gap between comics and animation with no need for Flash effects.

To say too much more would be disservice to this blackly humorous short, but Harvey (Masterplasty, Zygote) mixes it up here wonderfully, going from light-hearted and cartoony to full blown psychedelic meltdown impressively quickly.

I was going to try and find something Battling Boy related to tie into the All Age goodness of The Kurdles, but in my Paul Pope search I stumbled upon this video and sat there open-mouthed for most of its run time.

David B., Kagan McLeod, Paul Pope, Samuel Hiti and Frederik Peeters jam on a picture in France. It’s thirteen minutes of inky amazingness. How could it not be included?

Cameron Ashley spends a lot of time writing comics and other things you’ll likely never read. He’s the chief editor and co-publisher of Crime Factory (www.thecrimefactory.com). You can reach him @cjamesashley on Twitter.
Posted by All Star Comics Team at 12:25 PM