ALL STAR RECOMMENDS FOR JUNE 2ND 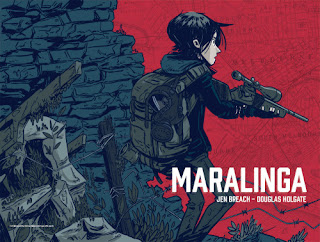 So as soon as last week’s column about women of post-apocalyptic comics went up I totally remembered about Chiyoko from Katsuhiro Otomo’s Akira. I also really should’ve included The Girl With No Name from the wonderful Maralinga by Jen Breach and Doug Holgate. The piece would have been better for those inclusions. So yes, read both of those too. Holgate tells me he re-reads Akira annually, which I really think should be a thing we all do. Maybe we can figure out an Akira Readathon or something like that. Hmm.

Everything’s deliberately short and digestible this week after last column’s bigness, so onward. 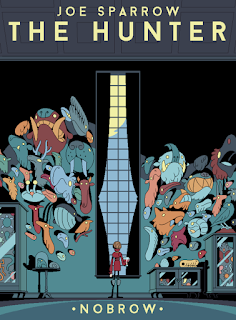 COMIC OF THE WEEK : THE HUNTER
By Joe Sparrow
Published by NoBrow

Writer-artist Joe Sparrow makes the most of the limited space that makes up The Hunter. A fully-realised world, a creeping horror, expressive and fluid characters, rich colours and all manner of beasties all spill out over the course of only 24 pages, making the comic the perfect primer on the creation of a one-shot.

The plot is simple: The Fourth Earl of Resienskog, unable to create, debate or seduce like his fellow aristocratic acquaintances, decides to make his mark upon the world by killing one of every creature. His trophy room grows, but his dissatisfaction and isolation remain and a gothic twist or two awaits him on his final hunt. At the story’s conclusion, the Earl finds fulfilment in a most surprising way.

Part of boutique English publisher NoBrow’s 17x23 project (a line of one-shots dedicated to exploring the work of unique cartoonists), The Hunter is a fast but dense and cleverly structured read that showcases Sparrow’s cartooning gifts perfectly. The oddly jagged, old school line of Sparrow’s computer rendering adds an intriguing layer of artificiality to his earthy landscapes and lively figures, juxtaposing the movement of modern computer animation with the clunkiness of 8-bit. Funny and quirky, The Hunter seems the perfect little comic book diversion at first glance, but its surprising conclusion and real depth hopefully will provoke some conversation. I’d love to chat about it, so if you read it – let me know.

WEBCOMIC OF THE WEEK : BIRD AND MOON
By Rosemary Mosco

We move from hunting to conservation. Rosemary Mosco’s colourful, adorable little nature comics are filled with cute animals, scientific titbits, and calls for environmental awareness. They are easily digested, lovingly presented and breezily light-hearted, even when expressing serious environmental concern.

Come for the most recent “Salamanders Need Your Help,” a thoughtful and fact-packed little comic that also provides an urgent call to arms to save the troubled salamander, and stay for such other gems as “Preparing For Winter,””Nature Fashion Tips,” “Animal Cheat Sheet” and heaps more. I’d imagine parents with intuitive little ones will get as much out of Rosemary’s lovely work as full-grown animal lovers.

COMICS VIDEO OF THE WEEK : ALAN MOORE ON PROVIDENCE AND HP LOVECRAFT

Oh, Alan Moore. Yes, the grumbling, wizardly curmudgeon of comics is back in a big way and, as usual, is doing stellar work. If you haven’t read Providence #1 yet, I highly recommend doing so. I plan on extensively revisiting the book somewhere down the line, but for now, enjoy this short little video of Moore passionately espousing his admiration for Lovecraft and framing the work of Providence’s main influence (although there are many) in a succinct, direct and clear way, perhaps illuminating for many what was just so special about this bigoted shut-in who constantly wrote about what lies beyond the breaking point of man’s sanity. Hot tip for the Providence inclined: pick up Robert W. Chambers’ The King In Yellow, or read INJ Culbard’s upcoming comics adaptation of this particular book. It looks to be extremely relevant to the weird fiction tapestry Moore’s threading together.

Cameron Ashley spends a lot of time writing comics and other things you’ll likely never read. He’s the chief editor and co-publisher of Crime Factory (www.thecrimefactory.com). You can reach him @cjamesashley on Twitter.
Posted by All Star Comics Team at 12:49 PM