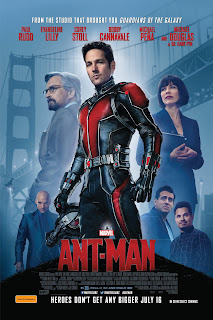 The next evolution of the Marvel Cinematic Universe brings a founding member of The Avengers to the big screen for the first time with Marvel Studios’ “Ant-Man.” Armed with the astonishing ability to shrink in scale but increase in strength, master thief Scott Lang must embrace his inner hero and help his mentor, Dr. Hank Pym, protect the secret behind his spectacular Ant-Man suit from a new generation of towering threats. Against seemingly insurmountable obstacles, Pym and Lang must plan and pull off a heist that will save the world….

Thanks to those tiny, yet heroic folks at Marvel Australia & New Zealand and ANT-MAN in cinemas July 16th, we have 10 Double In Season Passes to give away!

To go into the draw for your chance to win all you need to do is tell us, "What is the best part of being small?"

Terms and Conditions:
Only entries made via the the comments on the Facebook post will be included in the draw.
All entries will go into the All Star Barrel and winners will be drawn at random.
Entries close 6pm Monday the 6th of July and winners will be announced Tuesday the 7th.
Tickets will only be available to pick up from the store and winner must produce photo ID upon pick up. Tickets MUST be picked up no later than a week after the draw. Any remaining tickets after this date will be given away at our discretion to make sure they don't go to waste.

A huge thanks again to Marvel Australia & New Zealand and ANT-MAN in cinemas July 16th.