ALL STAR RECOMMENDS FOR FEB 23RD 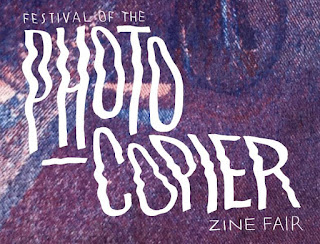 
Man, was it was a total palate cleanser to attend The Festival of the Photocopier last weekend or what? It was just beautiful. Town Hall was packed, packed I tells you, with stalls and creators and shoppers and lovers of zines and comics. The atmosphere was welcoming, diverse and, as my wife pointed out, strongly feminist and LGBT friendly. Sure beats the hell out of the days when the culture consisted of a few sad-looking guys sitting around a table. We bought a bunch of stuff but did not take enough money, silly us, and missed out on Chris Gooch’s Curse You Skull Face as a result. Shit. If anyone has a spare, drop me a line. I can’t speak highly enough about Chris’ work. He’s a talent to watch and support. I did get Gooch’s Torn, however, and, well…watch this space for more on that. 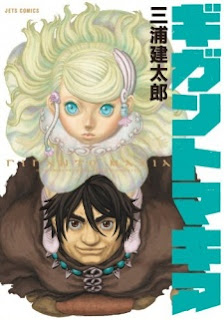 Creator of the beloved manga Berserk, Kentaro Miura’s Giganto Maxia is a hotly anticipated book, finally arriving in shops just last week to bewilder and blow minds with its mix of kaiju, wrestling manoeuvres and infectious sense of the ridiculous. What’s it about? Okay, stay with me here, this might get a bit rocky.

Following a near extinction event, known as The Great Destruction, strange hybrid creatures, entirely new lifeforms and even old mythological beings exist on the planet, jockeying for space alongside the remainder of humanity (Hyus) and hybrid beetle people (Myus). Humanity being humanity, we’ve learned nothing and have created the Empire of Olympus in which we seek to colonise and reclaim the planet. To do so, we’ve enlisted the aid of ancient “Terata” monsters, colloquially known as “Giganto,” to stomp out all opposition and seek out and enslave Hepi, an aspect of Gaia herself, who has embedded itself in a hidden part of the earth, terraforming desert back into lush thriving greenery. Opposing them are an ex-gladiator fond of puro resu moves named Delos, and Prome, a mystic who magically heals Delos’ frequent battle wounds. They may be completely outnumbered and out gunned, but they have a rather giant ace up their collective sleeve in the form of the titan named Gohra.

Ahh, forget it, plot be damned. Giganto Maxia is a just a joyful piece of comics lunacy. Hybrid bug men riding giant winged beetles across desert plains, ginormous flame-spewing squid creatures, cyclopean fertility gods growing into the earth and terraforming it in the process, a goofy loveable warrior hero whose style of fighting is almost entirely suplex-based – there is a visual surprise on virtually every single page. It’s like Miura read Attack on Titan, hurled it across the room in annoyance, rolled up his sleeves, unscrewed a bottle of unfiltered sake and went, “You want bigness? You want monsters? Alright, I’ll give you bigness!” His imagination is boundless, his visual design flawless. His pages are intricate and super-detailed. The world he creates energetic and lovingly constructed, from massive beetle nest villages right down to the scarab helmets his myu warriors wear into final battle. Giganto Maxia is an absolute comics treat. A single-volume of energetic, cinematic and joyful cartooning.

But, honestly, it comes right down to this – if you have no interest in seeing a giant sinewy demigod delivering a brainbuster or a leg drop to an equally giant monolith of a monster that looks like a Japanese demon gone cenobite, you might well be beyond any hope as a comics fan. 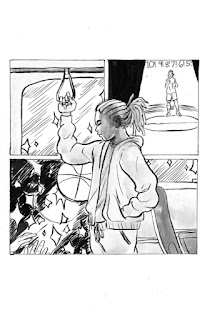 WEBCOMIC OF THE WEEK : MAPS TO THE SUN
By Sloane Leong

Being serialised monthly at Zainab Akhtar’s wonderful Comics and Cola site is Sloane (From Under Mountains) Leong’s “girls’ basketball drama” Maps to The Sun. The stylish first chapter went up earlier this month and it, artistically, sets the tone, introduces its hoop-dreaming lead and her hard-working dad. Thus far looking to be a straight-up, non-speculative, realistic (if dreamy) girls’ sportscomic, Maps to The Sun should be bookmarked by every reader seeking diversity in story, creator and character. I look forward to seeing where this heads. 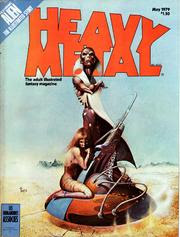 This is a talent-rich but underwhelming issue in totality, proof that the sum of several excellent parts to not make a single, glorious whole. It’s not entirely the fault of editorial, however, as the final chapter of poor Angus McKie’s “So Beautiful and So Deadly” did not ship to the HM offices in time thanks to a postal strike (or something). It’s a weird thing, in 2016, to look back at the trials and tribulations of publishing past. How terrifying for an international artist like McKie wondering whether or not his art boards would actually survive an overseas journey. The ulcers comics artists must have had back in the day…

No less a talent than Rick Veitch makes an artistic appearance with a single splash page titled, “Born Again” in which naked humans raise nesting birds up to the cosmos which swirls away above. Make whatever meaning you like from that, to me those birds look pretty contented, sitting there all chubby in their nests, so perhaps the obvious “souls taking flight” or some such thing might need a bit of a rethink. Perhaps ultimately, we’re happy here, stuck in our flesh vehicles, no matter how we may long for some sort of transcendence. That’s my rather downer take on it…

Part One of Walt Simonson and Archie Goodwin’s adaptation of “Alien” arrives fairly early in this issue (following “…Arabian Nights”). Walt’s in top form, his artwork instantly recognisable yet every character on the page bears a more than passing resemblance to his or her cinematic counterpart. His Tom Skerritt is particularly on point. Plus, just look at that logo!

In place of the missing conclusion to “So Beautiful…” is “Entropics” a story which, according to the editorial, had been kicking around the office for sometime awaiting placement. It’s a curiosity this piece, reading like some underground comic from the period but looking like something Marvel would have happily published. Artist Marshall Rogers is the reason for this, bringing his gorgeously sleek lines to Mark Arnold’s tale of…something…it’s actually not terribly readable, but my god those pages! Rogers’ alien landscapes, bipedal cat creatures, space squids and curling trails of hundreds of floating butterflies are just lovely, which should be unsurprising to anyone familiar with this master’s work. However, also featuring penile extenders and a whole host of silly stuff, it’s little wonder “Entropics” was held over for as long as it was. So pretty. So stupid.

Alias is back with more Only Connectin “Lifestyles” which is the weakest of the three instalments thus far published, but is still an excellent addition to the issue. A society of robots consumed with the need to obtain the latest in “plastomatics,” or face sculptures, goes mad when Kahixe, a leading artist in the field is arrested for “humano-regressive tendencies.” Basically, he’s been working on a full body plastomatic suit fashioned after the human female. As he’s hauled away, some nearby fashionistas can be heard to remark that next year’s styles are trending toward the cubist, the irony here perhaps being that the freaky, avant-garde aspects of much of cubism exists solely because of humanism, the troubled mind of Picasso for instance, and the spontaneous, obviously human trait of simultaneous perspectives. The angular cubist “Fruit Dish” by Braque is no less human than that of Caravaggio, y’know? Or maybe those robots just hate us fleshy ones and that’s all there is to it…

Druillet’s back (yay!) going lo-fi and confining himself to black and white pages and – shock – actual panels, widescreen horizontal panels so in-vogue in 2016 no less. “Dancin’” is not much of a story, centred around a kind of post-apocalyptic rave, but it’s fascinating to see Druillet so restrained after the full colour, widescreen madness of “Gail” and playing by the established “rules” of comics even as, with this widescreen panel use, he’s peering ahead to the layouts that such comics like Injection and Providence use so well – a kind of bridge between the decompressed excess The Authority inspired and the tight, super-confined grids of something like Watchmen.

Ben Katchor’s “A Proposed Architect” rolls along dreamily, as members of The Exterior Street Men’s Club (actually chicken-like creatures wearing dramatic masks) spy a new candidate at a nearby café and concoct an apocalyptic scenario based upon the assumed contents of their dapper prospect’s shopping list and innate knowledge of the city. An odd diversion, but a welcome one and certainly a beautifully illustrated one at that.

Gray Morrow’s back with the first part of his “8 Belles,” individual stories focussing on “individualistic women…unwilling to play a passive role.” Sounds great, Gray, shame your first such woman, Amora, spends half the episode nude. Okay, that’s probably a little unfair as comely Amora does get the drop on some dopey dudes using her feminine wiles, plus it’s Gray Morrow – the art is gorgeous, if a little cramped by squeezing so much story and dialogue into so few pages. Still, those of you with Non-Compliant tattoos will roll your eyeballs at this for sure.

I’m not going to talk about “The Airtight Garage” anymore until the collected Dark Horse edition as I think it reads better in longer page chunks and, really, how many more times can I say how lovely it is. It is really lovely though….

There’s a few other odds and ends here but, really, a little underwhelming considering the mountain of talent involved. Boo.

COMICS VIDEO OF THE WEEK : BACK TO THE GUTTERS EPISODE 1: BEN DEWEY

A month or so back, I featured Jamie S. Rich talking with Mike Allred as part of Rich’s From The Gutters web series. Well, it has returned! Back to The Gutters kicks off with the incredible Ben Dewey, of The Autumnlands with Kurt Busiek, who takes us through not only his artistic process but his journey to full time comics and the dedication and discipline it takes to not only “make it,” but produce the work itself. Inspiring stuff and a wake-up call to everyone who finds excuses not to make their art. What a cool guy. His artistic talent is only matched by his niceness and his musical talent, which is also on full display.

Cameron Ashley spends a lot of time writing comics and other things you’ll likely never read. He’s the chief editor and co-publisher of Crime Factory (www.thecrimefactory.com). You can reach him @cjamesashley on Twitter.
Posted by All Star Comics Team at 2:06 PM