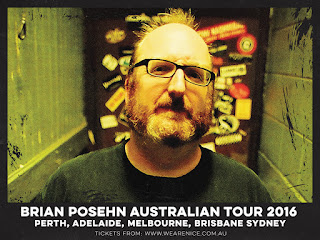 With an extensive (and eclectic) career spanning 20 years, American comedian/actor/writer Brian Posehn is set to head down under in April 2016 for his first Australia tour – following a constant string of shows in the best comedy clubs and rock venues in the US.

He has cemented himself as the king of nerd humor, producing/appearing in culturally relevant podcasts, TV shows and movies throughout his career. He has co-starred in Universal’s feature The Five Year Engagement and in the popular Canadian indie comedy, Lloyd the Conqueror. In recent times, Brian has made guest appearances on popular sitcoms The Big Bang Theory, Guys with Kids and Anger Management. He starred in Comedy Central’s hit show, The Sarah Silverman Program for three seasons, and toured as one of the original members of Comedians of Comedy.

Thanks to the great folks from Nice Events and the Melbourne stop of Brian Posehn's Australian Tour, we have 2 Double Pass to his show at the Corner Hotel on the 15th April to give away!

To go into the draw for your chance to win all you need to do is tell us, "Making appearance all over the place, from The Sarah Silverman Program, to a voice on Adventure Time, to writing Deadpool comics, what is your favourite Brian Posehn role to date?"

SPECIAL NOTE: As this prize is for a specific time and date, please only enter if you can attend the show on the listed date.

For more info and ticket sales head to: http://wearenice.com.au/tickets/brianposehn
Posted by All Star Comics Team at 6:31 PM