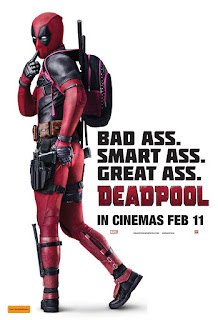 Based upon Marvel Comics’ most unconventional anti-hero, DEADPOOL tells the origin story of former Special Forces operative turned mercenary Wade Wilson, who after being subjected to a rogue experiment that leaves him with accelerated healing powers, adopts the alter ego Deadpool. Armed with his new abilities and a dark, twisted sense of humor, Deadpool hunts down the man who nearly destroyed his life.


DEADPOOL HITS CINEMAS ON FEBRUARY 11 and to celebrate the release of everyone's favourite Merc With A Mouth, we’re giving you the chance to win one of 10 in-season double passes to see the film!

To go into the draw for your chance to win all you need to do is tell us, "Deadpool hasn't always been the most popular comic book character but now he is everywhere. What is it you love about Deadpool ?"

-Only entries made via the comments on the Facebook post will be included in the draw.
-All entries will go into the All Star Barrel and winners will be drawn at random.
-Entries close 6pm Monday the 8th of February and winners will be announced Tuesday the 9th.
-Tickets will only be available to pick up from the store and winners must produce photo ID upon pick up.
-Tickets MUST be picked up no later than a week after the draw. Any remaining tickets after this date will be given away at our discretion to make sure they don't go to waste.

Posted by All Star Comics Team at 5:11 PM