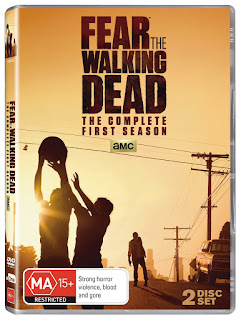 Living in the same universe as The Walking Dead, FEAR THE WALKING DEAD is a gritty drama that explores the onset of the undead apocalypse through the lens of a fractured family.

Thanks to the Home Entertainment release of FEAR THE WALKING DEAD : SEASON 1, available now on Digital and Blu-Ray and DVD March 2 , we have 5 DVD Sets to give away!

To go into the draw for your chance to win all you need to do is tell us, "The Walkers of Walking Dead get a pretty raw deal. Stay out of their way and they'll leave you alone. So in place of the word FEAR, what other word would you use that might better describe a more peaceful existence with the Dead?"

Entries close 6pm Monday 29th of February and winners will be announced Tuesday the 1st of March. Winners will be notified by Facebook as to when their prizes will be available to be collected.

A huge thanks again to Entertainment One and FEAR THE WALKING DEAD: SEASON 1 IS AVAILABLE NOW ON DIGITAL. ON BLU-RAY AND DVD MARCH 2!

Posted by All Star Comics Team at 5:33 PM