ALL STAR RECOMMENDS FOR MARCH 1ST 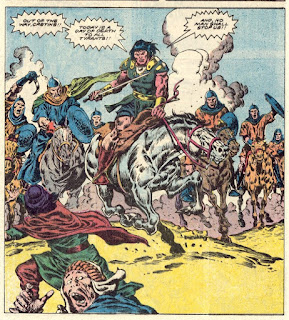 I went back to one of my fave childhood comics ever this week, Conan The Barbarian #184 by writer Jim Owsley and the all-star (no pun intended) art team of John Buscema and Ernie Chan. I haven’t read this issue since 1986, when, it was purchased by young pre-pubescent me from Ringwood East newsagency for $1.25.

Inside, Conan battles a madman named Maddoc, who talks to the corpse of his dead beloved and throws giant ninja stars that look like circular saw blades, to a violent and bloody death. It totally holds up. In fact, it’s as demented as I remember it, proof that the comics code really was just pointless exercise in placating the idiotic.

Anyway, that’s what I did this week… 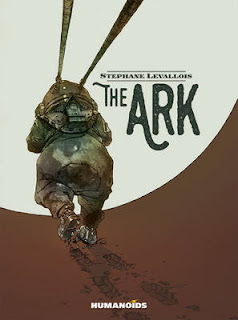 COMIC OF THE WEEK : THE ARK
By Stephane Levallois
Published By Humanoids

A man in deep sea diving suit drags a massive sea vessel across a crusty, dry desert landscape. Onward he treads, impossibly, under a blazing sun. Another man drives across the plains, searching for the daughters of the wind, who are imprisoned in cages mounted atop towers awaiting freedom and the chance to unleash revenge and environmental chaos. War rages between stilt-walking desert natives and their rifle-wielding enemies who look like they’ve stepped out from WWI. Cathedrals rise from the sand, warriors ride camels 100-foot-tall, a train conductor vainly attempts to blow sand from the tracks his train must travel along. All the while, the diver trudges along, hauling his ark behind him.

Wordless outside of poetic chapter breaks and intros, Stephane Levallois’ The Ark arrived from Humanoids last week, looking like something from the heyday of Metal Hurlant in its silent strangeness, as striking as something by Kent Williams or Jon J Muth in its grey-washed pages and as impressively constructed, from a page mechanics standpoint, as anything you care to put it up against. Make no mistake – this is an artist’s book. From the very first page of the diver’s boot crunching down upon previously virgin clay-crust to its cataclysmic conclusion, The Ark is a book to return to, to study scene by scene its layout and perspective choices and both its visual beauty and efficient use of comics visual language.

Its cinematic feel is likely due to its author having worked in film and advertising. An accomplished director in his own right, Levallois has worked as a concept artist on everything from the last two Harry Potter films to X-Men: Days of Future Past. His imagination is widescreen and dreamlike, as evidenced by so many striking images in The Ark – the burning bodies of the stilt-walkers under a full moon, a biplane hung from the ceiling of the cathedral like a massive crucifix, a zeppelin filled with soldiers passing over the prisons of the daughters of the wind and, of course, the diver with his empty ark, its epic trail becoming a mass grave for the bodies of the war-dead. With its post-apocalyptic desert, elemental fury of its females and foolishness of men and their wars there are odd narrative parallels to the Mad Max movies here as well, but stripped of their genre trappings and concise revenge/action film structures. Imagine George Miller stepped down and was replaced by someone like surrealist filmmaker Jan Svankmajer.

If you like your comics crisp and tight and straightforward, this is likely not the book for you and I wouldn’t blame you for that in the slightest. However, if you enjoy poring over beautiful pages, deciphering their use of symbol and technical construction, The Ark comes highly recommended. I’ve read it through twice now and have barely scratched the surface of its beautiful, flawlessly assembled pages. 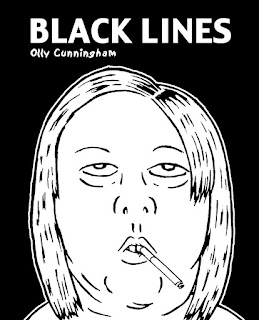 Good Lord. From the highs of cinematic dreaminess to the scungy lows of underground comix all in a single segment. The work of Ireland’s Olly Cunningham will likely never be endorsed by his country’s tourist board but I’m more than happy to do so in its place. A tale of dodgy people with dodgy haircuts doing the titular dodgy pills, Cunningham’s depraved sense of humour and disturbed comix sensibilities make Dodgy Pills a great little read. Filled with bad drug trips, stomach turning sexual activity and the casual punching of an old lady, this one comes with a content warning. It is however funny, clever and a great example of DIY punk rock comics. Cunningham’s gross, clammy characters are Irish urbanity at its most grimly revolting and are easily the most unsavoury people to grace the comics page in a long time, right there with the grinning psychopaths of Joan Cornella’s work and the sick creatures that crawl out of Johnny Ryan’s brain. Good job Olly, you monster, I cannot unsee them now. 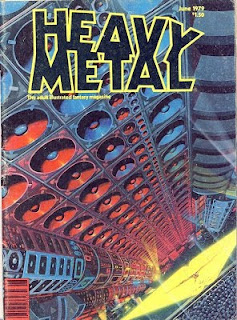 As there is very little variety of content in this June 1979 issue of HM, this will likely be the shortest on of these recaps I’ll do. The postman finally delivered the final chapter of poor Angus McKie’s “So Beautiful and So Dangerous” (yay!) but with the second and final part of Heavy Metal’s “preview” of the Alien adaptation by Goodwin and Simonson wrapping up and the penultimate chapter of Corben and Strnad’s “New Tales of the Arabian Nights” also here, some new blood is clearly needed. Enter “Captain Future,” a kind of golden age SF satire with some simply lovely cartooning by Serge Clerc from a script by someone named Phil Manoeuvre, which may be the single greatest comics writing pseudonym ever, with apologies to Matt Fraction. Unfortunately, Manoeuvre is no Fraction and the script to this lengthy story, broken up over the course of the issue, really doesn’t push anything close to resembling my yes button.

HM is at its best when its SF is artful, psychedelic, transcendental or ribald and hilarious. Of all of those things, “Captain Future” is merely artful – which is actually a great deal more than many comics actually manage, granted, but this fact only heightens the overall disappointment. Clerc’s art, at its finest, resembles Moebius’ “goofy” style, with exaggerated chins and big noses, the style he uses when he was, by and large, farting around or trying to be comical or satirical (as we saw in “The Hitman” a few issues back) Mix that with some Darrowesque Atomic Style and hints of the cartooning of Tardi and you’ve got three titans jamming through one man’s pen. It’s good stuff.

However, as a kind of cheeky Buck Rogers riff, it’s ultimately unengaging at a writing level. A man named Charlie Fyutcher (get it? Yuk-yuk) is transported by mistake into the middle of a galactic war, but his simpering everyman act in the face of alien terror grows old pretty quickly and the gags all just fall flat. It all really does look terrific, with Clerc drawing his ships right down to the individual rivet and his characters’ expressive faces and body language imbue a whole lot of life into a pretty tepid script. How can space pirates and exploding ships and ancient ruins and faux pulp energy by somehow dull? I’m not actually sure, it just is.

But fear not, for next issue features, among other things, an SF psychedelic masterpiece by none other than Neal “I’m Crazy!” Adams and NZ-born illustrator Michael Hinge that will blow your eyeballs from their sockets.

COMICS VIDEO OF THE WEEK : NEMESIS THE WARLOCK BBC TV 1988

Okay, just when you thought things couldn’t get any weirder, here’s Tony Robinson from Black Adder and The Worst Jobs in History introducing a segment from a frankly hilarious attempt to make Pat Mills and Kevin O’Neill’s Nemesis The Warlock into a stop motion animated movie in 1988.

Would I lie to you?

Cameron Ashley spends a lot of time writing comics and other things you’ll likely never read. He’s the chief editor and co-publisher of Crime Factory (www.thecrimefactory.com). You can reach him @cjamesashley on Twitter.
Posted by All Star Comics Team at 2:46 PM