ALL STAR RECOMMENDS FOR JULY 11TH 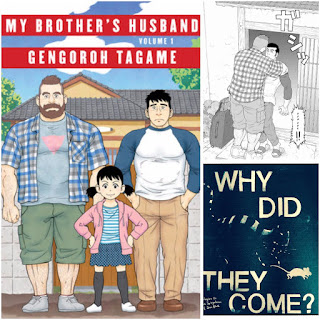 Hullo there, yes, you there, carefully eyeing off your stack of fresh funnybooks to read and while away this wintery day.

There's a lot going on right now and I've been a little distracted. So I did what one does when one is distracted - fart around on the internet looking at comics chat. Soon after, thoroughly depressed, I quit doing that and instead looked at what's coming out in the months ahead. Mood brightened, I had a list of upcoming comics to badger Mitch and Jimmy about ordering, several of which are being published by NYRB comics.  NYRB Comics is putting together a remarkable slate of international material, perhaps anchored by last year's highlight releases, the much-gushed-about Peplum by Blutch and Soft City by Pushwagner.

But here's a few more to look out for, all coming towards the end of 2017:

Mark their release dates on your calendar, discerning reader... 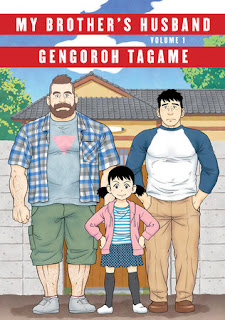 COMIC OF THE WEEK : MY BROTHER'S HUSBAND VOL.1
By Gengoroh Tagame

It's a real shame that much of the Pride Month-related comics chatter concerned the ill-timed and possibly ill-conceived release of Howard Chaykin's Divided States of Hysteria. I've not read the comic, so I'm not going to discuss it any further. Instead, I'm going to offer up an alternative that's to be celebrated, a book that's deserved more promotion and more buzz from the industry and its readers than it has received, particularly given the timeliness of its release: Gengoroh Tagame's beautifully touching examination of homosexuality in Japan, My Brother's Husband.

There is some irony in Tagame delivering Pride Month's ultimate comic book celebration of gayness. If you're familiar with the author's work, the idea that a sweet story about a single father welcoming his deceased brother's Canadian husband into his life might be met with something approaching disbelief. Tagame's previous work has traditionally been explicitly pornographic in nature and often violently so. Most Western readers would perhaps have first encountered Tagame's work in 2013's The Passion of Gengoroh Tagame, which collected stories such as "Arena," in which a large, muscular, hirsute man (typical of the Tagame protagonist) enters an MMA competition in which competitors brutally rape each other during bouts. As a parody of the homoerotic undercurrent in both MMA and, particularly, fighting video games, it's wickedly hilarious but there's no denying the nastiness.

I first encountered Tagame's work in 2005 when, intrigued by a cover drawn by the artist that featured a huge, hairy Western man watching porn on TV, I naively purchased a copy of G-Men (a magazine Tagame co-founded) from a vending machine in Osaka that exclusively sold pornographic magazines. Inside, I found photographs of chubby, balding, bespectacled salarymen fellating each other. It was then I realised that no matter how niche a fetish may seem to be, you will find a market for it in Japan. I also realised how strange it was that I bought this gay magazine from a vending machine on a dark corner of a street in a land where straight pornography could be struck by a stone thrown in almost any direction, particularly in Osaka. The latter part of this anecdote, believe it or not, is entirely relevant to this week's comic.

My Brother's Husband is the story of Yaichi, a divorced man raising his young daughter Kana, who is visited by a gay Canadian named Mike. Mike, as we learn, married Yaichi's estranged, now deceased, twin brother, Ryoji, in Canada and has come to Japan to not only experience the country and its culture, but to understand and appreciate exactly where Ryoji came from. It's a premise that could well disastrously turn into something overly saccharine or perhaps even sitcom-like, but Tagame's earnest intentions to explore the "largely still-closeted" (to steal from the blurb) gay culture in Japan is utterly sincere and, if anything, the book reads more like an educational text than a sitcom.  Fear not: there are no lectures, no soapbox speeches, no statistics to be found. Carried by its three lead characters, My Brother's Husband packs a tonne of charm. Mike is just adorable - constantly smiling, enthused by his chance to finally visit Japan, his warm heart and sweet nature goes a long way to wearing down Yaichi's initial resistance, informed by years of misinformation and stereotype, to the man his twin loved so dearly. Young Kana, of course, takes to Mike right away. Unafraid to ask the questions her father (and by extension many adult Japanese readers) will not, her childish naiveté, ignorance of social propriety and inquisitiveness about this hairy foreigner and his mysterious relationship to her unknown uncle carries some of the book's standout moments.

Single Dad Yaichi, with his rippling physique and unconventional (by Japanese standards) lifestyle may not seem like a Japanese everyman for native readers to invest in, but his continual processing of his own reactions to Mike's presence in his household will likely strike a chord with less open-minded readers who greet queerness as, at best, strange or, at worst, totally other. Seeing Kana's initial puzzlement over gay relationships fade almost instantly into acceptance and curiosity, Yaichi cannot help but feel his prejudice melt away and a happy, healthy household dynamic is established between the three characters. 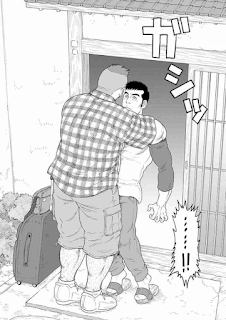 Tagame's art is lovely, clean and detail-filled; easily the best work I've seen of his. He's often been praised for the beauty of his art. I'm a fan and have always found the gushing reactions to his pages overblown. Not so here, this is standout stuff from the veteran mangaka. Tagame has a true gift for expression and some of the book's quieter moments, carried by Yaichi's interior monologue and matching facial expression and body language, are its finest. He's also clever with technique, producing moments such as a lengthy time-lapse by bisecting a drawing of Yaichi's home into two panels - the first in daylight, the second in night. His use of repeating panels is similarly expert, allowing Yaichi the space to understand his own reactions to his brother-in-law's kind, but challenging presence and formulate answers to the questions he needs to answer. 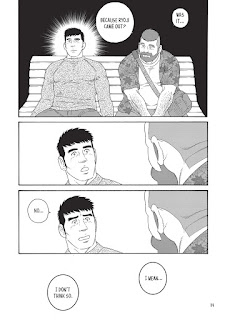 Exceeding expectation on all fronts, the first volume of My Brother's Husband should be championed by readers who are honestly seeking diversity in the comics they consume and earnestly invested in the diversity of creators they read. An All-Ages examination of gayness in Japan by an openly gay Japanese comics creator should check more diversity boxes than may even be on your list. Do not make the mistake of thinking this is some token publishing effort to capture a queer readership, however, as My Brother's Husband is lovingly told, beautifully illustrated and handsomely designed. Likely to be devoured in a single sitting, the concluding volume to this sweet story that may rewrite the meaning of "family" for so many of those in its creator's homeland honestly can't come soon enough. This is the book to read with Pride. 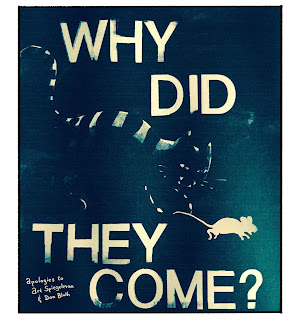 WEBCOMIC OF THE WEEK : WHY DID THE IMMIGRANTS COME?
By Mike Dawson

Brilliant stuff from Mike Dawson over at The Nib this week.  Using Spiegleman's Maus as an obvious influence, Dawson charts the rise of European immigration to the United States from 1840 onwards and follows up with the harrowingly similar arrival of many South Americans in the 1980s. It's beautifully drawn, but it's Dawson's final panel that's the most potent, driving home the indisputable fact that so many who protest the arrival have forgotten just where it is their family trees trace back to. Sobering stuff for a week in which a Muslim man in London was stopped, handcuffed, had his details taken and was thoroughly searched for six minutes for suspiciously wearing too many clothes. The look on that man's face is heartbreaking.

Sorry, I know this isn't comics but it just has to be this week's video. Hey, it's animated. Close enough....

Witness this cartoon recreation of David Bowie, Brian Eno and Tony Visconti working on the brilliant track "Warsawa" from the classic, and my own personal favourite, Bowie record, Low. Whoever does the Bowie voice is just spot on and this version of Visconti's continual reminder of the fact that as co-producer, he's doing far more than you probably think is a hilarious reminder that Low was way more than just a Bowie-Eno project. Fun stuff for not just Bowie fans (I promise!).

Cameron Ashley spends a lot of time writing comics and other things you'll likely never read. He's the chief editor and co-publisher of Crime Factory (www.thecrimefactory.com). You can reach him @cjamesashley on Twitter.
Posted by All Star Comics Team at 11:45 AM