ALL STAR RECOMMENDS FOR JULY 25TH 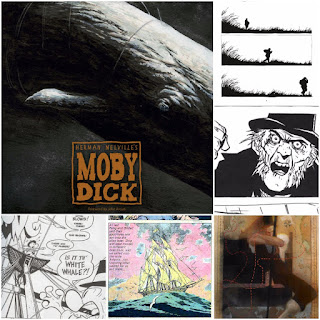 Reading this week's feature comic, Christophe Chabouté's Moby Dick made me want to dig out Chris Wright's 2012 debut, Blacklung as the two books feel so thematically simpatico. Beautifully written, Wright's comic charts the journey of an unfortunate scholar, kidnapped, placed aboard a pirate ship and forced to transcribe the rantings of its blasphemous Captain, a man attempting to commit as much violence as possible to ensure he meets his beloved in hell.

Yeah. Top that for a premise.

Like Moby Dick, Blacklung features a disturbed but charismatic ship's Captain hell-bent on achieving his mad goal. Many of the crew are as equally crazed as their leader, but from syphilis rather than obsessive quest, and again like Chabouté's interpretation of Moby Dick Wright's comic contains moments of absolute unrest.

Wright's blobby monster-men figures and intricate but messy cross-hatching go along way to building reader discomfort. There's really something not quite right about these leering, roughly drawn cartoon pirates and their mammoth, three-fingered fists. Anyway, Blacklung is as good as I remember it to be. Really worth your time if grim, existential, but brilliantly poetic pirate-horror sounds like something you need in your life. And honestly why wouldn't you? It's out of print I believe, but make Blacklung your own personal white whale to hunt, no matter how long it takes... 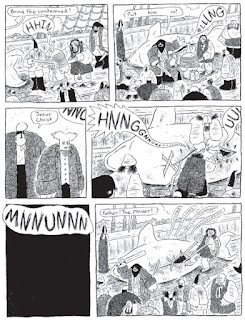 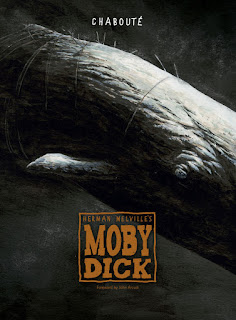 COMIC OF THE WEEK : MOBY DICK

Herman Melville's enduring classic of American Literature has been adapted into comics numerous times over the decades, each with its own striking, visually lush moments.

There was this effort by Norman Nodel from a 1956 issue of Classics Illustrated: 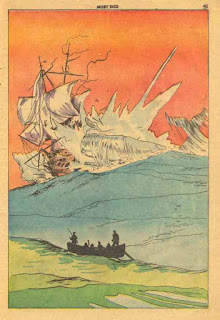 There was this effort from a 1976 issue of Marvel Comics Classics by Alex Nino: 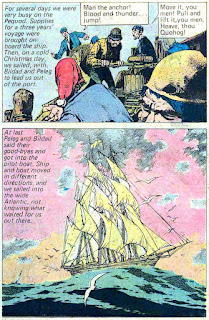 There was even this 1990 effort from an issue of Berkley/First Comics' Classic Illustrated by Bill Sienkiewicz: 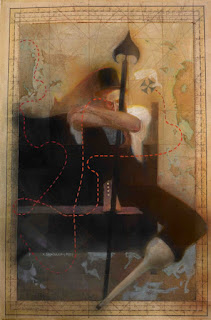 The influence of Melville's Moby-Dick even worked its way into Jeff Smith's all-ages gem, Bone: 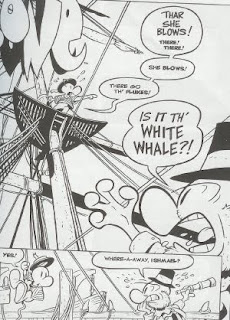 That's quite an illustrative roster.

Yet, of all attempts to squeeze the epic 1851 novel into the comics medium, it's the latest effort that's far and away the most successful. French artist Christophe Chabouté succeeds where all those before him failed for two simple, blindingly obvious reasons: expansiveness and a brave willingness to allow image to stand in place of word.

Chabouté's adaptation is easily the most cinematic comic book translation of Melville yet, jettisoning the almost slavish devotion previous attempts had to cramming in as much of Melville's striking prose as possible in favour of striking black and white image. Granted, adapting a classic is surely never an easy thing, but Chabouté's characters have the page count to move and breathe on the page, unencumbered by captions filled with text boxing them into their panels. This is not to say that Chabouté abandons the source material's narration and dialogue entirely, the book is far from silent, but instead he picks his moments to showcase Melville's words.

Chabouté's distinctly visual approach to the source material is made clear from the book's very first sequence; Ishmael leaving land for the last time, approaching The Spouter Inn for his final night on solid ground. Ishmael not only walks across and out of panel but, once exited from the right of panel, seagulls enter from his departure point, heading to the safety of the land he's leaving. It's a brilliant, beautiful opening. 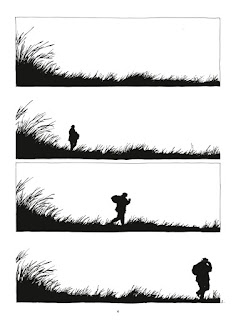 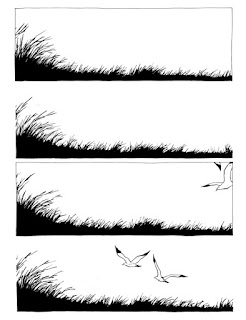 Chabouté's cannibalistic harpooner, Queequeg, is everything you'd want from a visual representation of the character - towering, grimly countenanced, but with that oddly noble streak shining through.  Queequeg's charisma is apparent, but perhaps most striking is the manner in which Chabouté renders the novel's nastiness, the grisliness of the whaling trade and those who plied it. The murder (there can be no other adjective) of the whales in this book is gruesome, violent and very dark, harpooners stabbing their prey with insane glee. Captain Ahab, wide-eyed and mad, is presented more as cult leader than Captain - the fixed space of his ship, The Pequod, his entire world and those treading upon it to sail into the unknowable fluidity of the ocean are bound to him in a manner almost supernatural.  Even when the crew doubts the cause, they are easily swayed back to Ahab's mad cause - to find and extinguish the white whale Moby-Dick, the representative of all that's unknowable, foreign, alien, other. 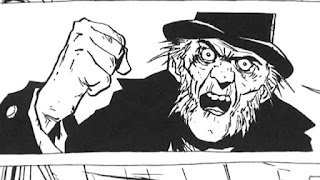 Then there is Chabouté's incredible attention to detail. The very business of surviving aboard a ship such as this needs no words in such expert artistic hands as, from knot tying to on-board metallurgy, its all here and it all looks strikingly authentic (at least to this land lubber). Representative of the author's entire approach to adapting the text, where Melville *told* his readers of every nook and cranny of The Pequod's space, Chabouté shows us, creating a beautifully-realised but disturbing "world" aboard the ship.

Honestly, I love Moby-Dick, it can be read as horror, as SF, as philosophy, as epic Literature, but I can't recall it ever being quite as thrilling as this particular take on it. The inevitable showdown between whale and Captain is stirring, epic stuff, towering over previous efforts, hamstrung by page count, to visually depict it in comics. Here, crew perish, shipwood splinters and harpoons fly in a brilliantly constructed confrontation between whale and man.

If you've never read Moby-Dick before and struggle to see the appeal in a massive book about a crazy old man chasing down a whale, I offer you this book by Christophe Chabouté. Similarly, devotees to the novel will appreciate the manner in which Chabouté somehow respectfully pares Melville's text down to the point of the blood-baptised harpoon Ahab creates to kill his enemy. This is Moby-Dick at its most bonkers, bleak and addicting, beautifully crafted by Chabouté in noir-ish black and white. There are literally too many artistic standout moments to mention, from the huge, such as the multi-page construction of Ahab's inevitable, self-destructive demise, to the little choices Chabouté makes, such as this beautiful use of lighting: 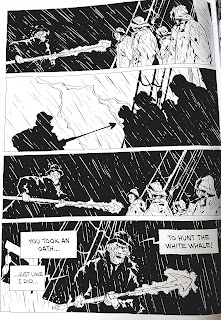 Honestly, I've said it before, but we're living in a Golden Age of comics. Two further works by Christophe Chabouté are set for release before the year's end. The award-winning Alone could well be out by the time this column drops and Park Bench is due in a few short months, both from publishers G13. If either of those two works come close to matching the author's brave, bold adaptation of one of the all-time classics of American Literature, we could well see all three sitting on Best-Of lists by the close of 2017. A remarkable effort.

WEBCOMIC OF THE WEEK : ALTERNATE ENDINGS TO MOBY DICK
By Wes Hotchkiss

I mean, really, why not more Moby Dick comics? From The Gentleman's Armchair comes this week's effort by site proprietor, Wes Hotchkiss. Hotchkiss clearly loves him some Tom Gauld, sharing not just a simplified, stripped back cartooning style obviously patterned after the author of Mooncop, but also Gauld's quirkiness. After the expansiveness of Chabouté's take on the novel, the brevity of Hotchkiss's four panels, each depicting an alternate ending to Melville's masterpiece, may be just the thing if you're feeling a little whaled-out.

COMICS VIDEO OF THE WEEK : MOBY DICK AND THE MIGHTY MIGHTOR CLIP 2

In case you thought that the recent Hanna-Barbera/Warner Bros/DC mash-up comics were the most incongruous meetings of characters you can recall, I offer you this cartoon gem from 1967. Yep, Hanna-Barbera Studios, with comics legend Alex Toth at the design table, brought Moby-Dick in a library of characters that included The Herculoids and, Moby's show-mate, The Mighty Mightor. Here, Hanna-Barbera recognise Moby as the hero he rightly is, hanging out with a couple of underwater scuba-teens Tub and Tom and beating up more deep sea villains than Aquaman and Namor combined.
Surreal stuff.

Posted by All Star Comics Team at 6:59 PM