Before we roll into this week's list of new releases, take a moment to take note...
ALL STAR COMICS BACK ISSUE AND TOY FAIR is happening again, SATURDAY 22ND JULY 11AM-5PM
We are Spring cleaning in the middle of Winter and it's you that gets all the benefits!
A full floor of independent back issue and toy sellers on Level 1 and then ground floor will be filled with our huge range of $2 Back Issues!
Two week's out, you've got plenty of time to put your "Wish List" together to make a real day of it. 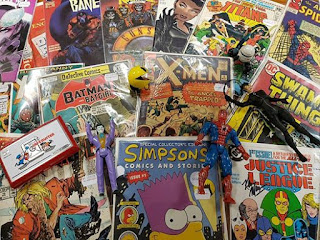 Now, what about this week's latest?
THIS IS IT, TRUE BELIEVERS! Now that Miles Morales and Peter Parker are hanging out as Spider-buds, we're finally getting the answer to who the other Miles Morales is. That's just the tip of the mystery Iceberg coming in SPIDER-MEN II #1 (OF 5).

Academy Award winner John Ridley (12 Years a Slave) returns to comics with AMERICAN WAY THOSE ABOVE AND BELOW #1 (OF 6). Set 10 years after AMERICAN WAY, follow the New American as he tries to keep communities safe amid the social turmoil of the 1970s.

Will the Dark Knight and friends be able to stop the Joker and prevent the forces of darkness from consuming the DC Universe? Find out in the follow up to DARK DAYS THE FORGE, DARK DAYS THE CASTING #1.

Matt Wagner returns to finally complete his epic fantasy trilogy with this half sized issue, a perfect jumping on point in MAGE HERO DENIED #0.

Gail Simone's creepy cult horror delves into the past of Astrid Mueller and her affliction in the finale of CLEAN ROOM TP VOL 03 WAITING FOR THE STARS.

Jennifer Walters has come out the other side of the civil war bruised and severely battered, losing herself and her green complexion. All she wants is to get her life back but when a client's own insecurities are projected onto her how will she cope in HULK TP VOL 01 DECONSTRUCTED.

Jump behind the inky curtain and see the inner working of Geof Darrow in this giant LEAD POISONING PENCIL ART OF GEOF DARROW HC.

Enjoying the reboot of classic Wildstorm character Midnighter? Why not revisit his first solo series in MIDNIGHTER THE COMPLETE WILDSTORM SERIES TP.

Warren Ellis and John Cassaday's classic series, Planetary gets a new expanded collection with extra material previously only in the absolute edition in PLANETARY TP BOOK 01.

The Madness coat has been stolen and its new wearer is hiding in the body of a teenage girl on earth who should be dead. Things get weird when memories and dark secrets start creeping in as they realise that maybe this girl should have stayed dead in DC's Young Animal's SHADE THE CHANGING GIRL TP VOL 01 EARTH GIRL MADE EASY.

Apes, apes everywhere. Eat a banana if you dare. Before you see the film, WAR FOR PLANET OF THE APES #1 (OF 4).

The Atari classic comes to life but a million times more scary than you could ever imagine. Writer and musician Max Beamis brings the videogame back from the dead in  CENTIPEDE #1.

Enaia Jin is just searching for a great Borscht in a hopeless world full of cults, gods and mortals. I have a feeling she is going to go hungry from singer, songwriter Lights with SKIN & EARTH #1.

What better time to jump on this comic than when the Kaiju gangs are about to have an all out war as they fight for power of the South Pacific in the brilliant black comedy series,
KAIJUMAX SEASON 3 #1.

The day after the US election all hell brakes loose with protesters blocking major airports and the largest mass destruction in history. President Elect sure has a lot of work cut out for him in Black Mask's, CALEXIT#1.

The comic based on classic horror movie from 1981- The Howling is picking up where the film  left off. Werewolves walk among us and their lust for blood is more dangerous than ever in the HOWLING #1.

Available for the first time in English bestselling graphic novel ALONE tells the story of a mysterious person living in a lighthouse on a tiny island. When a new boat captain begins to ask questions about the mysterious old man. his lonely life is changed forever.

Rya sees a better future for her child regardless of which dimension that it is on in the continuing fantasy adventure series, BIRTHRIGHT TP VOL 05.

A muscular wizard with a finger that zaps lightning bolts hanging out with a koala and wearing shades because his future is so bright. If the cover of this trade is anything to go by then CURSE WORDS TP VOL 01 is going to be a great read from Charles Soule and Ryan Browne.

Looking good for another week, if you've spotted something you like and need stashed just be sure to let us know before close of business on Tuesday and we'll get it sorted. Until we see you next, have an awesome week!