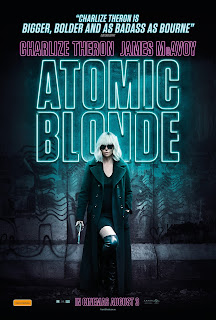 The crown jewel of Her Majesty’s Secret Intelligence Service, Agent Lorraine Broughton (Theron) is equal parts spycraft, sensuality and savagery, willing to deploy any of her skills to stay alive on her impossible mission. Sent alone into Berlin to deliver a priceless dossier out of the destabilized city, she partners with embedded station chief David Percival (James McAvoy) to navigate her way through the deadliest game of spies.

Thanks to those mysteriously sly folks from Universal Pictures and ATOMIC BLONDE IN CINEMAS AUGUST 3RD, we are giving you the chance to win 1 of 5 Double In-Season Passes to see the film!

To go into the draw for your chance to win all you need to do is tell us,
"In a world of spies and espionage, I still trust _______ with my life...or at least enough to see ATOMIC BLONDE with" filling the blank with the tag of the person you feel fits the bill and you will be entered in the draw.

Terms and Conditions:
-Only entries made via the comments on the Facebook post will be included in the draw.
-All entries will go into the All Star Barrel and winners will be drawn at random.
-Entries close 6pm Monday the 31st of July and winners will be announced Tuesday the 1st and notified soon after as to how to collect their tickets.

To find out more just head to :
www.atomicblonde.com.au
https://www.facebook.com/AtomicBlondeAU
www.facebook.com/universalpicsau
©2017 Universal Studios. All Rights Reserved
Posted by All Star Comics Team at 9:07 AM