What a week, what a week!  New comics aplenty and next Monday the 7th, we've got something a little extra special for you with...

Try something a little different on a Monday evening and join us for an "up late" in store event with a difference.

Thanks to Scribe Publications, Kayla Rae Whitaker, international author of the newly released 'The Animators' will be here for a meet and greet!

Triple R presenter and podcaster, Marian Blythe will also be hosting a Q and A. 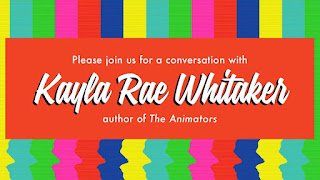 Soon after that we'll have another great in store event, celebrating a very important day. Best keep your eyes peeled!

Old meets the new in Marvel's GENERATIONS BANNER HULK & TOTALLY AWESOME HULK #1 as Amadeus Cho comes face to face with Bruce Banner. Will they actually get along and more importantly who will be the strongest of them all?

More from Hulk writer, Grek Pak. Once a year kids from around the world are chosen by Robots from space to study at the prestigious Sky Corps Academy. This year they picked the wrong kid in the story of a robot and his boy with BOOM's, MECH CADET YU #1 (OF 4).

Did you enjoy the FCBD TMNT issue? Continuing from then the Dimension X event begins in TMNT DIMENSION X #1. Will the Turtles prevail before Krang's assassin Hakk-R kill all viable witnesses?

What ever happened to Amelia Earhart? Jay Faeber (COPPERHEAD) and rising artist Sumeyye Kesgin spin a fantastical what if in ELSEWHERE #1.

Harley's determined to cross off all hero's and villain's in her little black book for the ultimate team-up mash up! Collected for the first time in HARLEYS LITTLE BLACK BOOK HC.

The murderous social experiment is finally coming to an end in UNFOLLOW TP VOL 03 TURN IT OFF. How will Akira finally defeat Larry Ferell's 140?

Did you miss out the first time round? Well you better get in quick for this hit crossover BATMAN ELMER FUDD SPECIAL #1 2ND PTG!

It's a King Kirby triple threat!
It's Jack Kirby's 100th anniversary! So what better way to celebrate than with more cosmic bubbles! as Shane Davis and Walter Simonson bring us new and old tales of otherworldly gods in NEW GODS SPECIAL #1.

See Kirby's work in all it's greatness in this (huge as in lots of pages and giant in size) Fantastic Four classic, OMG it's JACK KIRBY FANTASTIC FOUR WORLDS GREATEST ARTIST EDITION.
Spend the weekend learning about comic book icon Jack Kirby with the newly revised
KIRBY KING OF THE COMICS ANNIV ED SC.

Grump VS Sass when two of the surly cats in history go paw to paw, to give you buckets of giggles in GRUMPY CAT GARFIELD #1 (OF 3).

Only one man is willing to stand up against a half man, half dinosaur army and that guy is Turok in his all new adventures from Dynamite in TUROK #1.

From one of the most epic tabletop game ever comes the adventures of Sparky the Apocalypse wonder dog...wha? Rock Candy Mountain, writer Kyle Starks takes a bite out of the DEAD OF WINTER #1 for ONI.

Rock n' roll all night and travel through space everyday. Brendon Small- Musician behind the animated band Dethklock brings us the comic, GALAKTIKON #1 based on his new album. BOSS!

Life is rough for Lark, living on the streets of LA and things are about to get worse. Lark is being transported to an alien world where everyone wants her dead. Time to learn some sword skills. From the mind of Fables creator Bill Willingham in LARKS KILLER #1 (OF 7).

From fan favourite writer of DMZ and Northlanders, Brian Wood comes a brand new Robotech series following the adventures of Minmei, Rick and Lisa... and most importantly sweet robo-jets in ROBOTECH #1.

For convicted murderer Kinju there is only one outcome, transfer of her consciousness into a state programmed labor robot, in the ghost in the machine story with a difference, SPIRITUS #1 (OF 5).

Emmett has just had a tornado ruin his home, but a sword gathered from the eye of the storm gives him the power to battle otherworldly creatures. GOD COUNTRY TP

From the creator of Gotham Academy Natasha Alterici comes the collection of the sell out series about the Nordic adventures of Aydis, a young viking on a quest that will define her in HEATHEN TP VOL 01

A love story like no other. Two iconic musicians attempting to live a quiet domestic life together.
HENRY AND GLENN FOREVER AND EVER HC

Catch up with the Paper Delivery gang and try to figure out where and when they are in the third volume in this Eisner award winning series from Saga's Brian K, PAPER GIRLS TP VOL 03.

Find out what happens when you die. Perhaps there is no heaven or hell. Maybe a world like no other where you have to fight to survive the afterlife to defend those who you love that have passed before you in DC Metal's Greg Capullo and Mark Millar's, REBORN HC.

Time to lace up your skates and velcro on those knee pads. Slam tells a beautiful story of friendship, derby and stacking it with rad art by Veronica Fish. SLAM TP VOL 01.
Also from Veronica Fish, after surviving a car accident that killed one of her brothers, Wendy is thinking a little bit differently about life. But when she tells her family that her brother is in fact alive and in custody by a flying boy her family thinks she's off in Neverland in the stunning, WENDY PROJECT GN.

And that is that! Spot something there that you just got to have, let us know before close of business Tuesday night and we'll be sure to get it sorted for you. Until next time we catch you, have a great week and stay rad.